Xiaomi Redmi Note 8 is a budget smartphones with a 48-megapixel rear camera. While it does good for its price, you can get better results with Google Camera mod. Here is a look at how GCAM mod stacks up against stock camera. In my review of Xiaomi Redmi Note 8, I called it the smartphone to buy for those who don’t need a 64-megapixel camera. Since publishing that review, I have recommended the smartphone to a number of people. While I’m yet to hear negative feedback, there is another reason to buy Redmi Note 8 over its Pro sibling. With the launch of Vivo U20 and Realms 5s, the contest for best sub-Rs 10,000 has become wide open. While we will deliver the verdict at a later stage, Xiaomi seems to have an edge for now in the form of Google Camera. Also Read - Xiaomi Redmi Note 8, Redmi Note 8 Pro global sales surpass 10 million units in three months

If you are in the market for a new smartphone then the deciding factor could be camera. Most smartphones these days share near identical specifications and finding a good camera still remains difficult. When Google launched its first Pixel smartphones in 2016, it made clear that camera software is as important as the camera hardware. The consequent launches have not only made Pixel the best smartphone camera but it’s software – Google Camera – the best in the business. Since it’s the software from an open source operating system, getting it on other devices isn’t difficult. Also Read - Google Camera 7.2 with astrophotography mode, Pixel 4 UI rolling out to older Pixel smartphones

A number of independent developers work tirelessly to mod Google Camera app for non-Pixel Android devices. I installed a bunch of them and found one that worked the best. The mod does not allow to use all the four cameras on the Redmi Note 8. The portrait mode also didn’t work as well as it does on Pixel smartphones. So, we are primarily looking at the main camera performance in day light and at night with Google Camera. In comparison with stock camera, it becomes clear that GCAM produces pictures that are true to source and has better dynamic range. Here is a look at how GCAM makes Redmi Note 8 an even better smartphone camera. Also Read - Xiaomi Redmi Note 8 Review: For those who don't need 64-megapixel camera 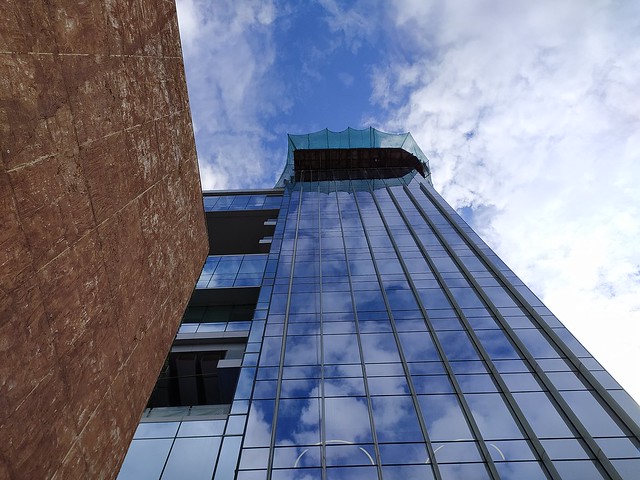 The Redmi Note 8 has a main camera with 48-megapixel Samsung GW1 sensor. This 1/2-inch sensor does not offer the most accurate color readout and camera software tends to make the output punchier for social media generation. When you install the Google Camera mod, you will get images that are more natural in daylight. The examples below demonstrate how GCAM is able to absorb light without over compensating for dynamic range or lack thereof. One of the things I observed is the details preserved outside the center area of an image. Outdoors, the Google Camera has more accurate exposure than stock camera. It is important to note that stock camera is not bad, but there is a legitimate way to click better pictures.

As you can see for yourself, the exposure with the stock camera tends to look soft around the edges. The highlights get clipped in some scenes and white balance can be inaccurate. The Google Camera Mod fixes these issues with natural dynamic range, accurate exposure and white balance. The difference is so subtle that you won’t see them directly on your smartphone screen. One of the things you would notice after switching to GCAM mod is the stability around handling HDR scenes. Xiaomi struggles to maintain a standard HDR profile while shooting in bright light. However, my friends who saw the images preferred stock camera output over that coming from Google Camera. Regardless of which camera software you use, the overall usability of pictures shot with Redmi Note 8 remain high.

When you look at Redmi Note 8 as a smartphone priced at Rs 10,000, a lot of its caveats can be overlooked. However, that does not necessarily mean that it is perfect. Having a Sony-made 48-megapixel sensor, like the one seen on Redmi Note 7, could result in better pictures. But, it could also mean an increase in cost. With that aside, I do think Samsung GW1 struggles with accurate color rendering. If you are trying to shoot flowers or any other colorful subject, the tone mapping is skewed. In some ways, the results look inspired by Instagram filters like the Lark or XPro II. Google Camera, on the other hand, tries to balance even that with accurate exposure and balanced color profile.

One area where the Google Camera comes into its own is low light. Google literally left companies scrambling to build a better night photography experience when it launched the Pixel 3 and Pixel 3 XL with Night Sight last year. The difference in pictures in normal mode and Night Sight is that of day and night. The same experience is available with Google Camera on the Redmi Note 8 as well. When Night Sight is turned on, the results are astonishing and don’t justify the sub-Rs 10,000 price of Redmi Note 8. When Night Sight is enabled, the camera shoots at 12-megapixel resolution and results are bright with little noise. Google Camera also works well to preserve details in the background.

The same is not the case with the Night Mode on stock camera app. With stock camera, you really need to be cautious about being steady. Night Sight, on the other hand, takes into account the occasional shake possible during a handheld exposure. It also does not crank up ISO like the stock camera does in Night Mode. In some of the images you see above the exposure has been set for just 1/5 second with ISO 463. In Night mode, the stock camera also exposes the images for a smaller duration but takes ISO to 9600 levels. Shooting at such high ISO setting with tiny sensor results in a lot of noise. Google Camera Mod, on the other hand, has good color saturation and balances noise very well.

Smartphone cameras are not there yet when it comes to shooting excellent low-light images. However, the progress in the past year alone is a positive sign. The fact that you can take even better images in low-light with an intelligent software sweetens the whole deal. The deal breaker with Google Camera mod is that it does not support portrait mode or let you switch between wide and ultra wide-angle lens. As a result, the mod cannot replace the stock camera. But, if you are a camera enthusiast, who wants to get the most bang out of your investment then Google Camera mod is an app you must download on your Xiaomi Redmi Note 8.