Poco C3 review: A fancy option for buyers on a budget | BGR India

The Poco C3 is Poco’s attempt at doing an entry-level Android smartphone and for the most part, it delivers well. Between this and a Redmi 9, we pick the one that suits you better. So you say you want to buy a phone with a budget of no more than Rs 9,000? What are your options? Realme has its C11, Narzo 10A, Narzo 20A, and C12 on the shelves. Xiaomi outdoes Realme with a vast array of options at similar prices. From the Redmi stable, you have the Redmi 9, Redmi 9i, and Redmi 9A. Under the Poco brand, you have the newly launched Poco C3 starting at Rs 7,999, which is essentially a tweaked variant of the Redmi 9. Also Read - Flipkart starts Dussehra Specials sale: Big deals on Realme C3, iPhone 11 Pro, Poco M2, Redmi 8A and more

Poco has stuck to the business of rebranding Redmi smartphones this year after its separation from Xiaomi and so far, it has worked for the brand. Poco’s original perception of a performance-focused youth brand has now changed to “just another affordable smartphone manufacturer”. The C3 is a prime example of the same and it is clearly aimed at wooing the budget segment for filling in the cash registers. Also Read - Poco's new phone to launch by the end of the year

So, the question obviously arises – why should you consider the Poco C3? After all, it is just a Redmi 9 (review) with an extra camera minus the fingerprint sensor. To answer this question, I took the Poco C3 out for a week and managed to dig out the answers.

2020 has been a sad year for budget smartphones as everyone’s focused on extreme levels of cost-cutting. Hence, you will see a sea of plastic shells trying various ways to draw attention. The matte plastic finish has worked for entry-level smartphones and Poco has stuck to the same. The Poco C3 has a plastic unibody design with a familiar two-tone gradient design we saw on the Poco M2 Pro earlier this year. Out of all the budget smartphones this year, the Poco C3 is one of the few phones that stands out the most. Next to its sibling, i.e. the Redmi 9, it has a bolder dual gradient design. I had the Arctic Blue variant and it looks good by all means, regardless of what this smartphone costs. I also like how Poco chose to place the logo just under the squarish camera hump, probably to differentiate it from the Redmi 9. That said, the Realme C11 still looks the most stylish in my opinion.

The camera hump itself is noticeable but it surely adds that “expensive phone” vibe o the C3. The edges are curved and that helps with the in-hand grip. The plastic panel, however, loves smudges and I had to keep wiping it a lot to keep that blue color shining. Since this is an entry-level phone, the C3 features a micro USB port and a 3.5mm headphone jack. I am happy to see tactile buttons on the C3 – they feel like they will last – please note Realme and Motorola. The front has the same old design with narrow bezels, a thick chin, and a waterdrop notch to hold the front camera. I don’t know whether Poco uses any kind of protection for the glass but in my careful hands, the C3 did not pick up any scratches on its display.

Unlike previous years, budget smartphones these days aim to offer a decent smartphone experience. I have reviewed the Realme C12 and Motorola Moto E7 Plus, both of which impressed me as a smartphone enthusiast. The Poco C3 joins that list too.

Let us start with the display – the most important part of a smartphone. The Poco C3 features a 6.5-inch LCD display with a resolution of 720p – nothing fancy here. This is a good display and unless you are comparing it side-by-side to a Redmi Note 9 Pro or a OnePlus Nord, there’s nothing to complain about. The display gets fairly bright and produces a decent exhibition of colors. For most first-time smartphone buyers, this is more than what you could have asked for. Sunlight legibility is good and you can have a blue-light filter to safeguard your eyes while browsing at night. The blue light filter is part of Xiaomi’s MIUI 12 interface and on a budget phone like the Poco C3, it is amazing. MIUI 12 is what makes using the Poco C3 such a pleasant experience. MIUI 12’s core functions stay the same as it did on a Redmi K20 Pro. On a daily basis, the OS managed to keep up to my demands, with occasional jitters only coming up once I opened some games, or started juggling between a few apps. The new animations and funky UI elements look fresh and for most users, it will keep you busy with umpteen customization options. MIUI 12 brings the “fancy experience” back into budget smartphones.

While MIUI 12 is a great time pass for customization enthusiasts, it tags along a lot of pre-loaded apps and games. Poco lets you uninstall them if you don’t want. However, the OS kept insisting I use the GetApps store to update apps instead of Google Play Store. This is annoying at times but you have to consider the lowly starting price of Rs 7,999 Poco asks for the C3. That said, I kept ignoring these annoyances and the Poco C3 has been delivering a good experience. Part of that “good experience” comes down to the MediaTek Helio G35 chipset, which is one of the most capable chips you can find in a phone under Rs 10,000. Xiaomi, err…, Poco has optimized the software well enough to keep the basic smartphone tasks fairly snappy on a daily basis. It is when you open resource-intensive games such as Asphalt 8 and Shadow Fight 3, the loading times are notably longer. At times, I also saw slight delays in loading YouTube videos and webpages.

The Poco C3 has a decently loud single loudspeaker and for most “speaker-based” tasks, it worked fine. I was able to watch and listen to YouTube videos even at a socially-distant gathering of my family easily. Poco retains a headphone jack and you can always fall back on it for decent audio quality, provided your headphones are good. Call quality was good and my callers had no trouble hearing me. However, the C3 easily drops networks in places where other budget phones keep the bar full. The lack of dual-band Wi-Fi support is sad but for most budget smartphone buyers it won’t be bothersome. I also missed the fingerprint scanner on the C3. The Face Unlock works decently in well-lit surroundings but leaves you at the helm of the passcode at night.

The Poco C3 is quite identical to the Redmi 9 except for the rear cameras. You get the same 13-megapixel main camera paired to a 2-megapixel depth camera for regular photo-taking sessions. The 2-megapixel macro camera is the new addition here. Macro cameras are the easiest way to increase the camera count and I have never found myself using them on any phone, apart from taking sample photos for the review. Nonetheless, the macro camera works nicely. In fact, compared to all other budget smartphones with a macro camera at its price, the Poco C3’s macro camera produces more useable photos. The macro photos hold details in well-lit lighting and even in low light, you will get useable photos, albeit a bit blurry. I was getting the same shots with better clarity using the main camera.

I was impressed by the main camera’s performance during the day and cloudy conditions. Xiaomi’s AI optimizations bump up the color saturation a bit to make the photos lively. The contrasts are decent and so are the brightness levels. Surely, once you zoom in, you will see the lack of sharpness due to the good old 13-megapixel sensor. The lack of a Night Mode means the camera is barely useable at night. However, as a budget smartphone buyer, I am happy with the camera performance. 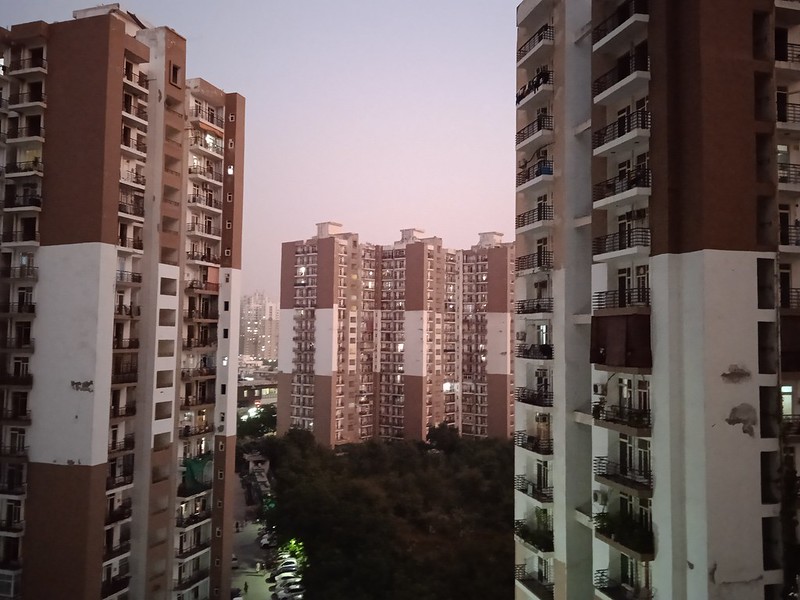 There’s portrait mode for both the rear and front cameras. Portrait photos from the rear setup come out good with nice subject separation, even in challenging lighting. The 5-megapixel front camera takes fairly colorful selfies with nice portrait mode effects. The sharpness is decent as long as you are viewing it on the smartphone. The Poco C3 makes use of a 5000mAh battery and as expected, it can easily last an entire day. I got an average of 5-6 hours of screen-on-time with moderate usage, which involved texting, web browsing, making lots of calls during office hours, streaming songs, and watching YouTube videos. The 10W charging system takes close to two hours to top-up the battery and you need a micro USB charger to accomplish the same.

Poco C3: Should you buy it?

Starting at Rs 7,999, the Poco C3 is a good smartphone for first-time buyers, or for those wanting a cheap secondary phone. It does not stand out in any particular area but it does the core smartphone duties well. It can survive the tough Indian outdoors (unless you hand it to the mercy of a toddler), has ample performance for keeping the wheel turning, and has a battery that lasts an entire day (and then some more if you have a life outside smartphones). The cameras are decent too for kids and first-time buyers. Moreover, MIUI 12 makes for a fancy user experience that no other phone offers in this category (personal opinion, yours may differ).

The Poco C3 comes at a time when every Indian needs a smartphone to keep business going while a deadly pandemic rages outdoors. The cheaper Redmi 9A fits the role of a true-entry-level smartphone but the Poco C3 is meant to appease them with slightly modern features and better performance. It is a good phone and if you are restricted to spend only Rs 8,000, I cannot think of a better phone than the Poco C3 at the moment. Unless you want to save Rs 500, in which case the Realme C11 is almost as good with a more appealing design.