Internet privacy is a figment of our imagination, and that's what US Senate ruling teaches me

Internet privacy is a figment of our imagination, and that's what US Senate ruling teaches me

The US Senate just voted to do away with our idea of internet privacy.

I live in India. Am an Indian by nationality, residency and citizenship. I don’t see a direct connection with matters of the US, besides amusing news reports that keep cropping up. For that matter, I do not see a direct impact on my life from the developments of the US Senate. Or so I think. On Thursday, the US Senate just made it easier for any internet service provider in the US to share sensitive information about their users. Also Read - Internet down: Zomato, Paytm, Disney+ Hotstar, Amazon, Myntra, many other global services suffered massive outage

The online privacy debate isn’t new. Over the past couple of years, there have been several debates around the need to protect user rights on the internet. SOPA was a bone of contention among users, regulators, activists and the industry at large. For the uninitiated, SOPA (Stop Online Piracy Act) was a bill introduced in the US that was widely regarded as a threat to a free and an open internet. Although after firm resistance from the industry, the bill was struck down during the Obama regime. Also Read - Mobile internet services suspended on Delhi borders till February 2

However, since a change of guard at the US government, the FCC (Federal Communication Commission), which is a body responsible for recommendations of communication policy has taken steps in favor of the telecom industry rather than welfare of users. ALSO READ: China exceeds India in internet usage, smartphone ownership: Pew Research

As I mentioned, I should have no reason to bother about any of this development. But what stands out for me is the manner in which the debate around user privacy and security has panned out. On the positive, I’m very hopeful of India’s telecom regulator TRAI for the manner in which it has always made recommendations that have stood by the Indian consumer, be it tariffs, mobile number portability or net neutrality. All of that sounds good, but when the world looks to the US as inspiration for policy, it suddenly becomes a concern. Especially in an age when several governments across the globe are inching towards absolute control over communication and curbing information flow. 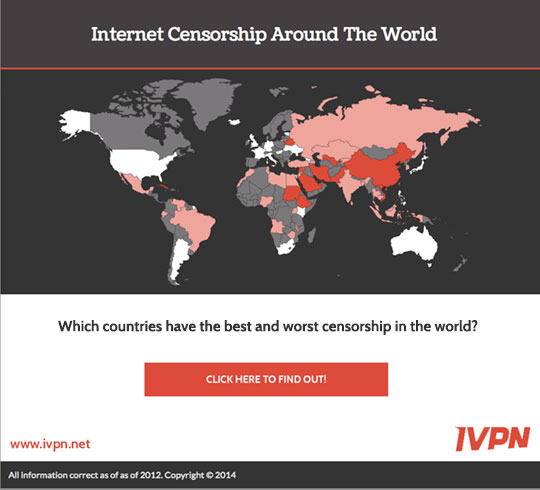 Internet Censorship Around The World | IVPN.net

In the past, Tim Berners-Lee had said, that although the government has the right to monitor the internet, such monitoring agencies must be held accountable to the public. During a Reddit AMA, he had said, “I think that some monitoring of the net by government agencies is going to be needed to fight crime. We need to invent a new system of checks and balances with unprecedented power to be able to investigate and hold the agencies which do it accountable to the public.” ALSO READ: Snowden should be protected, says the inventor of the Internet.

It is apparent from these developments that telecom and technology policy is following in the footsteps of political objectives, which opens up a pandora’s box during uncertain times. Till the time policy across the globe hovers around upholding the right to privacy and security of internet users, I’d somehow be sceptical of the existence of a secure, private and neutral internet. And I truly believe there’s much ground that needs to be covered on that front.