The Lenovo ZUK Z1 runs on Cyanogen OS and could shake up the sub-Rs 15,000 smartphone segment. Earlier this week, Lenovo launched a new smartphone under its online only ZUK brand. Called ZUK Z1, the smartphone is aggressively priced at Rs 13,499 and comes equipped with an impressive set of specifications and features at its price point. Besides a metal frame and unibody construction, it also features a fingerprint scanner embedded within the home button. However, one of the key highlights of the smartphone is that it runs on Cyanogen OS out-of-the-box. This also marks the end of exclusive partnership between Micromax and Cyanogen in India. After using the ZUK Z1 for some, here are our first impressions. Also Read - Lenovo K13 seems to be a rebranded Moto G10: Take a look

Design
Right from the moment you first hold the smartphone in your hand, you’ll notice it’s completely different from the current Lenovo offerings. It sports a unibody design and a metal frame with diamond-cut chamfered edges. The build quality of the Z1 is pretty solid and the smartphone looks sturdy too. Also Read - Lenovo ThinkPad X1 foldable PC launches in India finally with a steep price tag Up front, you have the ambient light sensor, earpiece and a front-facing camera above the display, and a physical home button embedded with a fingerprint scanner below the display. The app switcher, back and home buttons are on the display itself. The capacitive keys are also available on either side of the home button, and you can turn off the on-screen ones from the settings. Turn to the back, you have the thick plastic back, which is non-removable. The top part has the camera sensor with LED flash and there is the ZUK branding at the bottom. On the left edge, you have the dual nano SIM card tray, whereas the right edge has the volume rocker and power / sleep button. The buttons placement is good, which makes them easily accessible. The top left corner has a 3.5mm audio jack and the bottom has speaker grille, an opening for the mic and a USB Type-C port as well. You’ll also notice the plastic strips running across the top and bottom, which also adds to its aesthetics.

Now, the new connectivity port has an advantage and disadvantage of its own. As it is a reversible connector, you don’t have to worry about which side is up or down. The disadvantage is, you’ll always have to carry the data cable wherever you go, as most people may have the one microUSB cable. Overall, we like the clean design of the ZUK Z1. Display and hardware
The ZUK Z1 houses a 5.5-inch full HD (1080p) LCD display with a pixel density of 401ppi. The display is pretty bright and it offers good viewing angles too. The color reproduction is also good, although not as punchy as those on Super AMOLEDs, but it’s pretty much more than you can ask for its price tag. The whites are fairly bright and the black levels are deep too. At the heart of the Z1 runs Qualcomm’s Snapdragon 801 quad-core processor clocked at 2.5GHz. It is paired with Adreno 330 GPU and 3GB of RAM. The processor is a little old, but a flagship one of its time. It has powered the likes of HTC One M8, OnePlus One, Xiaomi Mi 4 and the Samsung Galaxy S5 among others. The smartphone comes with 64GB of onboard storage, which should be decent enough to suffice your needs. Sadly, there is no option to expand it further. Other features include Wi-Fi 802.11ac, Bluetooth, GPS and 4G LTE connectivity on both SIM cards. The ZUK Z1 is armed with a 4,100mAh battery, but it does not support Qualcomm’s Quick Charge feature. Yet, we noticed that the smartphone charges pretty quick.

Software
One of the major highlights of the ZUK Z1 is that it runs on Cyanogen OS. It is based on Google’s Android 5.1 Lollipop, and an update to Android 6.0 Marshmallow is also due sometime in the coming months. You get tons of customization options including the themes app, which lets you change wallpaper, icons, fonts, status bar, controls and even the boot animation. There are plenty of free and paid these to choose from, offering you an instant way to customize the interface of your smartphone.

It comes pre-installed with Google apps, such as Google Drive, Gmail, Hangouts, Maps, Photos, Play Music, Chrome and YouTube. There is also Cyanogen’s Audio FX music equalizer which lets you tinker around with the audio listing experience. It also gets the TrueCaller integration, just like other smartphones running on Cyanogen OS.

The interface is very slick, fluid and snappy. During our brief usage, we did not face any lags while navigating through the UI or while switching between apps. Even the fingerprint scanner is pretty quick in unlocking the smartphone. Cyanogen OS on the Z1 also supports double-tap to wake the screen, which means you don’t have to run around looking for the power / sleep button. This is especially true for those who have small hands. We will talk about Cyanogen OS in more details when we review the smartphone.

Cameras
The ZUK Z1 comes equipped with a 13-megapixel rear camera (Sony IMX214 sensor) with OIS (optical image stabilization). While the OIS feature is generally found in upper mid-range and high-end smartphones, it’s good to see the feature on a sub Rs 15,000 device. Up front, there is an 8-megapixel front-facing selfie camera. If memory serves us right, the ZUK Z1 could be the most affordable smartphone with OIS. The camera interface is neat, clutter free and it’s surprisingly very snappy too. We did not notice lag while using the camera but one thing we did noticed while using the camera was that the back of the device gets a little warm on using it for over five minutes. We used the both camera indoors and outdoors, and the results were surprisingly good, better than we expected. You can check some of the sample photos below. 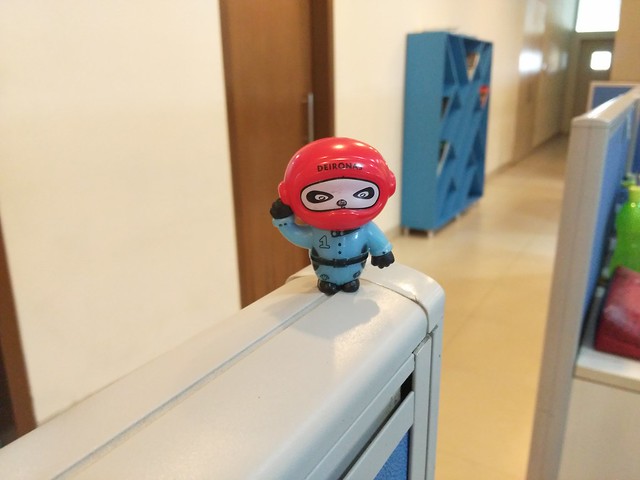 Indoor photos look good, but at 100 percent crop, it tends to lose some sharpness. Same goes with the outdoor photos. The camera also supports 1080p video recording. The front-facing camera is good – something that selfie lovers and Snapchatters would really appreciate. However, we will reserve our judgment until we review the smartphone in detail.

On the whole, the ZUK Z1 looks like good package in its price range. With a price tag of Rs 13,499, the smartphone will go heads on with the likes of Xiaomi Redmi Note 3 (32GB) and LeEco Le 1s. Based on our first impressions, we’re really excited to see how the ZUK Z1 fares during our daily usage. We’ll soon come up with our detailed review.