With ramped-up specs, unique design, top-class internals, the ROG Phone 5s can be taken as one of the best gaming phones in the market. But there are a few factors that you need to consider before making the final purchase decision. Asus ROG Phone has earned the dominator title in the gaming phone segment. Over the years, Asus has managed to refine its products and each new iteration has advocated the company’s gaming masthead. While the brand is keeping up its efforts to bring the perfect phone for mobile gamers, the Asus ROG Phone series is undeniably setting a benchmark in this segment. With the new year, Asus has once again refreshed its lineup in India with the new ROG Phone 5s series. Also Read - Asus announces ROG Flow X16, ROG STRIX SCAR 17 SE gaming laptopps: Check details

Priced starting at Rs 49,999, the new ROG Phone 5s has a lot to offer and add another reason for excitement for gamers who desire a console-like experience in a pocket computer. The ROG Phone 5 with an ‘S’ is based on the original model, however, there are a few incremental the company has implemented that differentiates the product from the vanilla variant. With ramped-up specs, unique design, top-class internals, ROG Phone 5s can be taken as one of the best gaming phones in the market. But there are a few factors that you need to consider before making the final purchase decision. Here’s our review. Also Read - Asus launches Zenbook 14X OLED Space Edition, 5 more laptops in India: Check details With aesthetics borrowed from the previous gen, the ROG Phone 5s yet again brings on the deck the immersive gaming experience. It’s a huge phone, no doubt, but the compact machine’s minimalistic design makes it convenient to throttle games round the clock. The haptics are top-notch, and vibrations feel solid. Like the standard model, the phone gets squeezes, swipe inputs, and an in-display fingerprint scanner which is quite apt and responsive. Moving to the front, Asus has implemented a gorgeous 144Hz AMOLED display. The wide panel is HDR10+ compatible. The big, vibrant display is super responsive and fluid. Gamers who are engrossed in fast-paced titles would certainly have a good time with this gaming device. The 144Hz panel befits graphic-intensive games. The touch sampling rate, response time is rapid, even while streaming content on OTT platforms, the display felt immersive. The UI offers a bunch of options to tweak the display settings as per your preference, like calibration menu, different colour modes, to name a few. The ROG Phone 5 was a gaming beast, and the new Phone 5s underpinning the title deliver a similar powerful performance. Every game loaded processes quickly and fast as a beetle. As we’ve mentioned before, the haptics feels solid, and Air Triggers help make the best out of it. Whether it’s BGMI, Call of Duty: Mobile, or Real Racing 3, the phone gobbles up everything without any hiccups. The only caveat that we faced was heating on the rear panel during long gaming sessions. Although it felt tepid initially, after about 15 minutes of gaming, the device heated up substantially. There is Aero Active cooler accessory that is meant to keep the temperature down, though, we didn’t get the luxury to try it out. As for day-to-day tasks, switching between apps, surfing multiple tabs on the browser, and taking snaps didn’t show any lag during our testing. Overall, the new ROG Phone 5s is one of the fastest phones you’d get in the market right now. Even the benchmark scores stanchion the phone’s glorious title. The dual speakers further levitate the performance, courtesy of GameFX and Dirac HD Sound. The stereo speakers yield a balanced output and enhance the overall experience, be it playing videos or games at a decent volume with good stereo separation. The integrated microphones render good voice quality as well.

Nothing has changed on the software front though. While we expected the new iteration to come loaded with Android 12 OS, Asus has kept it neutral putting the previous mobile OS with proprietary ROG UI skin layer on top. For those who have used the Phone 5, they will barely find any difference. New kids on the block can check our previous review to get details about the ROG software. There are specific gaming themes and a traditional skin that aligns with stock Android. The Armory Crate primarily dedicated to gaming lists out the games that support high refresh rates and customizes the software and hardware experience. You can adjust the Air Triggers as well. Game Genie that acts as a quick toggle helps in optimizing the game settings. We enjoyed playing BGMI with capacitive buttons on, especially the split buttons that gave us an edge with a few swift kills. Another advantage is the Scout mode that makes it easy to spot enemies in FPS titles. To say, the UI is flexible, and you get a myriad of options to tune in as per your usage.

While it’s a gaming-centric smartphone, Asus has embedded a decent tray of sensors that can shoot fairly good shots in daylight. The primary camera manages to shoot detailed shots under good lighting conditions. We did observe the colour tone shifting to yellow tint to an extent in a few photos. Although, the cameras managed to render natural colours with decent clarity and good depth of field. The low-light performance was fairly decent, although there’s a bit of struggle with focusing and images appeared flat, especially with the ultra-wide lens. Moving to the front, the selfie camera captured respectable selfies provided there was sufficient lighting around the subject. 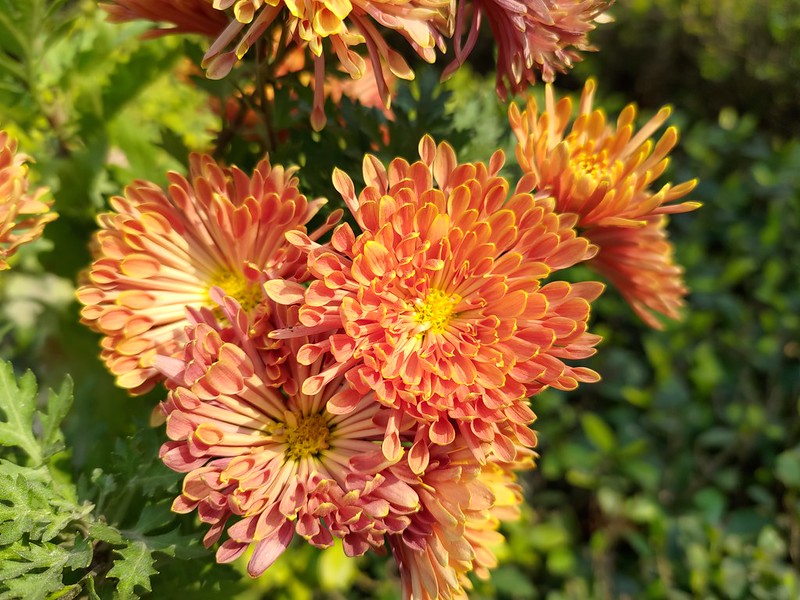 Much like cosmetic similarity, the new ROG Phone 5s has the same battery capacity as the older sibling. The split 3,000mAh cells are placed on either side of the CPU, and Asus claims the arrangement to lower temperature generation while charging the battery. As for real-life performance, we got about 10-11 hours of backup with mixed usage. Casual/light usage can easily give you over a day’s worth of usage. The phone bundles a 65W adapter that amps up the battery to about 55 percent in 30 minutes. The device supports Power Delivery 3.0 and Quick Charge 5 as well. The gaming phone section still takes a small chunk in the Indian smartphone market. While many leading brands are sweating their palm off to bring gaming-focused phones across a varied price range, Asus’s ROG breed still takes up the sweet spot. ROG Phone 5s continues the legacy with its hefty specs. Although it is targeted as a gaming phone, it’s a good all-rounder that provides a perfect combination of playing games and enjoying content. If you are into hardcore mobile gaming, then the new ROG Phone 5s would rightly fit the bill. However, for those who already have the ROG Phone 5, we would recommend upgrading to the Pro version, if they want some new mix on the rear side.