Asus ROG Strix Scar 15 is a beast of a laptop when it comes to specifications. But does all of that convert into real performance? Let's find out. A lot of people have taken up gaming during the lockdown phases of the Covid-19 pandemic took up gaming as a hobby. Now with the world a bit more open than before, a lot of you could be looking to make the shift from mobile to a gaming laptop for better gameplay dynamics, larger game selection or even for better graphics. If that is the case then you can take a look at the new Asus ROG Strix Scar 15. Not only is the new ROG Strix G15 more compact compared to the last-gen, it is also one of the only machines you can get with the Nvidia RTX 3000 series graphics cards. Also Read - Best laptops under Rs 50,000 for work or studies in India in September 2021

For the uninitiated, the Nvidia RTX 3000 series graphics cards are currently extremely hard to get a hold of, due to the global silicon shortage. Apart from this, seeing the overall specifications the new ROG Strix SCAR 15 is simply what you can call a beast. But does all that specification prowess covert to actual performance or should you just save your money to get a different option? We will answer this question along with a few others here in our review. Also Read - Best 12GB RAM phones for gaming to buy in September 2021

In terms of size, the new ROG Strix Scar 15 gaming laptop is much more compact compared to the previous generation. However, it has still managed to keep the design elements that were loved in the previous generation like the hefty chin underneath to push the laptop upwards without the ergo lift hinge design. Moreover, the company has also added a few elements like a translucent front plate and a replaceable hinge shoulder, which simply add to the look of the device. Apart from the physical design cues, the laptop also features a lot of RGB lighting also, which just adds to the gaming aesthetics. The laptop features lightbars around the front and the sides along with another lightbar under the screen. The ROG logo is also RGB lit as always. All of these lights are synced to the keyboard’s illumination, which can be controlled by the user. Both the main chassis and the lid on the ROG Strix Scar 15 powerful gaming laptop feature a solid build and it feels like the laptop can take a lot of beating. You can even pick up the laptop from the screen without much flex. The front lip corners are also quite blunt, which comes in handy while typing or gaming for long as they do not dig into your wrists. But not all is good about the design. I felt that the screen lean is not as much as I would prefer, with the display not laying flat. Another thing I did not like was the implementation of the KeyStone, which leaves a huge gap in the chassis, where I would have liked having an SD card reader or a fingerprint sensor. The laptop also does not come with a webcam, so streaming gameplay with your face in it is going to be difficult. To rectify this, the company does provide a webcam module along with the laptop, but it is a chunky accessory that is made out of glossy plastic, which scratches easily. And storing it is another headache. The best thing apart from the performance and the display I liked about the ROG Strix Scar 15 laptop is its keyboard with optical-mechanical switches. The clicks were satisfying and the key travel was ample. This made playing FPS games very easy. Typing using the keyboard was also a good experience at first, however, due to the hardness level and the key travel distance, it quickly became difficult to use the device for typing. However, this could be because I am not used to mechanical switches. The trackpad is also massive and quite responsive. Due to the keyboard not featuring a NumPad, the company has integrated a digital NumPad into the trackpad. This is not a new feature that the company has introduced, instead, it is one that has been there for a long time on various other Asus laptops. The digital NumPad works just as usual. I personally do not like it, but some people might. Overall, the trackpad glass seems quite sturdy and the clicks are satisfying. The trackpad feels fast, reliable and accurate. The display is colour accurate and quite vibrant and bright. Apart from playing games, I did use the device to watch a few movies like Batman v Superman: Dawn of Justice, Iron Man 2 and more, and while watching these I was pleased with the details I could see and the overall immersive feeling the display was able to provide me with. The display was also great to play video games like Batman Arkham Knight, CS:GO, Call of Duty Modern Warfare and more. While playing games the 165Hz refresh rate also came in handy making the overall graphics play very smoothly. I personally feel that the 165Hz refresh rate was enough for most games, however, if you want a faster display for competitive games then you can go for the full HD model.

While playing games I also noticed that the 10ms response time was at times the difference between death and staying alive in FPS games. The fast response time made it very easy to take kills while making fast moves. The panel was quite good, but when the brightness was turned to the peak, I noticed that the blacks could have been a bit darker. This could be a result of using an LCD panel, but could also be due to an increase in contrast while turning up the brightness.

I also noticed light bleeding through the display edges. This could be a unit defect. Overall, the display panel is quite nice and really good for gamers. If you are not primarily a gamer but want the laptop for a different use, you will still feel satisfied with the display.

The laptop was easily able to chew through all of the basic tasks that I had to throw at it. The laptop did not even stutter, even after me opening around 148 tabs in three browsers (multiple windows of course). So if you are only looking at it to fulfil daily basic tasks, then this laptop would not even break a sweat once during its lifetime.

Now onto more demanding tasks like gaming and video editing. Initially, with the laptop just whirring up, I found the performance to be at its peak with me getting over 300 frames per second, however, after every 15 minutes of gaming, I found that the game was losing 15 to 20 frames each time, capping at around 270 frames.

I had a similar experience running Cinebench R15 over 15 times in a loop, with each consequent test showing a 1 to 2-second delay. However, the tests revealed that there was no performance degradation or throttling of any sort. Take note, during longer gameplay I found that the CPU did run hot with the fans whirring at full speed. After a point, the thermals were so hot that it was hard to rest my hand on the laptop and game. Even the keys started burning up.

In basic words, the system was able to run all heavy games I played, including Call of Duty: Modern Warfare, GTA V, PUBG, Watch Dogs Legion and more, with ease. I personally did not feel that the performance dropped by a lot during testing. What I felt went wrong was with heat management. The laptop heated up a lot during gameplay. While rendering videos, I found that the laptop was able to handle the workload of pushing out a 15 minute 8K resolution video in Adobe Premiere Pro with ease, but when I touched it I found the laptop to have gotten extremely hot even with the fans whirring up at full speed constantly. I personally recommend that if you are looking at this laptop to be your primary gaming machine, then you should invest in an external keyboard and mouse. Just to be safe. I had faced similar heating issues with the Ryzen 3000 series and 4000 series chipsets.

Overall, I like the laptop’s performance, but the heating issues are what is keeping me at an arms distance from wholeheartedly accepting it. Coming to the battery, the device features a 90Wh battery, which is a huge upgrade compared to the 66Wh battery of its predecessor.

During daily use with me typing, browsing the internet and watching a few YouTube videos, the device managed to provide me with a battery life of around 7 to 8 hours with sporadic usage. With a bit heavier browsing, with more tabs open, watching videos on Netflix and more, the laptop managed to last me around 4 to 5 hours. Lastly, while gaming, when most of the laptop’s power was being put to use, I managed to gather only around 1.5 hours of battery life, which was sort of expected. I was a bit surprised that the laptop did not drain out within an hour of usage at that time. The laptop comes with a 240W charging brick, which fills up the whole battery within about two hours. It also supports 100W PD charging, but I did not have access to a 100W PD charger, so I could not test this out.

Asus ROG Strix Scar 15 gaming laptop is a beast in its own way. The only thing that is holding me from giving it the full 5 stars and a nod to buy is the thermal management and a few little quirks here and there. Most of these quirks can be ignored, but heating is an issue that I feel needs to be looked at by the company. 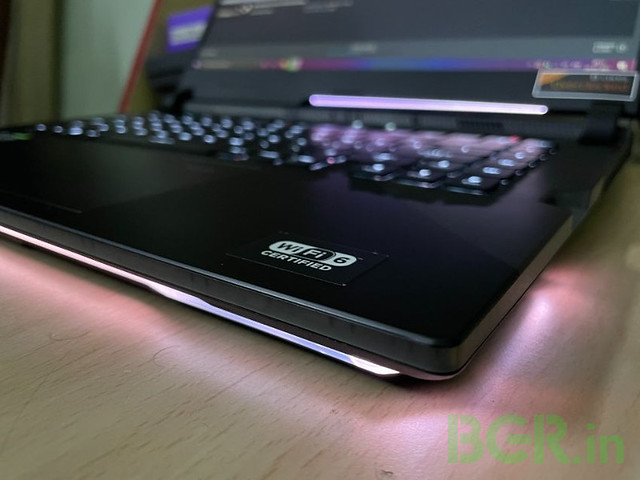 Overall, I feel this laptop is an extreme beast and if you are willing to adjust a bit, it will be a machine that you will end up driving for over 5 years and it still would manage to get all work done.