There’s been an incessant rain of affordable smartphones ever since the COVID-19 pandemic hit us. The fledgling economy as well as increased taxes have pulled customers from pricier phones to the “more sensible seeming” ones costing less than Rs 10,000. After all, you are getting all the smartphone essentials at much lower prices. Note the word “essentials”. Realme and Xiaomi have bombarded the sub-Rs 10,000 segment with a dozen of new phones, all varying in essential features. Motorola has now joined the game with its long-standing E series smartphone, called this time the Moto E7 Plus. Also Read - Motorola-branded Smart Refrigerators with Wi-Fi tipped to launch soon in India

This isn’t the first time Motorola has launched a sub-Rs 10,000 smartphone in 2020. Back in the summer, it came up with the G8 Power Lite and it drew mixed responses. The G8 Power Lite had good camera performance for its price but lagged in the performance section. The Moto E7 Plus aims to fix that with a couple of changes but doubles down on the camera efforts. At the same time, Motorola hasn’t let gone of improving the essential functions that matter on a daily basis. It costs Rs 9,499 and for what it offers, I think Motorola deserves a pat on the back. Also Read - Motorola teases Razr 5G, smart home appliances for India this festive season

Motorola brings trendy designs to the lower end segment. This year, the Moto G9 played on the popular design trends with its square camera hump. The E7 Plus isn’t different and given its “budget ambitions,” it carries the same design, albeit with compromises in the finish. It’s a unibody plastic construction here and Motorola opts for a matte finish with a slight gradient color. The rounded square hump has two cameras in it with an LED flash. Also Read - Motorola Moto E7 Plus launched in India: Price, specifications, and more With a capacitive fingerprint sensor christened with the famous Motorola logo and the chrome ring, I think the Moto E7 Plus is the classiest looking phone in its category. All the design touches only add to the visual appeal of the phone. The front has the same old narrow-bezel display design with a waterdrop notch and fat chin. Similar to most 2020 Moto phones, the E7 Plus gets a dedicated Google Assistant key. The buttons themselves are mushy and I doubt their reliability in the long run. That said, I carried the phone in the same pocket holding my car keys and coins, and I did not spot a scratch or dent on the front glass. The plastic back, however, did show faded color spots.

While most of the elements on the Moto E7 Plus are modern, the phone still contends with a micro USB port. Additionally, even with all the plastic build, the E7 Plus weighs 200 grams, which is heavy by all means.

Nonetheless, the E7 Plus has a promising build quality overall with a classy design. Motorola, however, needs to fix the button quality on its phones and try some weight-shedding.

The Motorola E7 Plus, like all its rivals, offers a 6.5-inch display. Like most of its rivals, it offers an IPS LCD panel with a resolution of 720p. A 720p resolution panel on a larger 6.5-inch canvas doesn’t make for good sharpness. This is where the Redmi 9 Prime takes the lead with its 1080p LCD display, just for an extra Rs 500. If you don’t pixel peep though, you will be glad to know that display performance is neat. It renders good colors with ample contrasts and decent brightness levels. Sunlight legibility is good as well. The bigger canvas means watching YouTube or playing Candy Crush on this display is an enjoyable experience. For what this phone costs, I am sure most people would find the display “good enough”.

Motorola has given some attention to the performance bit. Unlike other brands using a weaker MediaTek chipset, it has given the E7 Plus a new Snapdragon 460 chip. The Snapdragon 460 is closer to the Snapdragon 665 in terms of performance, at least on paper. To help its cause, there’s 4GB RAM on board along with 64GB storage.

The Snapdragon 460 is a capable performer and in daily use, it manages to keep lags and stutter at bay. I used the E7 Plus for web and social media browsing, sending emails, making calls, taking video meetings, streaming music, and shooting pictures – never ever did I found the E7 Plus struggling for breath. I have seldom seen a sub-Rs 10,000 phone perform so smoothly. I tried a few casual games such as Candy Crush, Among Us, and a few more. All of them played along nicely without any hindrance. One of the main reasons why the E7 Plus performs so nicely is the near-stock Android experience. Motorola ships the phone with a clean build of Android 10 sprinkled with its tasteful personalization features. First debuting on the Moto One Fusion+, the Styles feature on the E7 Plus lets you tweak accent colors, icon shapes, and fonts to get a unique version of stock Android. The interface is free of third-party pre-loaded junk, save for the Facebook app as well as the Google suite. Compared to everything else in this price category, the E7 Plus offers a truly polished and qualitative user experience.

Another area where the Motorola E7 Plus shines is good audio quality. Audio output via the headphone jack is good and based on the quality of your earphones, you will get decent audio performance. The loudspeaker output is average though. I used the phone with my Jio SIM card and call quality over VoLTE and VoWiFi was excellent. Sadly, the phone only comes with single-band Wi-Fi limited to the slower 2.4GHz. I found Bluetooth connections to wireless earphones and speakers reliable. Another bummer was the lack of a compass sensor. While using navigation maps like Google Maps or Uber, the phone was unable to detect the directions on its own.

This is where the Motorola E7 Plus shines. The G8 Power Lite’s camera was tuned nicely but it was pulled back by a mediocre sensor. Motorola has used a 48-megapixel sensor for the main camera with a lens aperture of f/1.7. Paired with intelligent algorithms, the E7 Plus puts on a good show, both in daylight as well as night. In daylight, photos carry a decent amount of details with bright colors and high contrasts. Colors are boosted slightly to enhance appeal but the camera never overdoes it. Compared to the cameras from Redmi 9 Prime and Realme C12, the Moto E7 Plus’ camera rocks in daylight situations As light levels start dropping (evenings and indoors), the main camera starts struggling with sharpness but it does not leave the pursuit of bright colors and details. In night conditions, the Night Vision mode takes long exposures to take in more light. It does not capture details as the more expensive Motorola phones but it still comes up with photos that I can use on social media. Compared to the night mode of any other phone at this price, the Moto E7 Plus absolutely crushes everything.

The 2-megapixel depth sensor does its job well in portrait mode photos. The depth detection is good and subject separation is on par with other Motorola phones, i.e. the cutout around the subject is good most of the time. 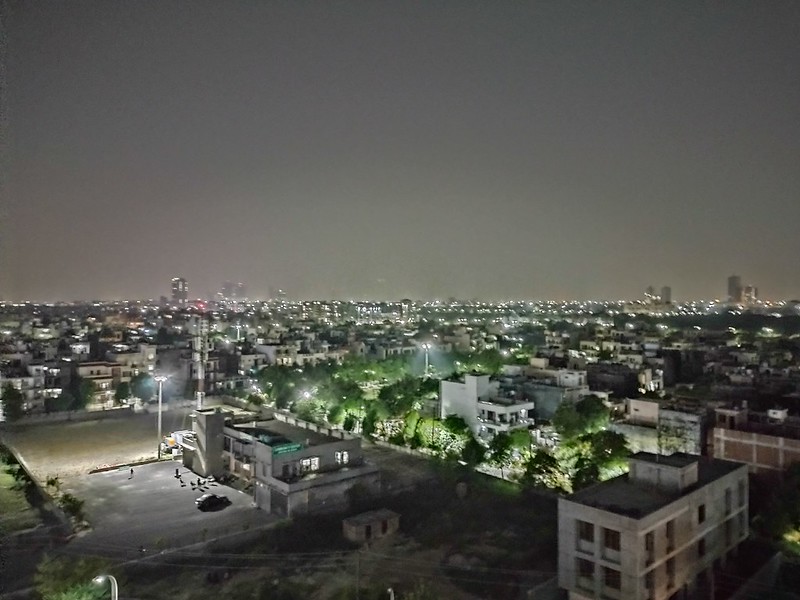 Video quality is okayish from the main camera. In daylight, the videos look colorful and bright but there’s a struggle with exposure and details as soon as light levels start falling. You can shoot 1080p videos at up to 60 fps.

The 8-megapixel front is good enough with selfies. Photos carry vibrant colors with ample details and good exposures. In low light tough, you should ensure good ambient lighting to keep the photos well-lit. Motorola has focused on having longer battery life on all its 2020 models with a 5000mAh unit. The E7 Plus also gets the same big battery as the G9 but for some reason, it could not manage to last more than a day. Now, this could be due to my unit running an early software build and Motorola may need to fine-tune the OS with an update. My usage includes web and social media browsing, sending emails, making calls, taking video meetings, streaming music, and shooting pictures – the E7 Plus ends the day with 35-40 percent left.

Sadly, charging the E7 Plus is a painfully slow experience. The 10W charger takes almost over two hours to fill up the battery from 30 percent on an average. An 18W charging system could have made life easier for E7 Plus customers.

Verdict: Should you buy the Motorola E7 Plus? I won’t beat around the bush – the Moto E7 Plus has the best camera in a smartphone for less than Rs 10,000 in 2020. This alone is the reason you should put your faith in the E7 Plus and order it from Flipkart.

I haven’t run out of reasons to suggest the E7 Plus. It impresses with a quality user experience, thanks to the clean Android UI, and strong performance, courtesy of the solid Snapdragon 460 SoC. Battery life is good too, although there’s scope for improvement here. Lastly, the design is trendy and it stands out among the phones from Redmi and Realme with its classy touches.

Is there a reason you shouldn’t buy the Moto E7 Plus? To nitpick, it still uses a 720p resolution display and a micro USB port. These are negligible issues, given the rest of the package is tempting. For those seeking a quality user experience and great still camera performance, the Moto E7 Plus at Rs 9,499 should be on top of your list.