The pricing of the OnePlus 10 Pro brings it awfully close to the Samsung Galaxy S22 series, iQoo 9 Pro and most likely the upcoming Realme GT 2 Pro OnePlus 10 Pro was being touted as a very important device for the company. The smartphone was being perceived as the final turn of OnePlus towards Oppo. However, that didn’t happen. We are still left with a OnePlus device that tries to be, well, itself. There’s a lot to talk about the OnePlus 10 Pro, right from the polarizing design to the Hasselblad 2.0 camera performance. The device sits comfortably in the premium range and is competing with both tried and tested brands like Samsung and Apple as well as against some relatively new brands like iQoo and Realme. Also Read - OnePlus Nord starts receiving Android 12-based OxygenOS 12 update: Check details

The delayed launch has also pinched a lot of OnePlus loyalists in India and other countries apart from China. Will the OnePlus 10 Pro be able to make up for that delay? Let’s find out. Also Read - Smartphones launching next week: Vivo X80 series, OnePlus Nord 2T and more The OnePlus 10 Pro design could be polarizing

The OnePlus 10 Pro design is easily one of the most polarising aspects of the smartphone. I had seen plenty of pictures and videos ahead of the final reveal and my thoughts didn’t change much after I received the review unit. We had the Emerald Green variant. The camera island design is a bold move from OnePlus. I personally like a more simple OnePlus 9RT-like design. However, a lot of people who I showed the device, loved the emerald green rear panel as well as the unique camera island. Also Read - OnePlus Nord 2T tipped to launch in India on May 19: Check expected price, specs

Both the back and front of the phone are made of glass. The rear panel has a frosted finish. It does a very good job of keeping fingerprints and smudges away. The only drawback is that it gets slightly slippery. This can be solved easily by using the cover bundled with the smartphone. In my opinion, the phone looked much better with the cover on, considering I’m not a fan of Emerald Green.

Let’s talk about the elephant in the room. The OnePlus 10 Pro became (in)famous after the device was put through an endurance test by YouTuber Zack Nelson. He is popular as JerryRigEverything. In the test, he had imported a OnePlus 10 Pro from China. During a bend test, he literally snapped the phone in half. I didn’t want to put the same kind of pressure on my review unit. However, I can verify that the device didn’t bend after applying a mild force.

The OnePlus 10 Pro seems well balanced in terms of weight distribution, even when compared to the previous generation OnePlus 9 Pro. The good weight distribution and thin bezels actually make it feel much more compact than it really is. The massive 6.7-inch display and equally massive 5,000mAh battery are also well managed within the device’s footprint. OnePlus 10 Pro is the first device from the manufacturer to get an AMOLED LTPO2 panel. It means the refresh rate can sway from 1Hz to 120Hz in accordance with the content on the display. The 6.7-inch panel can reach a peak brightness of 1300 nits and it seemed more than enough for bright outdoors.

The 2K display is pretty sharp and fun to use. The default is at FullHD+. You will need to change it to 2K resolution in the setting. A screen guard comes pre-installed with the phone but OnePlus has provided Gorilla Glass Victus for protection.

The curve on the sides of the display is minimal and it hits the right spot when it comes to viewing experience and ergonomics. The touch response feels snappy, thanks to the 120Hz refresh rate.

OnePlus 10 Pro comes with Qualcomm’s latest Snapdragon 8 Gen 1 chipset. This was one of the first few devices to launch with the Gen 1 chip. But, by the time it launched in India, there was a strong line-up of competition waiting for the 10 Pro. The chipset in itself has been facing some criticism for throttling issues as well as heating. However, the OnePlus 10 Pro balances the thermals without compromising performance.

In terms of gaming, whatever you throw at it, it will sail through. I played both New State and BGMI at UltraHD graphics and Extreme frame rate. The device handled it with ease. After 10 minutes of gaming in this graphics setting, your device will get heated up but not uncomfortable to hold. The temperature remained almost static for the next 15 minutes of gaming.

In day-to-day tasks, OnePlus remained true to its origins. The phone felt snappy. You can even adjust animation speeds to make it feel snappier. Since OxygenOS is here to stay, for now, OnePlus loyalists won’t feel like they are moving to a brand new UI. OnePlus 10 Pro back cover that comes with the device. (image: Danny Dcruze)

OnePlus 10 manages to retain the 5000mAh battery unit. The battery life came to me as a surprise. The LTPO2 display seems to be doing its job really well. In my testing, the device lasted well beyond a day. Despite playing games on high settings for around 40 to 45 minutes, the phone did not conk off on me. Instead, it lasted me for another half a day without charging. With light to moderate use, you could even push it for 2-day battery life. This battery experience is pretty rare in the world of flagships.

The phone gets 80W fast charging support with a charging brick bundled along with it. The phone managed to give me a day’s worth of battery in a 15-20 minute charge. While the OnePlus-Oppo merger has gone back to a state of limbo, the charger still says SuperVOOC instead of the usual Dart charging on OnePlus devices. The underlying technology is the same. OnePlus 10 Pro camera is its headlining feature due to the brand’s partnership with Hasselblad. However, the camera still remains the leash holding up OnePlus’ true flagship potential. The colour science has definitely improved with the new camera module. The shots taken on OnePlus are pretty accurate in terms of tones. Besides that, there’s one gripe that still remains. The colours of the pictures clicked using the 150-degree wide-angle lens and the primary 48-megapixel lens were drastically different. OnePlus should roll out a fix for this issue.

Daylight shots are as great as expected, up there with most other flagships in this price range. The low light pictures capture enough light and the tones are also accurate. However, the camera loses details in order to keep the noise levels low. This shouldn’t be a deal-breaker however. 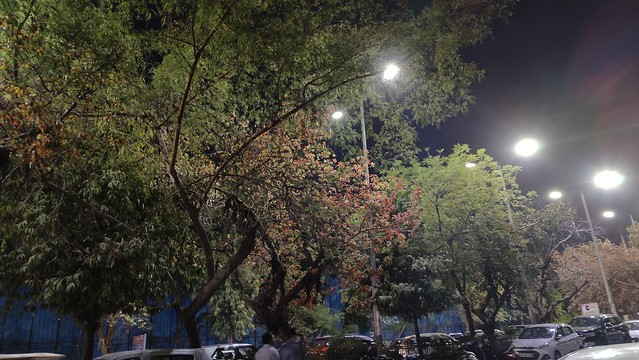 OnePlus 10 Pro camera samples
OnePlus camera UI remains one of the fastest in the segment. You will definitely get the satisfaction of a quick click. The Pro mode is also pretty easy to use. OnePlus still offers a PAN mode, for some unique-looking frames. The telephoto lens is just 8-megapixel but you won’t be able to find a lot of faults there.

OnePlus has upgraded the selfie camera to a 32-megapixel unit from 16-megapixel last year. The details are decent but the images are not the sharpest in this segment. OnePlus does a good job of refraining from using excessive skin smoothening. OnePlus 10 Pro has entered the Indian market a little late compared to its primary competition for the year 2022. However, the decision to keep the OxygenOS alive may encourage long-term OnePlus users to make the jump to their latest and greatest. The 8GB RAM and 128GB storage variant has been priced at Rs 66,999 and the 12GB RAM, 256GB RAM variant has been priced at 71,999. This pricing brings it awfully close to the Samsung Galaxy S22 series. The iQoo 9 Pro is another device with a similar price tag and specifications. Realme GT 2 Pro will also be gunning for the same position. What works for OnePlus 10 Pro is the balance that the device strikes between performance, display, battery, and camera. It is not a hard choice to recommend.