OnePlus Nord 2 PacMan Edition review: It is all about the yellow blob

OnePlus Nord 2 PacMan Edition review: It is all about the yellow blob

OnePlus Nord 2 PacMan Edition flaunts a glowing arcade-game inspired rear panel, vibrant retro notification alert sounds, a themed animation, however, it carries the same hardware as the standard version, all that will charge Rs 3,000 extra which brings the question if it is worth spending a couple more bucks to get all same pieces. OnePlus Nord 2 had a blasting performance to the extent that it burnt a hole in some’s pocket but pun aside, the affordable phone from the Chinese company did make a strong case for the price. While the original Nord made a firm footing in the mid-range segment, courtesy of the premium features aligned with the sweet deal, OnePlus has bet big on the Nord series since then. Also Read - Vivo Pad with Snapdragon 870 SoC appears online, likely to debut next year

The OnePlus Nord 2 hit the Indian shores this July and five months down the line, the company has brought a special PacMan edition to charm the classic video-game fandom. The new edition adopts the same design as the original version, the only visible difference being the outer cosmetic change with some tweaks on the UI front. While the OnePlus Nord 2 was cited to bridge the gap between the premium and the budget price range under the OnePlus umbrella, the question arises as to whether the latest addition justifies the price tag. Here’s our OnePlus Nord 2 PacMan edition review. Also Read - OnePlus RT or 9RT: Which is the next OnePlus launching in India?

The special edition of the OnePlus Nord 2 has similar design aesthetics as the original model, from the rear camera housing to the tapered edges. The only visible difference you would find is the PacMan writing inscribed near the camera module, the neon glowing PacMan snacking on pellets and a reflective maze pattern that gets prominent under direct sunlight and the exciting bit is that it glows in the dark flashing the iconic maze. Much like the Nord 2, it features a glass back coated with Corning Gorilla Glass 5 with the curves joining the mid-metal frame (the standard variant has a plastic frame). The design is simply borrowed from the premium OnePlus 9 series, except its compact form factor offer good ergonomics and in-hand feel. The glossy back panel is a tad-bit slippery, but OnePlus has packed a PacMan-themed silicon case to keep these minor complaints at bay.

As with the tradition, OnePlus has integrated the alert slider on the right edge of the frame that basically allows you to switch between call profiles. The dual SIM tray sits at the bottom part to the left of the charging port.

Like I said, the special edition OnePlus Nord 2 is nothing different as its sibling with the plain cover internally. You get the same 90Hz display with HDR10+ compatibility. The AI-enabled features seen on the Nord 2- AI Colour Boost, and AI Resolution that takes advantage of MediaTek’s Picture AI quality tech make its way to the special edition as well. The features automatically boost the colours and brightness and minimize noise while playing content on YouTube, VLC, with the Resolution Boost working for Instagram as well.  As with most phones these days, the Nord 2 special edition gets a pre-applied screen protector. As for the viewing experience, the display offers vibrant colours and gets adequately bright in outdoor conditions. The 90Hz adds to the advantage of smooth animation and transitions. Even in the compact form factor, the company managed to put a spacious panel with a tiny punch-hole that thankfully doesn’t create a distraction while surfing content. But albeit the high refresh rate, 120Hz support would have made it a wholesome package if we are to compare it with other devices under a similar price bracket.

Since its entrée in the market, OnePlus has used Qualcomm chipsets on its flagship killers.’ The manufacturer changed the game with the Nord 2 swapping it with a MediaTek chip that heavily inclines on AI enhancers. The Dimensity 1200 flagship chipset delivers a balanced performance with day-to-day activities. In terms of gaming, I could get consistent frame rates throughout while throttling demanding games. During extended gaming hours I did observe mild heating near the camera module that might act as a boon keeping the hands warm during winter. Jokes aside, OnePlus has implemented Nord 2’s high-performance toggle mode that boosts graphics but at the cost of battery consumption. During the seven-day usage, I tried a couple of rounds with Call of Duty Mobile, the newly launched PUBG New State, and a few casual games- Samorost, Orbia. The phone manages to deliver good gaming performance with barely any stutter while rendering graphics, and the performance mode noticeably upticks the GPU performance. While the standard mode suffices for multitasking bit, the other mode can keep the gamers satisfied. In addition, the dual stereo speakers fire up ample sound clear enough to keep the traducers in the game off the coast (if the budget TWS are a cause of lag, you can rely on the speakers that deliver stereo effect). While the heavy titles could run without any stutter, it wasn’t the same case with the pre-installed PacMan 256-Endless Maze game. During the initial setup, I noticed lag while trying to save myself from the quartet but getting killed most of the time and struggled to add boosters to progress to the next level. But thankfully, the game could load without hiccups in the third trial.

OnePlus adopted Oppo’s heritage and applied the Oxygen-ColorOS blend on the OnePlus Nord 2 to secure itself on the software upgrade. While OxygenOS delivered a near-stock Android experience, the fresh change slides in a few features that are reflected on the camera and the settings. While the changes aren’t drastic, it’s a nice touch and an advantage for selfie lovers who opt for third-party apps to edit their portraits. Talking about the cream of the crop, the PacMan buzz that’s perhaps keeping the fandom excited, the classic video game characters are ubiquitous. From setting up the device, vibrant yellow-blue themed colour accents in the interface (even the Quick Settings), to charging animations. OnePlus has even added a dedicated PacMan launcher that adds arcade-style icons to the UI system. There are PacMan-themed wallpapers as well. The distinguished element on this special edition would have to be the maze-style in-display fingerprint reader with Inky, Blinky, Pinky and Clyde hovering for a brief second before unlocking the device. The fingerprint animation would appeal the iconic-game players if not the masses. Rest remains the same, from stock apps, default Google Phone dialer, to name a few. The software feels fluid and fast and with the ColorOS merge, it now promises convenient usability. However, one of the caveats with this integration is cutting down of Android to two years which otherwise is three for the premium slots. The Nord 2 got new camera hardware that allowed testing the sensors in questionable lighting conditions. As I mentioned earlier, the biggest change with ColorOS integration was with the camera software. If you are familiar with OxygenOS, you would find the slight change in settings placement with additions of Oppo’s Dual-Video mode and AI enhancement options. 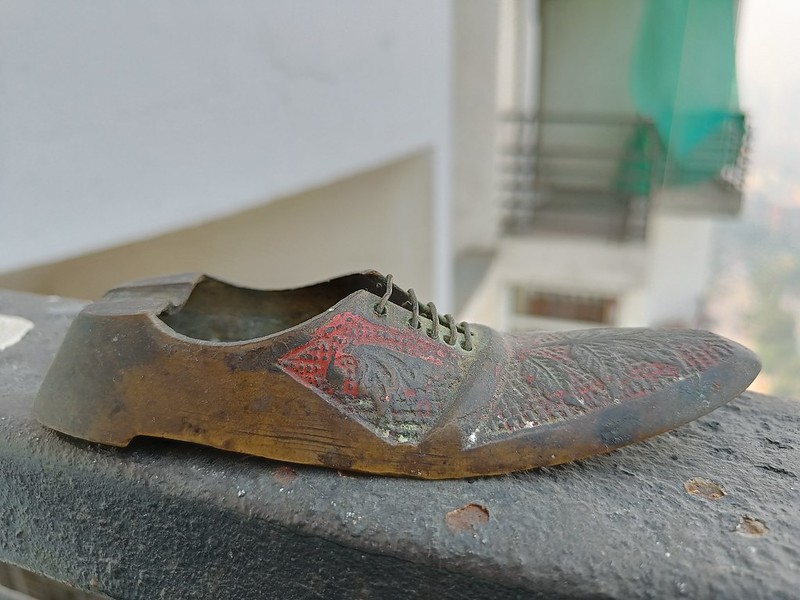 The triple-camera setup does a decent job in capturing shots in daylight. The primary camera carries most of the heavy lifting, rendering photos with good dynamic range and details in good and moderate lighting conditions. The AI and HDR, no doubt boost the colours to an extent that it appears oversaturated, but you get the option to turn these off and switch for the normal mode. The primary sensor is assisted by an ultra-wide and a monochrome camera.  The Portrait mode is good too, with foreground and background separation, although the difference in the hairline detail is visible during the night. As for low-light photography, the output is on par with the devices in this price range. Nightscape mode improves the shots minimizing noise level and bringing detail to the subject. Although, the images tend to soften mostly near the edges of the frame. Moving to the front fascia, the dual cameras have been replaced with a single 32-megapixel sensor. The single sensor manages to shoot up good selfies in bright light and the camera software gives you the option to choose between Pro Selfie and Beautify mode with the latter giving an anime effect to the selfies. Speaking on videos, you can capture 4K footage from the primary camera.

With a battery capacity of 4,500mAh, the phone easily lasts a day with normal usage. The high-performance mode gorb a good chunk of juice but the super-fast charging support saves it from that agony. The 65W Warp Charge is insanely fast and it pumps up the battery from 0 to 100 percent in almost half an hour. Should you shell out that extra bit to snack out the PacMan-themed Nord 2?

OnePlus is no doubt playing on the nostalgic factor, and it would rightly appeal to those who enjoyed pushing the hungry yellow blob in the classic blue maze.  The PacMan presence could be felt in almost every corner, from the interface, those minute animations, to ringtone. Added with this you get a compact form factor that benefits one-hand usability, the flagship mobile platform that promises a balanced performance, and the decent battery backup with a super-fast charging solution. But while these add up to the excitement, most of you would still want to avoid the elephant in the room, the Galaxy Note 7-like debacle. Although a few users complained about the OnePlus Nord 2 5G explosion which is quite concerning it still remains a mystery as to whether the user is at fault, or the device has internal issues. While OnePlus points out external factors for the incident, we would still advise being cautious.  Talking about the price, the Nord 2 PacMan edition comes for Rs 37,999 for the sole 12GB/256GB variant. If you compare with the standard variant, the special edition tags an extra Rs 3,000 bucks which makes little sense given the handset is identical inside out. However, if you want to flaunt a device that doesn’t have the mundane look as other devices you can opt for this glittery phone that’s all about PacMan. But we would still recommend getting the standard variant, given you can easily a custom-made mobile cover for a lot cheaper price (in case you are fine passing over that vibrant blue & yellow UI colour scheme.)