Oppo's 10x lossless zoom is a technology that promises to take you closer to your subject but the user interface needs significant work. Smartphones have successfully replaced point and shoots as the most personal camera for consumers. In the case of some, their smartphone becomes their first gateway to experience photography. While their importance and significance cannot be debated, smartphones have always struggled with one form of photography: zoom. Chinese smartphone maker Oppo believes that it has solved the problem with its 10x lossless zoom feature, scheduled to arrive on a working device during the second quarter of 2019. This is, however, not the first time that the company has taken on the challenge of improving zoom technology on smartphone cameras. Also Read - OnePlus phones in future will continue to run OxygenOS despite merger with Oppo: Report

In 2017, Oppo showed 5x lossless zoom at MWC but the feature never made it to a functional smartphone. This year, the company is bringing the 10x lossless zoom to a real smartphone and it aims to make that possible with a triple camera solution. Huawei, the third largest smartphone maker has already achieved 5x lossless zoom with its Mate 20 Pro, which has a focal length ranging from 16mm to 80mm. Oppo, on the other hand, demonstrated its 10x lossless zoom where the minimum focal length is equivalent to 15.9mm and the maximum focal length is 159mm. I got to play with a prototype device at Oppo Innovation Event 2019 in Barcelona on February 23 and it was immediately clear that the technology is promising but struggles at the same time. Also Read - Best wearable gift ideas under Rs 5,000 for Father's Day 2021

The first smartphone from Oppo with the 10x lossless zoom will feature three cameras on its back, one ultra wide-angle sensor with an equivalent focal length of 15.9mm and a main camera, which Oppo calls as Ultra Clear camera, having a focal length of 24mm. The third camera is the telephoto lens and it is basically a prism that relies on periscope mechanism first showcased in 2017. At this moment, Oppo is not sharing the exact resolution of the ultra wide-angle and telephoto cameras but it does confirm that the main camera is of 48-megapixels. The gist of the setup is that the ultra wide-angle camera will work for shorter focal length and thus capture a large amount of the scene. The main camera will produce the details with the help of its high-resolution sensor while the telephoto lens will fill the gap by allowing users to zoom 10 times into the subject.

Chuck Wang, Product Manager of Oppo, clarified that all the three sensors work simultaneously for a seamless experience. An Oppo executive in the camera department added that there is a total of only two switchovers involved when consumers try zooming in from the ultra wide-angle view to 10x lossless zoom. In other words, the standard 48-megapixel camera with 24mm focal length is responsible for a lossless zoom of 1.7x while the telephoto takes over from there to reach 10x zoom. During the time using the prototype device, it was clear that user experience is still not ready and the camera UX, which is basically a slider for zooming into pictures, is crude. However, the switchover seemed rather instantaneous despite the fact that it was a prototype device. 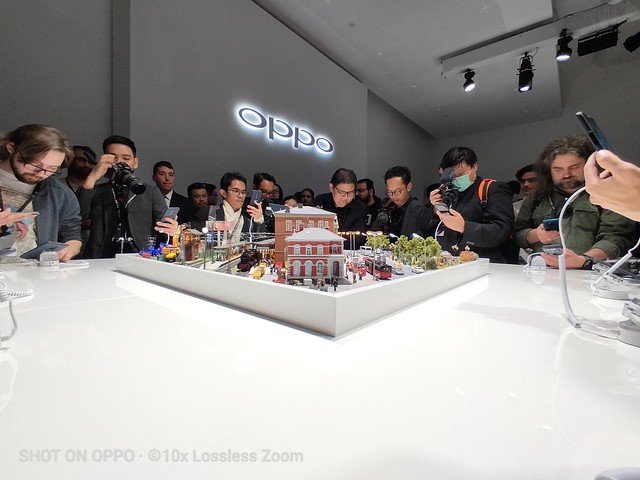 Before I speak more about camera, I want to mention that Oppo should take a page from Huawei and introduce a zoom function similar to its Chinese counterpart. The ideal experience would be one where you tap the zoom button and it goes 5x and you tap again, it goes 10x zoom. For now, you need to rely on the slider mechanism, which is far from intuitive. In my limited time testing this prototype with 10x lossless zoom, I could understand the main camera is doing most of the heavy lifting while ultra wide-angle and telephoto cameras play their individual roles in select areas. With that context, I can say that the pictures shot with the main sensor or the ultra wide-angle sensor seemed good with good preservation of details and balanced lighting overall. Most of the time during testing the camera, I found struggling to reach a point from where the minimum distance condition got fulfilled and the camera snapped a 10x lossless zoom image. This is an area that needs to be ironed out before Oppo can really promote it as a replacement for zoom camera. While MWC 2019 started as place for 5G and foldable smartphones, there are companies like Oppo and Nokia fixing real-world issue: improving smartphone photography. Honestly, Oppo fixed the problem with smartphone zoom but the tech is so raw right now that it is far from usable.

Disclaimer: The author attended Oppo s Innovation Event in Barcelona at the invite of Oppo Mobiles India, which provided flight and accommodation.