Realme 5 Pro is literally a leap over Realme 3 Pro in terms of camera performance. It is another proof that cheap smartphones have gotten really better. However, its real opponent is Realme itself. Read our review to find out why. There are smartphone makers and then there is Realme. After growing 848 percent during the past year, it seems to be driving a F1 car and pulling as many Gs as possible. Look at its performance in the past six months. On March 4, 2019, Realme launched the Realme 3 as the successor to Realme 2 in India. It followed with the launch of Realme C2 and Realme 3 Pro on April 22, 2019. One would expect the company to take a break but not Realme. Also Read - Realme 5, Realme 5 Pro to be available offline next month, bootloader unlocking also coming: Sheth

It then launched its first smartphone in China. Brought the Realme X and Realme 3i to India on July 15, 2019. Just over a month later, the company launched Realme 5 and Realme 5 Pro. Last week, it rushed to announce the Realme XT with 64-megapixel main camera. To those keeping count, it launched a total of 8 smartphones in a span of six months. That s more than a smartphone a month. When I look at this timeline, it baffles me as a tech writer. For a consumer, it is mainly a confusion. The big question before was which phone should I buy? Now the question is when should I buy one? Also Read - Motorola One Action vs Realme 5 Pro vs HTC Wildfire X: Price in India, specifications and features compared Not aiding this confusion is the global trend where smartphone users are holding onto their devices for a longer period of time. But Indian smartphone market seems to be near a point where you can switch to a new phone almost every month. So, if you bought a Realme 3 Pro in April, I feel sorry for you. Reason: The Realme 5 Pro costs the same and seems much improved on the camera part. With Realme 5 Pro, Realme is promoting leap to quad cameras. After using the device for two weeks, I think Realme is right to some extent. Here is why? In my first impressions of Realme 5 Pro, I called design as the North Star of this company. That remains true but the focus has been entirely on cameras with its newest smartphone. Both Realme 5 and Realme 5 Pro come fitted with four camera sensors on their back. Going by math alone, four is bigger than three or two but that does not necessarily mean better. These new devices from Realme just prove that many cameras don t bring many kinds of experience.

If you look at the large swath of smartphones then cameras are done in two ways. One is Pixel way where you put only one essential camera and rely entirely on software. Second is to use additional cameras and then rely on software to get the best result. If you observe the common ground is software. With Realme 5 Pro, the company has focused essentially on that element. 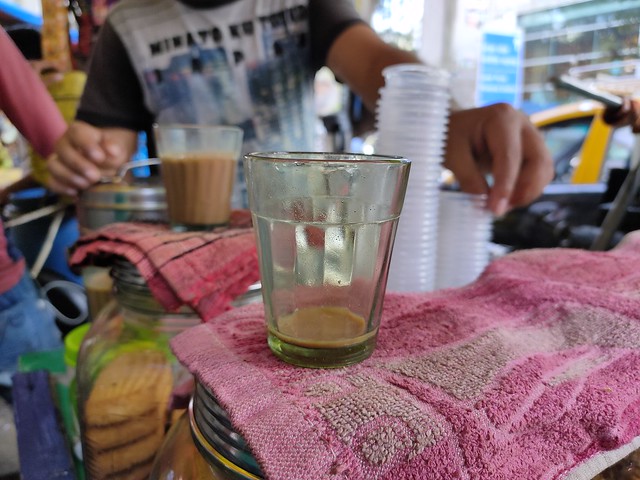 In broad daylight conditions, which are hard to come by in Mumbai now, the sensor records decent dynamic range. The larger resolution allows for the sensor to record more details. While the dynamic range is not the widest, the 48-megapixel shots capture lot of details and allow room to crop as well. But Realme 5 Pro really impresses in low light photography. It is like the sensor lunging forward to capture all the available light.

When you engage Nightscape mode, the camera not only takes longer exposure. It does so in a way that the image does not look like a painting. It tends to add a bit of purple texture to the sky but overall, it makes for a perfect Instagram shot. The big difference can be seen with the fact that there is much less noise compared to its predecessor. It is a huge feat to achieve with a smartphone camera. With Realme 5 Pro, I realized that you don’t need a super expensive smartphone to capture great low light imagery. Realme got the goods in the form of IMX 586 and it made the most out of it, for sure.

The second area where Realme 5 Pro’s camera shines is in portrait mode. It excels at edge detection since it uses the main sensor and not telephoto. If you position yourself well then you get images that are fit to print. In fact, I have clicked pictures with two people in the subject as opposed to just one. That s impressive. What’s not impressive is the dedicated macro and ultrawide angle cameras. The macro did not seem right most of the time and the software does not help either. I could never understand when it was too close or too far from the subject. The 8-megapixel ultrawide is fine but I have seen better results with other devices.

Realme should immediately focus on optimizing those two sensors for versatility in mobile photography. There is also a 16-megapixel selfie camera placed inside a waterdrop style notch. It works reliably well and does portrait mode too. The limited number of selfies that I clicked for this test seemed par for the course. Though I do think Xiaomi Redmi Y3 kills with its 32-megapixel selfie shooter in this price segment. To conclude, Realme 5 Pro is indeed a leap in mobile photography but it is not the one most consumers want at this point. Realme 5 Pro, according to the company, comes with a crystal design, a step up from diamond cut design. It is still plastic back with nice texture to it that reflects light beautifully. Our review unit in crystal green color is subdued when compared to its crystal blue sibling. The design has led to this debate over whether glass is better over plastic. Trust me, none of it matters. As soon as you buy these devices, you are going to slap a case on them. After that all that feel of metal and plastic fades and you are stuck with silicone case. Realme includes one in the box but it’s such a tight fit that it seems totally out of place in Realme’s packaging.

In terms of design, the curved back leads to a leading line that surrounds the entire device. On the bottom, there is a 3.5mm audio jack, microphone, USB Type-C port and an average sounding speaker aligned in a straight line. The top is home to another microphone. The power button is on the right while left is home to volume rocker and SIM card tray. It supports two SIM cards and a microSD card at the same time. On the back, there is a quad rear camera setup on the top left edge. The 48-megapixel sensor is neatly highlighted with two yellow rings. There is a fingerprint sensor on the back and Realme logo etched vertically. The front is home to a 6.3-inch LCD display outputting a resolution of 2340 x 1080 pixels. It seems as bright as the one seen on Realme 3 Pro and compares well to other competitors. If you watch a lot of content then you might prefer the HD+ AMOLED panel on Mi A3. Otherwise this display is good enough for consuming video content and playing games. It is bright enough to use under sunlight and can lower the brightness to a level that works in night conditions. It supports Night Shield, which turns the screen warm at night but lacks ambient display. The one thing I wanted to see with Realme 5 Pro is meaningful bump in performance. However, we will have to wait another generation of devices to get it. Under the hood, there is a 10nm Qualcomm Snapdragon 712 SoC, which has higher clock frequency than Snapdragon 710. Since it uses the same Adreno 616 GPU, the graphics performance is identical to its predecessor. I could play PUBG Mobile at high settings and had absolutely no issues with Asphalt 9: Legends as well. However, you will end up lowering the graphics settings, if you want to game for a longer duration of time. At high graphics setting, I observed that Realme 5 Pro got warm after a point.

I prefer not to push my luck and played at medium setting. It is now evident that Qualcomm Adreno has a significant lead over Mali in graphics performance. If you are someone who is not into gaming then this device has all the performance you need. Our review unit also comes with 8GB RAM and 128GB storage so memory was never an issue. With ColorOS 6, the apps load faster and multitasking is not an issue either. However, if you open Google Docs file with several hundreds of pages then scrolling stalls a bit. The inclusion of app drawer is welcome and ColorOS 6 has reasonable amount of customization. It packs a 4,035mAh battery which is the new normal in this sub-Rs 15,000 price segment. I consistently averaged over five hours screen on time with the device. This is with at least one hour of gaming, another hour of streaming, Slack pushing messages during working hours, music streaming during commute and an activity tracker app always running in the background. For most people, the Realme 5 Pro could stretch for a day and a half without needing to be charged. Realme has also added support for VOOC 3.0 which adds 50 percent charge in around 30 minutes. The connectivity options like WiFi, Bluetooth and 4G LTE all work reliably well. Realme 5 Pro shows that this company has got what it takes to build a reliable smartphone camera on budget. That has been the intent from start and Realme has delivered. However, when I look at the fact that Realme 3 Pro launched just three months back, I think this progress has come too soon. It covers all the basics fairly well. The design is on point, the camera is impressive, performance is competitive and battery life is great. At a starting price of Rs 13,999, it covers other basics like fast fingerprint sensor and reliable 4G coverage as well. However, I am not going to recommend this phone to anyone right now.

For one, I can’t guarantee that Realme won’t launch Realme 6 Pro next month. It is quite evident from the timeline this review emphasizes at the start. Secondly, there is Realme XT with 64-megapixel camera already announced. If that camera ends up being better then it will negate all the progress made by Realme 5 Pro. Realme’s opponent is not Samsung or Xiaomi but its own quest to launch a number of smartphones at once. So, we circle back to the real question: when should I buy a new smartphone? The answer is not now if you already have a smartphone. If you don’t have one then you can take a plunge with Realme’s latest offering.