The Realme 6 is a decent mid-range smartphone with some unexpected flagship features. Check out our review and find out if the phone is as good as it looks on paper. Realme’s 5 series was one of its major steps towards the mid-range segment. Priced very competitively, the Realme 5 and 5 Pro went on to blur the lines between budget and mid-range devices. But what we did not expect was a sequel that skipped mid-range and aimed at a more premium segment. Enter the Realme 6 series. Also Read - Realme 6 is the new Pro, company says in a tweet hinting at possible price hike

Comprising of the Realme 6 and a higher-end 6 Pro, the phones boast some astonishing numbers. This includes elements like a 64-megapixel camera, 30W fast-charging, and a screen that refreshes at 90Hz. While the prices also comparatively went up for both devices, the element of value-for-money climbs higher, or does it? We tried to decode this in our review of the Realme 6, and here are our thoughts. Also Read - Realme 6 Series launch event canceled due to Coronavirus

The Realme 6 features a 6.5-inch LCD screen with thin bezels on the sides. There is a single punch-hole camera on the top left. The power button remains on the left edge of the phone, while the volume rockers are shifted to the right, along with the SIM tray. The bottom edge features a 3.5mm headphone jack, microphone, USB Type-C port, and the speaker grille. However, note that despite the large earpiece above the screen, there are no stereo speakers on the Realme 6. Also Read - Realme 6 series smartphones to be both online and offline On the back is the quad-camera set up in vertical alignment along with a flash. The back features a gradient finish from top to bottom on the comet blue variant we have and looks quite minimal yet premium. The build quality of the phone also feels great and the in-hand feel is nothing like a budget phone. The body and the buttons all feel sturdy. The 6.5-inch LCD screen features an FHD+ resolution at a 20:9 aspect ratio. This translates to a 405ppi screen with a screen-to-body ratio of 90.5 percent. The colors and peak brightness of this LCD screen are good, but nothing extraordinary. However, the 90Hz refresh rate and 120Hz touch sampling have put this device ahead of the competition. Enabling 90Hz gives you fluid transitions throughout the UI. However, games are yet to be optimized for the feature and most of them will max out at 30 or 60fps. While the fluid aesthetic appeal is there, it is not as prominent or pleasing as observed on 90Hz AMOLED screens. However, the most affordable AMOLED screen with 90Hz is still much more expensive than the Realme 6. So, this is the best you get at the price. The screen also comes with some sort of protective layer already installed on top. The phone runs Android 10 out-of-the-box with Realme UI 1.0 on top. While still not perfect, Realme UI is pretty neat, considering it is the brand’s first iteration of its own skin. The skin does come with a little bloatware, most of which you can get rid of, and customized ads, that you can disable from the settings. However, these are compensated by a neat UI with useful features scattered through the interface.

We did observe small issues with the UI and its optimization. Swiping down on the home screen puts the notification bar clock too close to the punch-hole. Downloading apps from the play store displays a notification but no progress bar. These, however, can be easily ironed out with a quick update. While not close to stock, the UI doesn’t make the phone feel heavy in day-to-day usage.

The Realme 6 features a quad-camera setup on the back. This comprises a 64-megapixel main lens along with an 8-megapixel ultra-wide and two 2-megapixel lenses for macro and monochrome portraits. Pictures through the Realme 6’s main camera were pretty good. We observed that the image processing did a good job at adding punchy-ness to the colors, but not overdoing it like some other phones we have seen. However, these were regular 16-megapixel photos produced through pixel-binning. To take 64-megapixel shots, you will have to go to a dedicated pane. The ‘64MP’ mode produced similar pictures but missed out on the HDR switch. Shots were good, and provided a lot more detail as expected. The lens, however, shines more during low light scenarios where the binned 16-megapixel images can capture a lot more light. While the dedicated night mode helps, we made the most of the lens manually via the expert mode. Check out all our samples by clicking on the picture below. 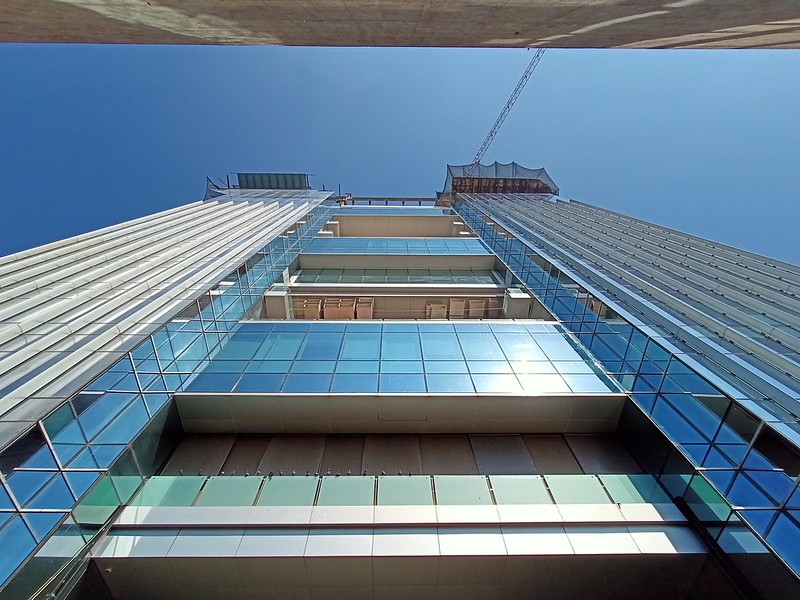 The ultra-wide sensor captures an 119-degree FOV and images look great. There is still the loss of detail that comes with every 8-megapixel ultrawide lens. However, warping on the edges is taken care of decently through software. The macro lens didn’t really excel at what it was supposed to do and while we could take closer shots of smaller subjects, the detailing of the images left us wanting for more. The new black and white monochrome lens helps take great monochrome portraits. This lens helps the main sensor grab a wider spectrum of greys, hence adding more richness and texture to portrait shots.

The Realme 6 comes with a MediaTek Helio G90T chipset under the hood. If that sounds familiar, that is the same chip used on the Xiaomi Redmi Note 8 Pro. The chipset, coupled with 8GB LPDDR4X RAM, translates to super snappy performance. Day to day tasks handle like a breeze on this phone. The large RAM reserves also mean you can leave many apps running in the background without worrying about them refreshing when you open them later. However, we can’t say the same about the performance of the 4GB and 6GB variants. Realme’s UI optimizations also help with RAM management, along with elements like battery life and more. Cellular reception was good on the smartphone and so was the call quality, despite the lack of a secondary noise cancellation microphone. The fingerprint sensor on the power button was quite fast and accurate. The power button approach, however, will take some to get used to for users accustomed to rear-mounted or in-display scanners. Once used to it, we found its positioning to fall much more natural compared to rear-mounted sensors.

With the MediaTek Helio G90T, we were excited to try out gaming on the Realme 6. The phone breezes through small and medium-level graphic-intensive games. On PUBG, we could play at high frame rates at up to HDR graphics and keeping graphics on smooth even unlocked the extreme frame-rate option. Gaming remained smooth and though the phone got warm after extended gaming, the performance was not really affected.

Another major pillar of the Realme 6 is its battery life. The 4,300mah battery on the device is just average, considering phones in this segment are starting to offer up to 6,000mAh batteries. However, it is the flagship level 30W fast charging that takes the prize here. For some context, the 30W fast charging is the same speed used on the OnePlus 7 Pro. Couple that speed with the 4,300mAh battery and you have a phone that can not only last a full working day but can also be juiced up pretty fast. The Realme 6 can manage a full charge in slightly less than an hour. Further, we put the phone on charge at 10 percent and managed to get 75 percent battery in 30 minutes. This makes up for the average battery and gives you a device that can charge much faster than any phone in the segment.

The Realme 6 is a great device in its segment. At a starting price of Rs 12,999, it competes directly with Samsung’s M series and Xiaomi’s Redmi Note series. Rather than engaging the competition with a better implementation of the same features, Realme brings completely new numbers to the game. The end product is not the perfect device, but a big step in the direction the company is heading towards with this series. With the addition of 30W fast charging, a 64-megapixel, and a 90Hz screen, Realme leaves the ball in Xiaomi’s court for the next Redmi Note. For now, it is one of the best smartphones money can buy in this segment.