The Realme C11 price in India starts from Rs 7,499 and will go on sale via Flipkart on July 22. Read our Realme C11 review to know more about its value and performance. In merely two years, Realme has successfully carved its name in the budget smartphone space. The company has launched a bunch of good phones under Rs 15,000 in India and has even spread its wings in other categories. Realme has left no stone unturned and covered up almost every price point in the budget segment. Due to the hike in the GST rates, the prices of the devices have been increased. The Realme C3, which was launched for Rs 6,999 in India, is now available for Rs 8,999. At the moment, the company doesn’t have any latest phone under Rs 8,000, which is the core reason behind the existence of Realme C11. Also Read - Phones launched last week: Realme GT Neo 2, Moto E40, OnePlus 9RT, and more

While the device offers some good features of the Realme Narzo 10A and Realme C3, it does disappoint in a few things. But we cannot blame the brand completely as the GST rate hike has changed things and going forward, phones might not be as cheap and feature-rich as earlier. But this isn’t going to be the scenario forever and the prices are expected to go down in the future. In order to balance the cost, the company seems to have gone in favor of things that might please Indian consumers and toned down those features which are less desirable. Well, let’s see whether the brand has made the right product, while also trying to keep the price competitive. The Realme C11 price in India starts from Rs 7,499 and will go on sale via Flipkart on July 22. Read our Realme C11 review to know more. Also Read - Flipkart Big Diwali Sale begins today: Best deals on smartphones, smart TVs, home appliances

As I mentioned in our first impressions, Realme has always focused on launching phones with trending, and attractive design, especially the back panel. The Realme C11 is no different and offers you the waterdrop notch display design. While this is in the current fashion, it is a bit hard to differentiate it in a bucket full of waterdrop notch phones. Thankfully, Realme has changed the rear panel design. There is no pill-shaped camera module and you get a square bump placed in the upper left corner of the phone. This actually looks good and refreshing as the budget phone makers are applying the same design blueprint on every new release. Also Read - Top 5 OnePlus 9RT alternatives: OnePlus Nord 2 5G, Samsung Galaxy A52s 5G, more This time around, Realme hasn’t opted for bold shades, and instead, you get subtle color options. These are Rich Green and Rich Grey color options. Both of them look decent, and the reason why I’m not saying attractive is we are used to seeing eye-catching blue, black, and red colors. However, every user has a different taste and those might appease them. We won’t be surprised if the company launches a new blue or red color variant in the coming weeks.

The device is not slippery due to its textured finish, offering a better grip. We like Realme’s anti-fingerprint texture that even the Realme C3 has. Unfortunately, the company hasn’t included a plastic case in the retail box, which we have seen with most of the Realme phones. There is also a strip coming down the square-shape camera module, which adds a bit of charm to the otherwise understated look. The disappointing part is there is no fingerprint sensor for biometric authentication, and this seems to be one of the ways to balance the cost. The Realme C11 buyers will have to settle down with the face unlock feature, which is quite quick to unlock the screen but not secure. You get a micro-USB port, instead of a modern USB Type-C port found on Redmi phones. Realme has given two slots for nano-SIMs and one for a microSD card, which is nice.

There are no surprises when it comes to display. The Realme C11 comes with a 6.5-inch HD+ panel. The brand has offered the same screen with several phones in the past. At its price point, it offers a decent display with enough brightness, sharpness, and vivid colors. There is no support for Widevine L1, meaning it won’t be able to play content on streaming services like Amazon and Netflix in full resolution.

While the Realme C11 is not a successor to the Realme C3, the old C series handset at least offered a good MediaTek G70 chip for Rs 6,999. Realme has opted for a low-end MediaTek Helio G35 processor to keep the price low. It is not as powerful as Helio G70 SoC, but can handle basic tasks. However, from the beginning, it felt quite sluggish, and apps took a good time to load while some launched in a few seconds. The smartphone cannot handle heavy multitasking between apps with ease. Realme should at least have offered 3GB RAM. These days people use a lot of apps and 2GB is not sufficient for aggressive RAM management. The scenario has changed. There used to be a time when phones offered very average performance and 1GB/2GB RAM option, but when you start witnessing 4GB RAM or at least 3GB at a budget price, you are spoiled. The Realme C11 is for those who have plans to switch from feature phone to a smartphone. Those who just desire a smartphone with a long-lasting battery, a big screen for binge-watching, and other basic necessities, the Realme C11 is for them. As far as gaming is concerned, do not expect the MediaTek Helio G35 gaming chip to perform very well in performance-intensive titles like PUBG Mobile or Call of Duty. These games are playable, but the experience is not that great. Users can definitely play casual games like Subway Surfers without any issues. We even noticed that with overall aggressive usage, the device’s back panel gets hotter quite fast. The Realme C11 ships with the latest Android 10 OS out of the box. The company has never offered an old Android version and you will always see the latest one on Realme phones. The user interface is the same as on the other phones from the company. There is less bloatware, but the brand could have ignored apps like Realme Paysa, Realme Link, Realme Store, YouTube Music, and others.

While you can expand the internal storage by up to 256GB using a microSD card, it is always better to not have many pre-installed apps unnecessary filling up the storage space. It ships with 32GB storage and we checked in the settings, you get close to 20GB because of pre-installed apps. We noticed that the handset has one of the banned Chinese apps. But you can uninstall the Helo app manually by heading to App info. The company has even confirmed that it will release an update, which will automatically remove these types of apps. The Realme C series still offers you a dual rear camera setup, which is fine. It consists of a 13-megapixel primary sensor with an f/2.2 lens and a 2-megapixel f/2.4 secondary sensor for portrait shots. On the front, there is a 5-megapixel camera sensor with an f/2.4 aperture. This entry-level phone comes with slow-mo and time-lapse modes, apart from HDR and Portrait modes. Realme has even added a dedicated nightscape mode, which the company claims can offer the best shots in the segment.

At its price point, the Realme C11 can produce some good shots. In daylight, the camera offers detailed and sharp photos with good image processing. The exposure is handled well most of the time. Under direct sunlight, the colors are a bit boosted and details aren’t sharp. If you want vivid colors, the HDR mode works well, but it is better to ignore the Chroma boost feature. The camera can sometimes capture very saturated images, making them look artificial. You can check out the camera album below. 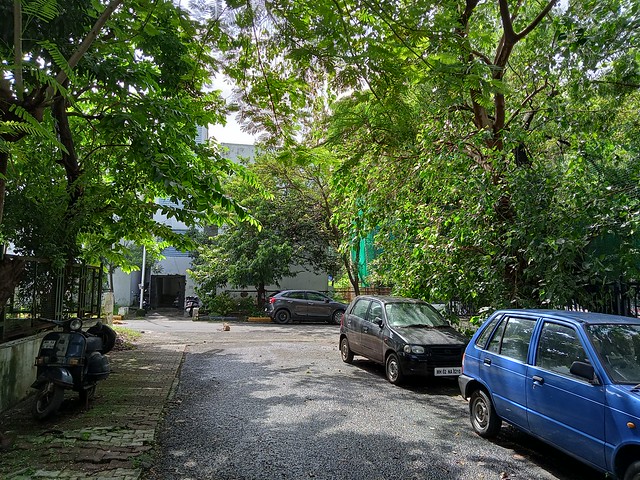 The selfies captured by the 5-megapixel front camera are above average. The skin tones are not that natural, and details are lost, which you will witness more if you zoom in. The camera produces soft selfies, but you will get better results in good lighting scenarios. There is an optional beautification filter, which just makes the selfie look worse. In fact, the portrait shots taken with Realme C11 were well captured. The bokeh effect is on point, and the colors, details, sharpness, and exposure are handled very well. You can adjust the intensity of the bokeh effect while capturing an image, which is a nice feature. The non-human subjects had a decent level of background blur, above-average dynamic range, and details. We liked the detailed and natural close-up shot.

The night shots have a lot of noise, but the nightscape mode retains the colors and details better than the regular photo mode. This mode takes about four seconds to take multiple shots of the same scene to offer brighter and more clarity. The focus was locked moderately, and you might sometimes be required to tap on the viewfinder for better focus.

The Realme C11 features a 5,000mAh battery, and the handset delivered us less than two days of battery life. If your usage involves just basic messaging, calling, random videos on YouTube, and social networking, you don’t need to worry about the battery draining out in a day. However, adding gaming, hours of binge-watching, long photography sessions, and browsing will give less than a day’s battery life. Once the battery is down, the 10W charger takes quite a lot of time to fully charge the Realme C11. In our usage, it took more than 2 hours.

Realme C11 review: Should you buy it?

Currently, there isn’t any good option under Rs 8,000 as the GST rate hike has increased the prices of smartphones in India. If your budget is restricted to Rs 8,000 price segment, then you can consider Realme C11. It is important to note that you will not be very pleased by the general performance and the fact that it lacks a fingerprint sensor. You do get decent cameras, design, and great battery life. But, buying Realme Narzo 10A would be a wiser option and for this, you will have to spend Rs 1,500 more. For Rs 8,999, this device packs a better performing processor, 3GB RAM, fingerprint sensor, and more. If Xiaomi launches its budget Redmi 9 series in India with better features for the same price, it will change the game.