Realme C3 Review: A good mix of value and features

Realme C3 price in India starts from Rs 6,999 and the device will go on sale on February 14 via Flipkart. If you are interested in buying the Realme C3, then read our review.

2020 will be an interesting year as smartphone OEMs will be racing to outdo one another by offering high-end features at aggressive prices. Xiaomi and Realme are brands that are gradually climbing up the value chain. The companies intend to change the landscape of high-end performance, value-priced devices. Just yesterday, Realme launched its new entry-level phone in the market, which is a good upgrade over Realme C2. Also Read - Realme C3 launch, Vodafone RED, WhatsApp Dark Mode and more: Daily News Wrap

With Realme C3, the company is setting a new benchmark in terms of performance at a budget. The Realme C3 offers a new MediaTek Helio G70 chip at a low price point. This is a huge upgrade over the MediaTek P22 SoC. It offers a slightly watered-down experience in comparison to the Helio G90 chip. You now also get a bigger 5,000mAh battery, and a 6.5-inch display. The company has smartly priced the C3 to target both Xiaomi Redmi 8 and Redmi 8A phones. In our review, we’re focusing on the Realme C3, and we will talk about whether it is worth your wallet. Also Read - Realme C3 launched in India: Price, sale date, offers, features, and more

The new phone looks exactly like the Realme 5i. The company has swapped the signature diamond-cut design with the new Sunrise design, which looks equally elegant. The rear panel retains the usual dual-camera setup, albeit gets a different primary sensor this time. In case you are wondering, there is still no fingerprint sensor and you only get the face unlock option. The panel is built out of plastic, and the textured finish adds additional grip. This anti-fingerprint surface doesn’t gather dust or smudges which is hard to clean off on a few phones. However, the phone tends to slide around when kept on a flat hard surface. Also Read - Realme 6 Pro spotted at IMDA certification website As this is an entry-level phone, the Realme C3 features decent bezels all around with the bottom one being slightly thick as one would expect. It is worth noting that Infinix will soon launch a phone with a pop-up camera under the Rs 10,000 price segment. This means that budget-friendly users will soon be able to experience a full-screen notch-less display at a very low price. Sounds crazy right? Nevertheless, the C3 offers a small notch peeking on top of the panel, and it is not as obtrusive as some other implementations. The fact that the phone offers a whopping 6.5-inch display will surely entice a lot of customers. But, the 270-pixel density seems to be quite low for 2020. The panel operates at HD+ resolution, which can be excused keeping its entry-level price tag in mind. Its panel also has Corning Gorilla Glass 3 for protection. The brightness levels aren’t satisfactory under harsh sunlight. Viewing content on the device under harsh could be slightly bothersome. In the display settings, you only get a slider to choose either cool or warm temperatures. Besides, you will still find a micro-USB port and a loudspeaker at the bottom. Realme says its C3 is splash-resistant, but not water-resistant. This time around, you don’t get a MediaTek Helio P22 processor found on a lot of entry-level and budget phones. The C3 packs a MediaTek Helio G70 chipset, which is designed to enhance the gaming experience for low-budget devices. This is the best phone in its segment when it comes to performance. We even played PUBG Mobile, and the phone defaulted to High preset with graphics set to HD and frame rate set to ‘High.’ It was playable at these settings, albeit you will get a slightly better and smoother experience at Medium settings. The device, however, did get slightly warm after a long match.

The general performance of the Realme C3 is good, and we didn’t witness any issue even while multitasking. The handset is being made available with 3GB RAM and 32GB storage. Battery life is one of the strongest points of the phone. Its 5,000mAh battery can easily give you more than a day’s battery life. With light gaming, social networking, a few photography sessions and productivity apps, the device lasted a day and a half. Realme C3 is the company’s first phone to ship custom Realme UI out-of-the-box. It is basically a skin on top of ColorOS 7, and we liked it as it offers a fresh look, better interface design and a few new features, including the Focus mode. There is a Dual Music mode, which lets users listen to a song both wireless and via wired earphones simultaneously. We didn’t witness much of a lag or latency during our usage. One will also find a performance mode, and its default setting sometimes feels like it restricts the performance.

It is impressive to see that the device ships with the latest Android 10 OS, which is not usually the case in this segment. You get all the latest Android 10 features like smart reply and more. There is native dark mode, which one can activate via the quick settings panel. The dark mode is really good and is not just a shade of grey. You also get improved location and privacy controls, Digital Wellbeing and more.

The device features two cameras at the back, including a 12-megapixel main sensor with f/1.8 aperture and 1.25μm ultra-large single-pixel area. There is also a 2-megapixel secondary camera with f/2.4 aperture. The phone’s camera supports features like HDR, Nightscape, Slo-mo, Portrait mode, and more. On the front, there is a 5-megapixel AI front camera. 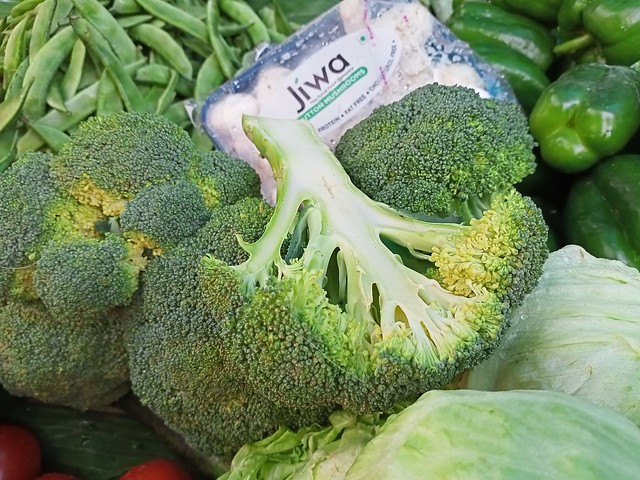 In daylight, the images are quite detailed with sufficient sharpness, considering its price point. However, the shots taken by Chroma Boost is not as detailed as the HDR mode offers. That said, you can get some decent shots with the combination of Chroma Boost and HDR mode. With both the modes on, users need to be steady for a few seconds to get a decent shot, or else you might get some blurry photos. You can also click images separately at 1x, 2x and 4x zoom, but don’t expect to get a quality shot. Macros turned out better than we expected at its price point. The macros look detailed enough when we zoomed in.

The C3’s regular photo mode tries its best to capture bright low-light shots, but the nightscape mode does a better job, and colors were also relatively well preserved. You can get some usable shots with HDR mode. The images have minimal details with a slight haze when seen full-size on a monitor. Selfies turn out to be above average in good lighting conditions, and noise tends to creep in during indoor shots. Realme C3 review: Should you buy it?

Considering the price, Realme C3 is one of the best phones in the market that you can spend your money on. It focuses on overall value rather than a particular feature. For Rs 6,999, it offers a strong battery life as well as a large screen, which will surely attract eyeballs. Unlike the Infinix Hot 8, you get a powerful enough MediaTek Helio G70 processor, which will not disappoint you in terms of performance. Apart from these, you also get decent cameras as well as a captivating design. What else, the handset also ships with the latest Android 10 OS and the UI doesn’t have a lot of bloatware.

The C3 is an easy phone to recommend, but it will be interesting to see what Xiaomi Redmi 9A will bring to the table to beat the competition. The Redmi 9A will launch in India on February 11, and one never knows what Xiaomi might have planned to woo the wallet-conscious consumers. Besides, in the same price range, there is also the Infinix Hot 8 phone, which offers you 4GB RAM + 64GB storage variant.