Before you pull the trigger on the purchase of Narzo 10, you likely have a lot of questions regarding the smartphone. These possibly include queries regarding battery backup, gaming performance, and more. Here is my Realme Narzo 10 review with all the answers. Taking a look at the specifications, the budget gaming smartphone features a massive 5,000mAh battery along with 128GB storage. The company has also added a dedicated microSD card slot to support expandable storage. Buyers will get the chance to purchase the Narzo 10 in two color options including “That White” and “That Green”. However, before you pull the trigger on the purchase, you likely have a lot of questions regarding the smartphone. These could possibly include queries regarding battery backup, gaming performance, and more. Here is my Realme Narzo 10 review with all the answers. Also Read - Realme C3, Realme C2 price changed in India: Here's everything you need to know

Design and build quality on Narzo 10

First up, let’s talk about one of the most noticeable aspects of any smartphone, the design. Unlike the budget smartphones from 2018 or even 2019, smartphone companies are stepping the design game. The Narzo 10 features a somewhat premium-looking design. Taking a closer look, you may find this design familiar with previous Realme devices. Revisiting the past, we first saw this soft plastic texture with vertical stripes on the Realme X Master Edition. The company highlighted that they teamed up with Naoto Fukasawa again to create this design. Also Read - Realme Narzo 10 vs Xiaomi Redmi Note 8: Price in India, specifications compared Personally, “That White” and “That Green” color look much better than the Onion and Garlic color options in the past. The company has also ensured that both the color options feature a matching metal frame on the sides. If you don’t like these colors then you can opt for a case to hide these colors. Regardless of the color preferences, the design manages to stand out in a crowded market. Talking about other aspects of the design, we get a familiar vertical camera setup at the top left corner. The device also comes with a dedicated fingerprint scanner on the back. We also get the power button on the right side and the volume buttons on the left. Looking at the bottom, we get a 3.5mm audio socket, a USB Type-C port, and speaker grills. The display of the smartphone features a waterdrop notch along with a thick chin at the bottom along with rounded corners. We also get a free transparent TPU case in the box to protect the smartphone against any damage. Realme Narzo 10 features a 6.5-inch display with HD+ resolution, 89.8 percent screen-to-body ratio, and “Mini-Drop” notch style. The company has also added 2.5D Gorilla Glass 3 on the display to protect it against scratches and damage. Users will also get a 20:9 aspect ratio screen along with a software-based Eye Care mode. Larger screen-size of the device made it difficult to reach the top of the device making the experience two-handed for most tasks. The device offers decent viewing angles with adequate brightness under direct sunlight. However, there is one thing that you should note regarding the display of the device. The smartphone does not come with Widevine L1 certification. Instead, we get L3 certification while prevents us from playing back in HD on Netflix and Amazon Prime Video. Moving to the software section, we get Android 10-based Realme UI out of the box. The in-house skin features a number of additional features before stock Android. These features include built-in themes, Realme Share, system-wide dark mode, smart sidebar, assistive ball, Digital Wellbeing, and more. We also get built-in screen recording, floating windows, payment, and file protection. Realme has also added a testing ground in the OS called “realme Lab” to test experimental features. Other features include Game Space, Split Screen, and App Cloner. During our review, the smartphone was running the RMX2040_11_A.15 build. The OS also comes with a third-party “HeyTap Cloud” feature to take a comprehensive backup of the device. Realme UI is quick and responsive with some amount of bloatware apps. These include “Videos”, “Music”, “Phone Manager”, “Hot Games”, “Hot Apps”, “Mail”, and more. Overall, it is a typical Realme affair that we have seen in the past.

The smartphone runs on MediaTek Helio G80 SoC along with an Octa-core CPU with Mali G52 GPU. As mentioned above, Narzo 10 is the first smartphone to feature G80 SoC in the Indian market. The device also features 4GB LPDDR4X RAM along with 128GB internal storage and a dedicated microSD card slot. Other features include Bluetooth v5.0, single-band 2.4GHz Wi-Fi, GPS, LTE, Proximity, Gyro- Acceleration, and Light sensors. Let’s check out how the device performs in different scenarios. During daily use, there was no stuttering or lag on the smartphone. The smartphone allowed me to jump between 5-6 apps without any loading. Though, loading varied depending on the type of apps that I was browsing. Things change while using heavy apps such as games. Here I did notice slightly long loading times and reloading. This won’t really matter much for regular users as the smartphone will be able to match your multi-tasking needs.

The highlight of the smartphone is the gaming aspect so made sure to test it properly. We tested two of the most popular titles in the Indian market, PUBG Mobile, and Call of Duty: Mobile. Beyond these, we also tested Asphalt 9, Temple Run 2, and Monument Valley. Talking about PUBG Mobile, Narzo 10 was able to run the game at HD resolution and High frame rate. We were able to run Call of Duty: Mobile at “Low” graphics quality at the “Medium” frame rate. There were occasional jitters while playing CoD: Mobile but it was “okay”. The smartphone did become considerably hot within 5-7 minutes of gaming. However, it did not result in a performance dip. Though, performance will dip if you are trying to record the screen at the same time while playing these games. The rest of the games performed will without any hiccup. The smartphone took 12-15 minutes to cool down due to the plastic back. Though you can use a case to transfer the heat, it will increase the cooldown time.

The smartphone features a quad-camera setup with a 48-megapixel primary sensor. Buyers will get an 8-megapixel sensor with an Ultra-wide lens with a 2-megapixel Black and White lens for the Portrait mode. The company has also added a 2-megapixel macro lens as the fourth camera on the smartphone. Moving to the front, we get a 16-megapixel selfie camera. Before we dive into the performance of the cameras, let’s check out the different camera modes and features. The smartphone features a dedicated “Night” mode along with the usual “Photo”, and “Video” modes. Camera UI also provides quick access to “Portrait”, and “48M” modes. Users can access “Time Lapse”, “Ultra Macro”, “Slo-Mo”, “Expert”, and “Pano” mode by tapping the “More” button. The top of the UI provides controls regarding Flash, Chroma Boost, and additional settings. One can toggle fingerprint shooting, shutter sound, location, flip selfie, touch to take photo, grid, AI scene recognition, watermark, and more in the camera “Settings”.

Now, let’s talk about the camera performance on the Realme Narzo 10. Diving head-on, the primary 48-megapixel camera manages to capture impressive images in ideal lighting conditions. The smartphone maker has managed to optimize the camera well to create good images. One can see good color reproduction, a decent amount of sharpness, focus, controlled noise, and fine level of details. The ultra-wide camera sensor is also decent with color reproduction closer to the primary sensor. Though, the overall exposure does take a hit along with the dynamic range. 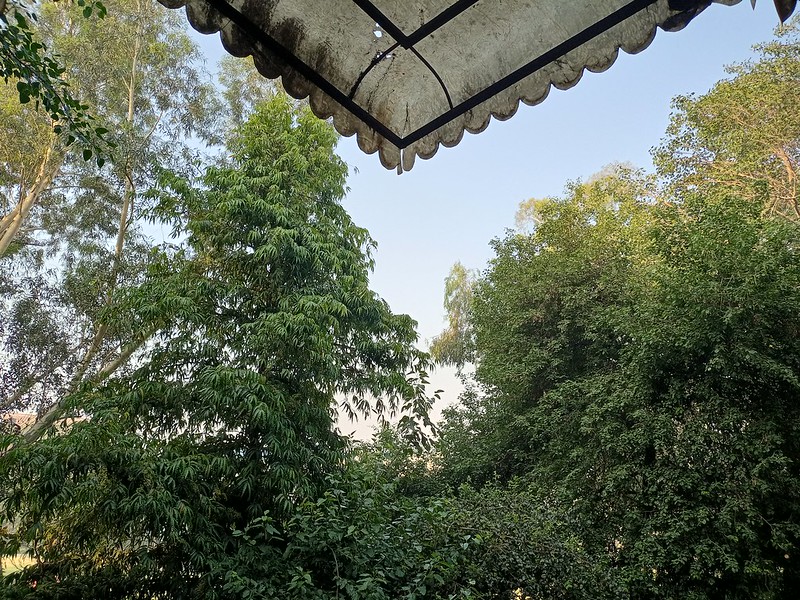 Moving to the night time, you get what you pay for. The regular mode offers images that are full of noise with no details, or sharpness. Switching to the night mode, we manage to gain slightly better exposure, slightly lesser amount of noise and more dynamic range. Considering that it is a budget smartphone, the smartphone manages to capture decent images. The Ultra Macro mode captures fine images but they are full of noise. Beyond this, the mode limits the output images to a meager 1,600×1,200 pixels resolution.

Coming to the selfie camera on the front, we get smoothed-out “Beauty” images by default. However, the camera manages decent images considering the price point. Last but not least, Narzo 10 also manages to capture decent images in the Portrait mode with good amount of background separation.

The second highlight of the smartphone is likely the large battery. Narzo 10 features a 5,000mAh battery along with 18W fast-charging support. We also get a USB Type-C port at the bottom of the device for charging and data transfer. The company has also added an 18W fast charging adapter in the box though it doesn’t seem to help. During our review, it consistently took about 2 hours and 10-15 minutes to charge the device from 0 to 100 percent. However, a massive battery means longer battery backup. During my average workday, the device lasted about 1.25 workdays or about 30-32 hours. This is likely due to the 720p display which doesn’t hog as much power. A casual, non-work day that usually results in heavy smartphone use provided 13-14 hours of battery backup. Pushing things up a notch, the device lasted about 7.5 to 8 hours while trying to drain the battery with continuous gaming.

Should one buy the Realme Narzo 10 Realme has crafted a decent smartphone to offer more options to consumers in the budget range. Narzo 10 sets out its target and manages to achieve it comfortably. As noted during the launch, it is a decent gaming-centric smartphone for youngsters on a tight budget. Though the device does not have any obvious flaws beyond the HD+ screen and Widevine L3 certification. But, there is not much beyond design and battery that makes Narzo 10 stand apart. Realme Narzo 10 with Helio G80 goes on first sale today at 12PM: Should you buy?

At Rs 11,999, the device is just Rs 2,000 cheaper than the Realme 6. If you can’t spend more than Rs 12,000 then get this else save up and buy the Realme 6. Looking beyond Realme, there are multiple options from Xiaomi, Samsung, and more. These options include Redmi Note 8, Note 9 Pro, Galaxy M21, and more.