Realme promises that the device will be able to provide a decent gaming experience without breaking the bank. Let’s check the claims in our Realme Narzo 10A review. Realme India recently launched its latest smartphone lineup, the Narzo 10 series in the market. As part of the series, the company revealed the Narzo 10, and the Narzo 10A on the stage. During the launch announcement, the company confirmed that it is aiming this lineup at youngsters with a tight budget. Beyond this, the company also revealed that the device will be able to provide a decent gaming experience without breaking the bank. We have already reviewed the Narzo 10 to find that it delivers on its promises. Also Read - Realme Narzo 10A set to go on sale today at 12PM: Price in India and other details

However, if you are on an even tighter budget, you may be looking at the 10A. Both the devices feature somewhat similar specifications including the display size, battery size, and more. The company has priced the device at just Rs 8,499 with Helio G70 SoC, 3GB RAM and32GB storage. Buyers will get the option to choose between “So Blue” and “So White” color options. Let’s dig deeper into the performance in our Realme Narzo 10A review. Also Read - Realme Narzo 10A sale in India tomorrow: Price, key features, offline and online availability Kicking things off, the first section talks about the design and build quality of the Realme Narzo 10A. The smartphone features an impressive design with a soft plastic texture on the back. This along with a seamless plastic body provides an unusually premium feeling to the smartphone. The device is available in two colors but I do feel that “So White” looks more classy than the “So Blue” option. We get a speaker grille, a 3.5mm audio socket, and a microUSB port on the bottom side of the smartphone. 10A features the volume buttons and the SIM-tray on the left side and the power button on the right side. The backside of the device features a large ‘realme’ branding aligned to the right side of the device. One can also notice the physical fingerprint scanner towards the middle in the upper half of the device. We also get a triple camera setup on the top left corner along with a single LED flash. Moving to the front, we see a familiar large 6.5-inch screen with a “Mini-drop” notch and a 20:9 aspect ratio. Overall, the build quality of the device is stellar. This is likely the reason that Narzo 10A does not feature a TPU case in the box. You may want to invest in such a case for peace of mind or to ensure that “So White” does not get dirty. Display and software experience on Narzo 10A Talking about the screen, things are somewhat identical to what I talked about in my Narzo 10 review. As mentioned, the device features a 5.5-inch screen with a 20:9 aspect ratio and an 89.8 percent screen-to-body ratio. The panel also features 1,600×720 pixels resolution along with Corning Gorilla Glass and a dedicated night mode. Overall, the panel provides ample brightness but you may want to seek shade under direct sunlight. The brightness of the display dips at extreme viewing angles but the color reproduction is good. This display is also quite reflective but it is fine considering the pricing. However, like Narzo 10, the 10A also features HD+ resolution along with Widevine L3 security certification. This means that you won’t be able to playback videos at HD resolution on Netflix or Amazon Prime Video. The Last Dance on Netflix

Moving on to the software, the 10A features Android 10-based Realme UI 1.0 with build number RMX2020_11_A.21. One gets the usual Realme UI experience with plenty of bloatware apps that you can remove and additional features. To recap, these features include App Cloner, Game Space, Split screen, “realme Lab”, “HeyTap Cloud” for backup, Digitial Wellbeing and parental controls, Assistive Ball, Smart Sidebar, and themes-based customization. The overall experience is decent with ever-so-slightly slow animations but overall fluid behavior. Realme Narzo 10A features MediaTek Helio G70 SoC instead of the G80 on the Narzo 10. The G70 is based on a 12nm manufacturing process with 8 CPU cores and Mali G52 GPU. We also get 3GB dual-channel LPDDR4X RAM, 32GB internal storage, and a dedicated microSD card slot. 10A also comes with Wi-Fi, Bluetooth 5.0, 4G LTE, GPS, dual-SIM support, and multiple sensors. These include Light, Proximity, Magnetic induction, Accelerometer, and fingerprint. On paper, these specifications are quite competitive with other offerings in this price segment. Let’s check out how they fare in real-world use.

10A performed well in my daily use without any interrupting lag, or jitters. However, 3GB RAM meant fewer apps in the memory and app reloads while moving beyond 4-5 moderately proper apps. Though, switching between 3-4 apps such as Instagram, Facebook, SMS, and the Dialler is no issue for a casual user. Heavier apps such as games did have noticeable loading time during multi-tasking but that should not be surprising. Now, let’s move to the gaming performance on the Narzo 10A. Realme has highlighted that it aims at providing good gaming performance to its users at a budget. And, similar to the 10, 10A also delivers on its promise. The overall performance is somewhat similar to the 10 when it comes to titles such as PUBG Mobile, and Call of Duty: Mobile. Other games also run fine including Monument Valley, Asphalt 9, Temple Run 2, and more. For some context, I was able to run PUBG Mobile at “HD” resolution at “High” frame rates and Call of Duty: Mobile at “Low” graphics quality, and “Medium” frame rate. However, I noticed that the touch response time of the display was slightly sluggish along with heating. The 10A became toasty within minutes of gaming but managed to maintain performance. You may want to invest in a case or just deal with the head on the backside of the device. I would suggest dealing with it so that the device can cool down faster after the gaming session. The device generally takes 10-15 minutes to cool down and similar to the 10, screen recording while gaming just makes things unplayable.

Camera performance and features on Narzo 10A Realme Narzo 10A features a 12-megapixel primary camera sensor along with a 2-megapixel portrait lens and a 2-megapixel macro lens. Moving to the front, we get a 5-megapixel front camera with f/2.4 aperture. The company has also added a single LED flash unit along with the triple camera setup on the back. Talking about the software, the device features the usual “Video”, “Photo”, “Portrait”, “Time-Lapse”, “Ultra Macro”, “Slo-Mo”, “Pano”, and “Expert” modes. We also get HDR, Chroma Boost, and built-in filters. One can also switch the aspect ratio, toggle timer, fingerprint shooting, shutter sound, grid, watermark, touch to shoot, and more. Most of these options are available in the Camera “Settings” on Narzo 10A. Talking about the performance, the camera is likely one of the weakest points for the 10A. The primary camera can capture decent images in ideal lighting conditions. Images have some amount of details, sharpness, and even noise in good lighting conditions. However, the dynamic range suffers a bit with blown-out highlights and slightly washed-out colors. Beyond this, the portrait lens manages just the “okay” level of background separation. Though, these images will work fine for social media uploads. However, the macro lens is not as useful as the images contain noise regardless of the lighting conditions. 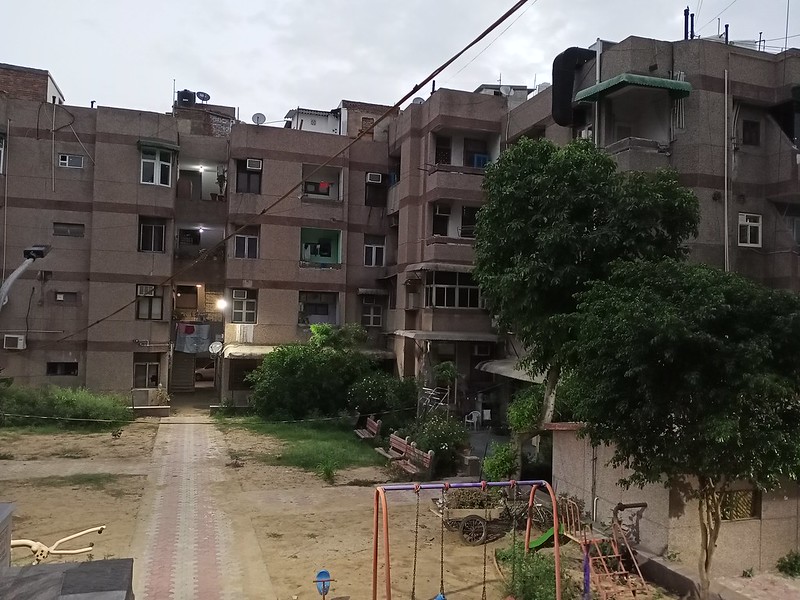 Things just fall apart in low-light with images lacking any detail, dynamic range, and clarity. Similarly, the 5-megapixel is not the best when it comes to capturing details or texture. The software turns the user into a painting with the by-default enabled beauty-mode features. However, you should not expect much from this camera given the price.

Realme has added a massive 5,000mAh battery along with a 10W charging adapter and support for reverse charging. Similar to its big-brother Narzo 10, the 10A crushes it in this segment with impressive battery backup. The device lasted about 1.35 days or about 33-34 hours on regular workdays. This includes constant emails on 4 accounts, 1-1.25 hours each of video and music streaming, 1-1.5 hours of gaming, 10-15 minutes of calls, and 7-8 images. Hammering it on non-work days we got about 12-14 hours of battery and trying to kill the battery with gaming got us 7-7.5 hours. Realme UI offers multiple power-saving and performance modes. along with app quick freeze, and screen battery optimization. However, one of the biggest problems with this device is charging time. the 10W charger and microUSB port take about 3 hours to charge the massive battery from 0 to 100 percent. The good part is the impressive backup and one can keep the phone for charging while sleeping. However, things are annoying when one has to charge the smartphone while gaming or performing other tasks. So, make sure that you switch on the wall outlet for charging before sleeping.

Should you buy the Realme Narzo 10A?

Stepping back, it looks like Realme Narzo 10A performs as per the promises. The company has created yet another smartphone for smartphone gamers with an extremely tight budget. In addition, it might be the perfect smartphone for first-time smartphone users during school or even while entering college. Considering the economic conditions due to coronavirus, 10A is likely ideal for buyers who want to play games but not in a competitive manner. Beyond the good design, software, and performance, it does have its flaws with L3 certification, camera, and battery charging speeds. However, anyone who likes Realme as a brand can go for this smartphone at Rs 8,499. The hardware is identical to the Realme C3 with one extra camera and an objectively better design. If you as on a limited budget then go for it else save up and purchase the Realme 5i. One can also look at Xiaomi Redmi 8 or the Vivo U10 before finalizing the purchase.