Realme Narzo 30 5G is the latest affordable 5G phone that tries to provide us with an equation of 5G and good on-paper specs on a budget, But is it an option right now? Let's find out. In a world where 5G is still a distant thought, smartphone makers are stamping the word on smartphones as a consolation prize. The idea is to keep us future-ready, something people are most likely to get inclined to. And when this can happen on a budget, one would want to jump and grab the opportunity. Also Read - Poco M3 Pro vs Realme Narzo 30: Which 5G phone to go for based on usage?

Such is the case with the recent Realme Narzo 30 5G. A package that consists of features that are capable of enticing: a 90Hz display, 48MP cameras, a 5,000mAh battery, and of course, 5G. But is the future ready for this future-ready offering and should it be chosen over its highly competitive 4G counterparts? Also Read - Top phones launched in India in June 2021: Mi 11 Lite, JioPhone Next and more

Realme has decided to avoid wearing its experiment hat and hence, we got a rather simple-looking Narzo 30 5G. After using the too-bold Realme 8 Pro, this option balances things out. Despite taking a minimal road, it can attract many.

The added glam to the phone is the textured strip running down on one side of the back panel. It is like a piece of accessory to the otherwise basic outfit, which is most likely to go well on almost every occasion. This time, the company branding is pretty minimal too: After the in-the-face ‘Dare To Leap’ logo seen on the Realme 8 Pro, you get one that might not visible from certain angles. We got the Narzo 30 5G in the Racing Silver and trust me, this is an attractive colour option. Plus, the glossy back isn’t readily waiting for smudges but mostly stays clean. All this packaged in a plastic chassis that doesn’t feel heavy. But at 185 grams, it isn’t the lightest of them all. That said, the build quality is good with the ports and buttons sporting a good finish.

Other details are something we have seen before: a rectangular rear camera bump that doesn’t look hideous, a USB Type-C port, and a 3.5mm audio jack so that you can easily use your old earphones. Upfront, you get a punch-hole display that gets slim bezels but a significant chin area. The added element that sticks out is a big punch-hole that you can’t help but notice almost all the time. But all this aside, the phone gets a screen protector, which will let you keep your phone safe until you get a much sturdier tempered glass coating.

On paper, the Narzo 30’s display appears impressive. A 6.5-inch screen with a Full HD+ screen resolution and a 90Hz refresh rate. You get all the bells and whistles for you to consider this option.

In real-life usage, the display feels compromised. The viewing experience has been just average and colours mostly feel washed out. Despite a high screen resolution, YouTube videos lacked bright colours. But, enabling the 90Hz refresh rate makes things smooth. Another good thing is that the phone manages well under sunlight and you can view content easily outdoors.

The Narzo 30 5G gets a MediaTek Dimensity 700 chip, which has also made its way to the Realme 8 5G and the Poco M3 Pro 5G. In our Poco M3 Pro 5G review, we saw that the chip was of great help during a number of situations thrown at the phone. In Narzo 30’s case, this perception is taken forward. The phone also comes with 6GB of RAM and 128GB of storage.

The phone is a smooth performer and its abilities are similar to that of the Realme 8 Pro I used before. The usual chores such as calling, messaging, social media surfing, using Google, taking photos, and more get done easily. There’s hardly any lag that you will witness. It is kind enough to let me explore new sites to shop whilst doing a number of other tasks on the side. Things became smoother without any bumps with the 90Hz display mode switched on. I played the highly popular Battlegrounds Mobile India. The phone, with medium graphics and high frame rates, turned on was able to easily let me feel the PUBG Mobile nostalgia. I made some kills too. But, switching to the combination of high graphics and high frame rate, took a toll on the gameplay and there were visible jitters. It would be safe to keep the settings a bit on the lower end to keep things smooth.

Realme UI 2.0 based on Android 11 keeps things mellow. This time I tried customising things a bit with the number of theme options available and the result was eye-pleasing. Although, I would like Realme to add some more free wallpaper/theme options. There’s a number of preloaded apps that can make the UI a bit too stuffed. While apps like Netflix, Amazon, and even Snapchat would save you the hassle of the extra downloading time, others you might wanna toss-up the bin. The phone gets a single speaker, which is just average. While I didn’t face any network issue with my Jio number, I did have issues with calling. The volume levels are really low and only the loudspeaker was able to help me conduct a decent calling session. Among others, there’s a side-mounted fingerprint scanner, which is quite fast. Unlike the ones on the Redmi phones, you wouldn’t need to press them to unlock the phone.

Here’s something we have seen a number of times before. A 48-megapixel main camera clubbed with a 2-megapixel macro camera and a 2-megapixel B&W lens. While big numbers raise big expectations, don’t get too excited. The main camera reproduces decent colours and details in broad daylight but evening shots go a bit grainy and muted. Mor often than not, the colours feel washed out and you will find a saturated output. There’s support for up to 5X digital zoom, which is good though. It is decent enough for you to easily read a hoarding at a distance.

The Portrait mode ensures a decent bokeh effect but the subject separation often appears artificial. Plus, the colours end up being more processed as compared to the main camera’s output. The macro lens is fine but isn’t on par with what we saw on the Redmi Note 10 phones. That’s a standard we are looking at! 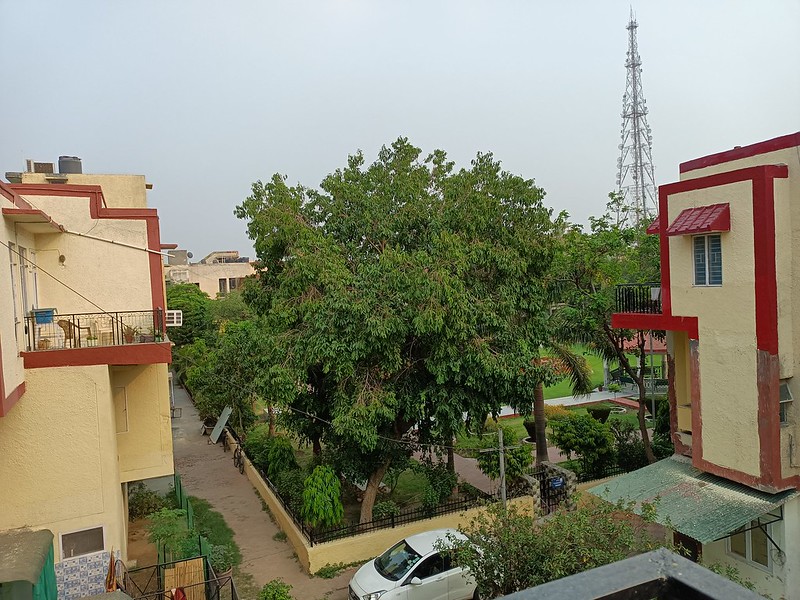 The 16-megapixel front camera tends to give a beautified output even when the beauty level is set to zero. While I am not a fan, this might be liked by many who like to apply filters on their selfies. The phone can capture 4K videos at 30fps. The video quality is average and matches the output of the photos taken from the main camera. Except, there is some graininess and lacks proper stabilisation.

The phone sources power from a 5,000mAh battery, which is limited to 18W of fast charging. But, you do get to use the phone for over a day if you are following a moderate usage cycle. Increasing it a bit (maybe more gaming or internet usage) can pull down the battery backup to a day. But, this isn’t bad either.

What might be deemed unpleasant is the 18W fast charging support. It isn’t fast really and takes close to two hours for the phone to get fully charged. With us getting accustomed to fast charging, I wish the Realme Narzo 30 5G could have had faster charging capabilities, much like its cousins and siblings.

5G is a matter of the future and by bringing the future element into the present, Realme (among many other companies) is missing out on the elements that matter now. For instance, providing an AMOLED display and a faster charging makes more sense now. Will this phone hold its own in 5 years, when 5G may go commercial? Probably no, unless Realme figures out a magic potion to keep old phones running like new. Jokes aside, there will be more chips succeeding the Dimensity 700, better camera tech, and, on the whole, something even better to look forward to from Realme itself. The company could instead focus more on the present and provide what matters more now.

Plus, its existence is questionable, considering Realme already has a similarly-specced Realme 8 5G, that too, at a slightly affordable price.

If the Realme Narzo 30 5G intrigues you, this is nowhere a bad option to consider. But, if you don’t want the 5G-associated compromises, the 4G-only Xiaomi Redmi Note 10 Pro and even the Realme 8 are better choices for a 4G-only India.