How does the Realme X2 stand in an increasingly crowded market? Does it really offer a good gaming experience at an affordable price? Let’s find answers to all the questions in our review. Smartphone maker Realme launched its much anticipated gaming-focused smartphone, the Realme X2 at an event in Delhi. Realme initially announced the launch of the smartphone along with the launch of Realme XT back in September. During the announcement, the company referred to the smartphone as the Realme XT 730G instead of the Realme X2. The company is today launching three different RAM and storage variants. These include base model with 4GB RAM and 64GB storage, and 6GB RAM and 128GB storage variant. The third variant sports 8GB RAM with 128GB storage. Also Read - Realme Buds Air true wireless earbuds launched in India, priced at Rs 3,999

Realme has priced the smartphone starting at Rs 16,999 for the base model. Interested buyers can head to Realme.com and Flipkart to make the purchase. So how does the smartphone stand in an increasingly crowded market? Does it really offer a good gaming experience at an affordable price? Let’s find answers to all the questions in our Realme X2 review. Also Read - Realme X2 launched in India: Features Snapdragon 730G SoC, 64-megapixel camera and more The first thing that you will notice when you take the smartphone out of the box is the design and build quality. Realme X2 comes with a familiar design with an almost edge-to-edge display, glossy back with gradient finish, and vertically-stacked camera setup. Similar to most devices in the market, it features a USB Type-C port along with a 3.5-mm audio socket. Talking about the design, there is not much that stands out in this sea of somewhat similar looking designs. Though, to offer more options, the company has introduced a new Pearl Green option in addition to the White and the Black variants.

The device is well built with no obvious defects in manufacturing. The company has also added Gorilla Glass 5 on the back panel to make it more durable. Though, the rear glass does attract smudges and fingerprints easily. Inspecting the build quality closely; Realme has continued to offer solid devices. Both the design and build quality are what you would expect and want from a modern 2019 smartphone. Realme X2 sports a 6.4-inch display with FHD+ (2340×1080 pixels) resolution with Super AMOLED panel. It also comes with 430 nit peak brightness and 402 PPI screen density. The colors on the display are vibrant and punchy with adequate brightness. Though, the brightness levels take a hit from extreme viewing angles. X2 held up quite well under direct sunlight but the panel itself is quite reflective making extended usage a bit challenging. The company has also ensured Widevine L1 support along with HDR, and Wide Color Gamut for great multimedia support. I was able to enjoy all my favorite shows on Netflix, Amazon Prime Video and YouTube Red in high definition. The company has also added an in-display fingerprint scanner on the device. The technology has evolved over the years to provide a reasonably fast experience to users.

Next up, let’s move to the performance section of the smartphone. The smartphone is powered by Qualcomm Snapdragon 730G SoC clocked at 2.2GHz. In addition, it also features Adreno 618 GPU to handle the graphics department. As noted above, the device will come with up to 8GB LPDDR4X RAM, and up to 128GB UFS 2.1 storage. Realme has also added a dedicated microSD card slot on the device.

It also features Wi-Fi, hotspot, Bluetooth v5.0, FM Radio, and GPS for connectivity. As noted in the design section, the company is going with a USB Type-C port along with an accelerometer, gyroscope, light, magnetic induction, and proximity sensor.

Daily tasks and the software

Before we dive into the gaming performance, let’s talk about how the Realme X2 performs in daily tasks. Taking a closer look, there was no lag or slowdown across any part of the system. I was able to regularly switch between 10-12 apps while multi-tasking without prolonged loading times. Beyond the usual somewhat slow animations that come with ColorOS, I did not find many issues while using the smartphone. I did encounter some jitters while unlocking the device sometimes. However, the company will likely fix these in future updates. It is also worth noting that the smartphone still comes with Android 9-based ColorOS 6.1 out-of-the-box. Realme confirmed that it is working on an Android 10-based update. I won’t focus much on ColorOS as it is similar to what we have seen on past Realme devices. Check out our Realme 5S review to read more about ColorOS 6.1. Beyond this, the review device features October 5, 2019, Android security patch. Realme X2 chewed through most of the games that I threw at it. This includes top of the line games including PUBG Mobile, Call of Duty Mobile, and Asphalt 9. The device ran all the games at the highest quality settings with no jitters and minimal lag. I tried to push the device to its limits with 1.5-2 hour-long gaming sessions. The device did heat up after 15-20 minutes, but it managed to keep the temperatures under the bearable level.

The heat also did not have a major impact on gaming performance. On the software end, the OS comes with Game Space where users can add installed games. Users can use this mode to block any distracting notifications while improving the performance of the device. I also tried to run Shadow Gun Legends, Dead Trigger 2, and Breakneck. The Realme X2 features a quad camera setup on the back with a 64-megapixel primary Samsung GW1 sensor. This is the same sensor that the company used in its Realme X2 Pro. Rest includes an 8-megapixel sensor with an ultra-wide lens, a 2-megapixel sensor with a super macro sensor, and a 2-megapixel depth sensor. The company has also added a 32-megapixel sensor on the front for selfie images. Realme has added multiple specialized modes on the software side to take benefit of the rear quad camera setup. This includes the Super Nightscape, 64-megapixel mode, panorama, professional, time-lapse, HDR, Ultra-wide, macro mode, and AI Beautification. Other modes also include Scene recognition, built-in filters, Video Bokeh, Anti-Shake and more. You can check the camera samples in the gallery embedded below. 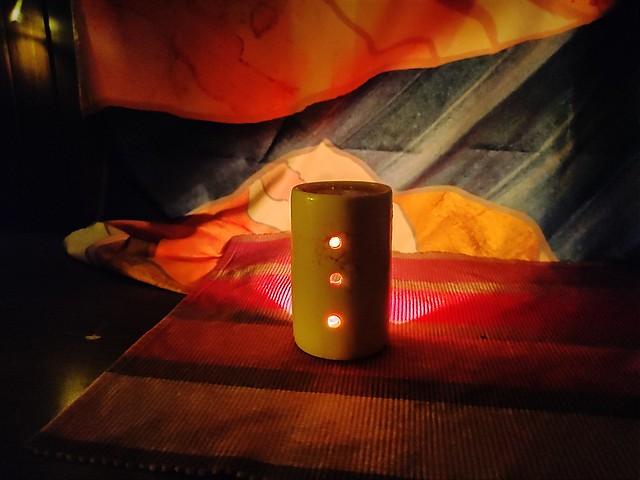 Realme claims that it has improved the image processing of the primary 64-megapixel sensor. Taking a closer look at the images, the company has done a good job of capturing details. Images shot ideal light come with accurate exposure, color balance, and minimal noise. However, images show in the Ultra 64 mode are filled with fine grain and noise. Images shot in low light suffer noise because of a bit narrow aperture.

In addition, image processing during night time affects the texture and details of the images. The Super Nightscape mode helps eliminate much of the noise and add some contrast and vibrancy. Ultra 64 images shot during night time are full of noise as their are straight from the sensor. Moving to the front camera, the images shot are decent in exposure and details. Portrait images have good background isolation with minimal errors. Overall, the images shot both on the rear and front camera are good. Realme can make improvements with future updates but there is only so much one can get for the price.

The Realme X2 is backed by a 4,000mAh battery with support for VOOC Flash Charge 4.0. It may not be as incredible as the technology in the Realme X2 Pro, but it manages to hold its own with 30W power rating. During my review, it took me about 75 minutes to charge the device from 0 to 100 percent. This speed is on par with what we have seen on most flagship or premium segment smartphones. The device usually lasts a full workday, dying after 12 hours of charging. This number drops to about 7.5-8 hours on an extremely heavy usage day. A heavy use date comprises of 1.25-2 hours of video streaming, five email accounts on sync, WhatsApp, Telegram, 1.5-2 hours of gaming, 1.5-2 hours of music streaming, 15-20 minutes of calls, and 15-18 images.

Should you buy the Realme X2? Realme has yet again managed to craft a compelling package. The device offering a modern design with an impressive performance at an affordable price. Multiple RAM and storage combinations ensure that users have some wiggle room when it comes to their budget. The company takes on the likes of Xiaomi Redmi Note 8 Pro, Samsung Galaxy A50, and more in the sub Rs 20,000. Realme also offers a decent option in the mid-range segment to people who don’t have the means to buy the Realme X2 Pro. If you want to get a Realme smartphone, you have plenty of options. However, if you are looking at smartphones beyond the X2, Redmi Note 8 Pro is a good option.