This reveal makes Realme the first smartphone company to formally announce a smartphone with 64-megapixel primary camera while beating Xiaomi to the punch. Here are my first impressions of the Realme XT. Smartphone maker Realme has just revealed its upcoming smartphone, Realme XT on the global stage. This reveal makes it the first smartphone company in the world to formally announce a smartphone with 64-megapixel primary camera. The company also shared the specifications of the device as part of the unveiling. However, the company has not shared the pricing or availability details of the smartphone. Realme clarified that it is planning to launch its upcoming smartphone sometime next month. In the meantime, the company sent us the Realme XT to experience and test out the 64-megapixel camera sensor. Also Read - Realme XT with 64MP quad camera setup unveiled in India: Check full specifications, features

Also Read - Realme 5 to go on sale on August 30 via Realme.com and Flipkart: Price, offers and other details

Realme has essentially managed to beat Xiaomi to become the first smartphone maker with a 64-megapixel camera. Xiaomi is all set to launch its own 64-megapixel smartphone at a launch event in China on August 29. As per previous reports, the company is likely to add the 64-megapixel sensor in its upcoming Xiaomi Redmi Note 8 Pro. However, moving back to Realme here are my first impressions of the Realme XT. Also Read - Realme Q launch set for September 5; to feature quad rear cameras The first thing and probably the highlight of the Realme XT is the 64-megapixel primary camera sensor. The smartphone features a quad-camera setup on the back along with a single sensor on the front for selfies. The rear camera setup also includes an 8-megapixel ultra-wide sensor with a 2-megapixel macro lens and a 2-megapixel depth sensor. Moving to the front, users will get a 16-megapixel camera for selfies. Realme also revealed that it has used the Samsung ISOCELL Bright GW1 sensor for the 64-megapixel camera. The front camera uses the Sony IMX 471 sensor for selfie images. I tested out the 64-megapixel sensor to capture some sample images. The images showcase impressive dynamic range in ideal lighting conditions. However, Realme did mention that it was continuously working on improving the image processing algorithms for the camera. This work in progress element is visible in images shot in challenging situations such as extreme low-light or HDR situations. So, it is likely that the Realme XT will offer an improved camera experience at the official launch of the smartphone. In the meantime, you can check the sample images in the gallery below. 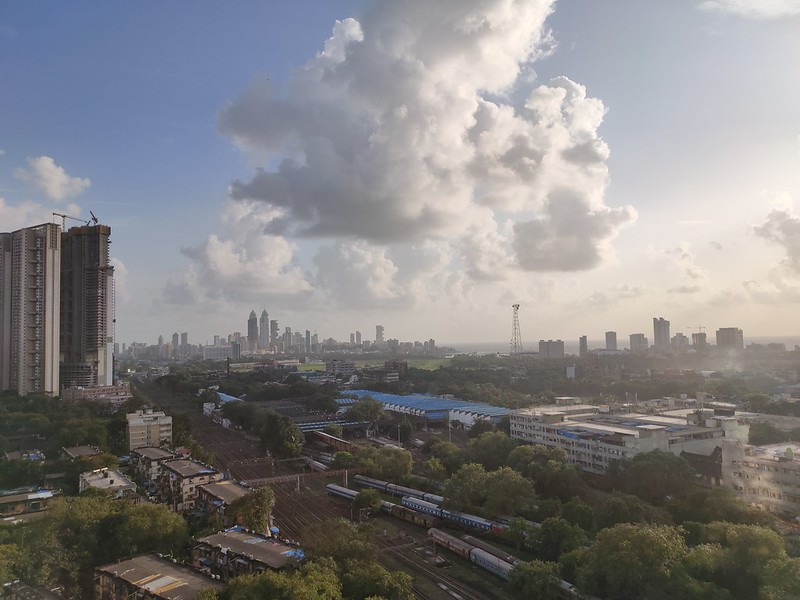 The company has also added a dedicated microSD card slot in the device to allow expandable storage. The company has also added Gorilla Glass 5 both on the front and the back panel for protection against damage. It clarified that the device features a poly-carbonate frame on the sides. Realme XT runss on a 4,000mAh battery with support for VOOC 3.0 fast charging technology. On the software side of things, we get Android 9 Pie-powered ColorOS 6 out-of-the-box. Last but not least, the device will be available in two colors including Pearl White and Pearl Blue. The Realme XT features a unique gradient finish on the back that changes its colors depending on how the light hits the smartphone. Beyond the color, the back panel also reflects the light in a unique convex pattern. The back panel also curves to the sides to join the sliver poly-carbonate frame on the sides. Realme has also added a Golden accent to the power button to make it stand out from rest of the buttons of the device. All these design choices make the Realme XT stand apart from the crowd.

I was quite impressed by Realme XT in my limited time of testing the smartphone. The company has managed to pack a first in the world technology with decent output in a stylish body. What is more impressive is how Realme is not afraid to take on Xiaomi in terms of both the innovation as well as the looks. The pricing for the Realme XT is not out yet and Redmi Note 8 Pro has not been launched yet so we can t really comment on the pricing part of things. Realme revealed that it will officially launch its Realme XT before the end of September 2019. However, this unveiling does give them the first to the market bragging rights. Even though the device looks good on paper, wait for our full review for a proper conclusion about the Realme XT.