The Redmi 9 Prime is one of the best phones you can buy at Rs 10,000 currently. Xiaomi ticks all the right boxes and then adds some to make it a Prime package for a budget smartphone seeker. The year 2020 isn’t a good year for smartphone buyers. First came the COVID-19 pandemic, messing up supply chains across the globe, and then there was the government’s tax hike in April. All of these resulted is smartphones getting pricier by up to Rs 4,000 on an average. Take note of the Redmi Note 8’s price hike in the last five months as an example. Coming up with a new phone at a low budget without compromising on essential features and then, adding some bling, is a tough task for smartphone manufacturers in the current times. Also Read - Xiaomi Mi TV 4A Horizon Edition 43 vs OnePlus TV 43 Y1: Full specs comparison

That said, Xiaomi took us by surprise with its Redmi 9 Prime. Launched little over a month ago, the Redmi 9 Prime felt as if Xiaomi’s product team was given a free hand for designing this phone. It’s using the “Prime” moniker, which is the first time since the Redmi 3S Prime from 2016. On paper, the specifications make this an exciting phone, given the alternatives for the same price. It has got a big display, massive battery, decent chipset, and a fashionable quad-camera setup – all at a starting price of Rs 9,999. I was a bit skeptical initially of the compromises Xiaomi incorporated in it, but after using it for a few weeks, it left me impressed. Also Read - Xiaomi Redmi Note 10 renders reveal design, 48MP quad rear camera setup

For Rs 10,000, all the smartphones you can buy today come with plastic bodies and dated front designs. The Realme C15, Realme Narzo 10A, Motorola G8 Power Lite, and Moto G9 – they all look and feel tailored to a budget. Getting a good quality finish for a plastic-bodied phone is tough but Xiaomi has a few tricks of its own to stand out. No, there’s no glass build here similar to the Redmi Note 8 from 2019. Also Read - Redmi 9 vs Redmi 9 Prime: Which one should you choose under Rs 10,000?

The Redmi 9 Prime is made of plastic too but it won me over with its build quality. The matte textured plastic back is grippy and smudge resistant. With the pastel gradient colors, the Redmi 9 Prime looks stunning for a smartphone at any price. My unit came draped in the Space Blue colors and I couldn’t take my eyes off it – easily the best-looking phone in its price range. The design is reminiscent of the Poco X2 but the matte finish elevates its look and feel. The subtle circular camera pattern also adds to the charm. On the whole, it’s a cute design. Despite packing a massive 5020mAh battery, the Prime masks its bulk well. It feels slim and ergonomic to hold, despite its huge size and the 198-gram weight. The buttons are tactile and well within reach even if you are using it with one-hand. The display has slimmer bezels than an equivalent Realme phone. Additionally, it is a joy to see a USB-C port present on a phone this affordable.

Xiaomi is almost unbeatable in the value game. In an age where all manufacturers are heading for HD displays in the sub-Rs 15,000 segment to save costs, Xiaomi stands out. The Redmi 9 Prime is probably the only phone at Rs 10,000 to get a Full HD+ display. I may sound nerdy but a 1080p display stands out with its sharpness over a 720p display any given day. The 6.5-inch IPS LCD display renders vibrant colors and decent brightness levels. Viewing angles are wide and the touchscreen responsiveness was good. The camera notch is less intrusive and it is barely noticeable once you get used to the phone. In my daily use, I enjoyed watching YouTube videos and movies on Hotstar a lot on the Prime. The Full HD+ resolution makes a lot of difference to the sharpness. I have used the Realme C12 and Motorola Moto G9 too recently and none of them offer such a nice viewing experience. Xiaomi offers a pre-applied screen protector on the display – nice touch Xiaomi.

Similar to the Realme phones, Xiaomi has stuck to a MediaTek Helio G80 chipset for the Redmi 9 Prime. This SoC makes the Prime one of the most powerful phones in its class. Coupled with 4GB RAM as standard and up to 128GB of storage, this phone will seek the attention of the nerds on a budget. You also get an option to expand the storage via a micro SD card slot.

The Helio G80 is a decent chip to play games on and the Redmi 9 Prime shows that with pride. I tried everyone’s dear PUBG Mobile before it goes out of reach and sure enough, it played nicely. The graphics settings were set to low and I could achieve High frame rates, with frequent frame drops. Call of Duty Mobile also played in similar settings. However, there were occasional lags and frame drops in every match I played. A couple of casual games such as Temple Run 2 and Candy Crush played effortlessly. While the gaming performance was decent, there is a scope for improvement in daily performance. The Redmi 9 Prime currently runs on MIUI 11 based on Android 10. I have seen MIUI 11 on umpteen of Xiaomi phones and on the Prime, it is struggling for fluidity. The UI is jittery and there’s a noticeable pause for a few seconds before an opens. Given that Helio G80 is capable enough, I suspect a buggy software. Maybe an update could iron out the lags.

Micro hiccups aside, MIUI 11 is as feature-rich as it has ever been. Customization freaks love it for the tweaking options it provides at system levels. With MIUI 12, I expect the experience to only improve. My unit came with an older build of MIUI and hence, it had Zili and a few of those banned apps. There were also a bunch of poor quality games pre-loaded, with suggestions to download more of them. The Mi Browser was installed too but it wasn’t serving any ads. Xiaomi notifies users about the government ban and urges users to not use it until an update disables the browser. Audio comes out of a single bottom-mounted loudspeaker and it works nicely for the most part. The audio quality is decent and it can go plenty loud. If you want privacy, there’s a 3.5mm headphone jack that delivers better quality audio through wired headphones. I paired my Mi True Wireless Earphones 2 with the Prime and it played along very well.

Cameras: Versatility comes at the cost of quality

Quad-cameras is a new thing for the budget smartphone space. The Redmi 9 Prime has four cameras on its back too. The main camera uses a 13-megapixel sensor paired to an 8-megapixel ultra-wide-angle camera. There’s also a 5-megapixel macro camera and a 2-megapixel depth camera. These aren’t boastful numbers but Xiaomi has managed to make the most out of what’s available.

The main camera pleases in broad daylight scenarios. Photos have a decent amount of details and manage exposures well. Colors are bright and vibrant, similar to Xiaomi’s other smartphone cameras. The lack of a 48-megapixel camera does affect the details when you zoom in. That said, there’s hardly much to complain about, given the price. With light levels falling, the main camera starts struggling for exposure and it tries hard to suppress grains. Photos, as a result, are softer on details and gain a watercolor-like texture. With no Night Mode here, photos in the dark are barely usable, unless you are willing to switch on the LED flash.

The ultra-wide camera falls short of the main camera in its dynamic range. Colors appear dull and exposures aren’t on the same level as the main camera. Wit light levels falling, the quality of the photos deteriorates further. That said, if you manage to get the lighting right, the photos look interesting without distortion on the edges. 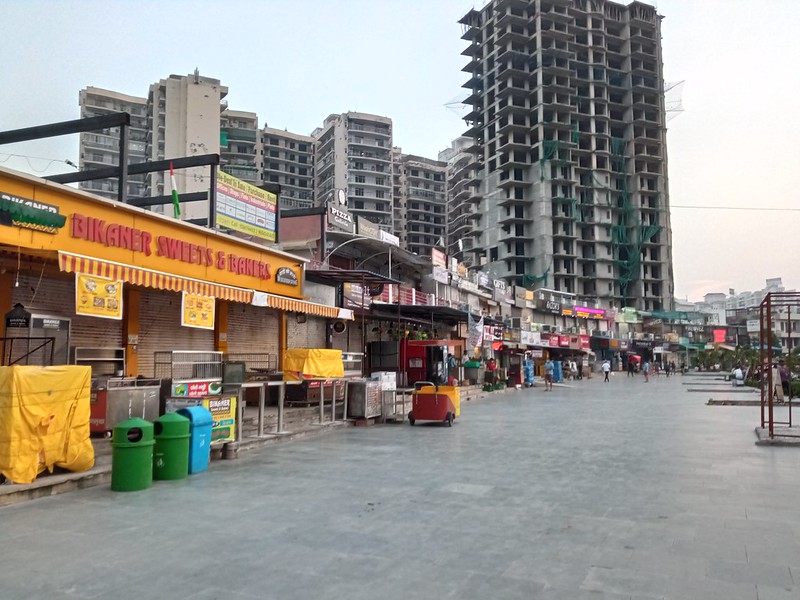 Macro cameras are usually there for the sake of being there. In this instance, though, I found myself actually using the macro camera. Xiaomi has picked the impressive 5-megapixel macro camera from the Redmi Note 9 Pro Max. The result is sharp macro photos with good colors and decent contrasts. It’s probably the only macro camera I will use to share photos on my social media feed.

Lastly, portrait mode photos have impressive subject separation. The blurring feels natural and Xiaomi’s software tuning makes for good looking portrait mode photos. The selfie camera on the front performs nicely and returns good looking photos in most conditions. With beauty modes turned off, the camera picked up a lot of facial details and kept the colors lively. There were occasional issues with the exposures in the background. The subject separation in portrait mode is also impressive for a phone of its price. With its 5020mAh battery and MIUI’s power-saving tweaks, the Redmi 9 Prime easily lasted me for a day and half on a single charge. I was using the phone for web and social media browsing, streaming music, watching lots of YouTube, occasional PUBG Mobile sessions, a few photography sessions and lots of texting on WhatsApp. There’s support for 18W fast charging and it took me almost two hours to fill it up. The presence of a USB-C port is a welcome change in this segment. Do note that you only get a 10W charger in the box.

Redmi 9 Prime Verdict: Should you buy it?

I am struggling for reasons as to why you shouldn’t. The Redmi 9 Prime is an impressive phone for what it costs. I am amazed to see how Xiaomi managed to offer such a polished package at such an affordable price point. The Prime is built nicely and looks funky – easily the most eye-catching phone design in my opinion at Rs 10,000. The 1080p display adds to the list of “Ayes” and so does the long battery life. I like the camera performance too and overlooking the MIUI 11 bugs, I found the phone to be capable enough as a reliable daily driver. On the whole, there’s not a whole to complain about the Redmi 9 Prime. Compared to the phones from Realme, Samsung and Motorola, the Redmi 9 Prime feels from a category higher. There’s nothing in its price that’s as polished and well-rounded as the Redmi 9 Prime, thereby making it an absolute recommendation at Rs 10,000.