Redmi 9 Review: Overshadowed by its siblings

Check out our review of the Xiaomi Redmi 9 entry-level phone, and whether you should buy it for Rs 8,999. Just when you thought Xiaomi’s Redmi 9 series of phones is done, another one seems to pop out of nowhere! The Xiaomi Redmi 9, launched a couple of weeks ago is the latest in the brand’s budget series lineup and comes as an affordable, toned-down version of the higher-end Redmi 9 Prime. Priced at the Rs 8,999 margin, the Redmi 9 comes with key highlights like a MediaTek Helio G35 chipset, triple rear cameras, and a 5,000mAh battery. Well, the Redmi 9 Prime is a great value for money proposition that starts at just 1,000 more. Does this make the base Redmi 9 unnecessary? Read on our review to find out. Also Read - Xiaomi Redmi 9 flash sale in India today at 12PM: Offers, price, specifications

The Redmi 9 is made completely out of plastic and the sides are made to look like brushed metal. However, while the plastic build may not feel the sturdiest in hand, the phone is still well built. No creaks or wobbly buttons here. There are the usual power button + volume rockers set up on the right of the device. A SIM-tray goes on the left. On the bottom are a single microphone, micro USB port, and a speaker grille. The top only a 3.5mm port. Also Read - Xiaomi Redmi 9A flash sale today via Amazon: Price, specifications and features

The back of the phone carries a unique matte-finished ridged pattern that looks really nice on the blue variant that we have. There is the company’s branding on the bottom of the back and a separate “AI camera” label below the square camera module that looks silly and takes away from the classy, minimal feel of the device. The module is also a dual-camera setup, made to look like a triple camera setup like the one on the Pixel 4; More on that later. Also on the back is a fingerprint reader that works accurately and fast. Overall, the Redmi 9 wins in the design department. Also Read - Redmi 9 Prime review: Take a bow, Xiaomi The Redmi 9 features a 6.53-inch HD+ display. The LCD panel has a 20:9 aspect ratio and a waterdrop notch on the top. The screen features good viewing angles and is also fairly bright. Colors look about as good as you’d expect from an LCD panel at this price. Thanks to MIUI, you also have the option to set your color preference to either the ‘Saturated’ (Vivid) or the Standard mode. The device runs Android 10 with MIUI 12 on top right out of the box. The experience you get here is just like other budget Redmi phones. The software is packed with features and MIUI 12 in particular looks better than ever before with more refined design elements. However, some of the pitfalls of MIUI 12 are also present here. The pre-installed bloatware, the ads, and the controversies are things you will get in the package. That being said, finding a decent phone with clean software at this price point is very hard. Of the custom skins, you do get below the Rs 10,000 bracket, MIUI 12 is still one of the better ones. We’ve recently been seeing this new trend where smartphone manufacturers add in a couple of useless, low-resolution camera sensors just so that they could call their phones a triple-camera or quad-camera phone. The Redmi 9 takes that gimmick to another level by adding a quad module on the back, simulating the appearance of a quad-camera setup when it actually features just two lenses.

If you look at the Redmi 9’s module, the two lenses on top are the real sensors. The bottom left one is actually the flash and the bottom right is not even a sensor, just a false placeholder. So yes, the only sensors you get here are the 13-megapixel primary sensor and a 2-megapixel depth sensor. Coming to the pictures themselves, we found the quality to be good given some decent lighting. Shots came out looking crisp and vivid. The auto-focusing speed wasn’t the best, but if you have patience, you can get some really good photos from the Redmi 9. Camera performance in low-light and artificial lighting was also pretty good considering this is a budget phone. However, details took a big hit. Photos occasionally appeared noisy and isolated light sources often have a scattered glow, but that can be expected at this price point. Check out our samples below. 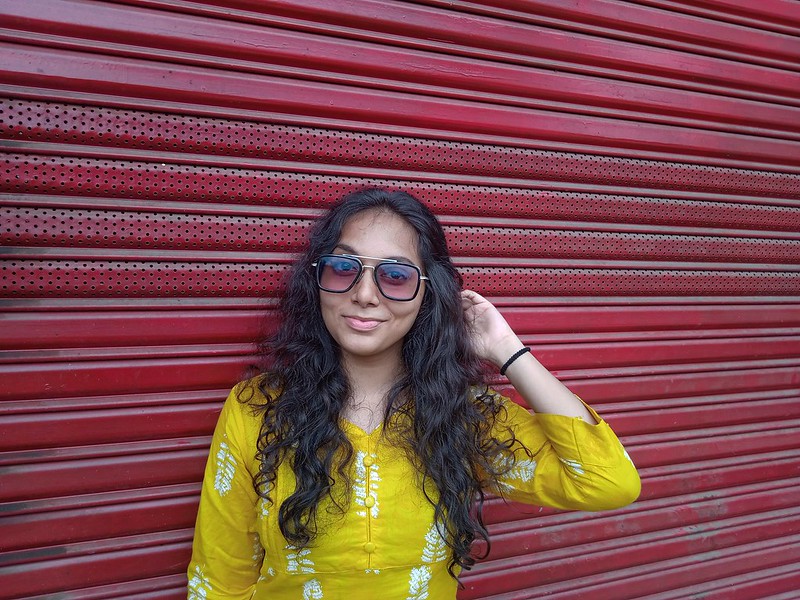 Coming to the 5-megapixel front camera, we found satisfactory results, but we really wished this was at least an 8-megapixel sensor, to keep photo-resolution on par with the competition. Regardless, photos maintained good color, and exposure levels in selfies also looked normal. However, the lack of details left us wanting more.

The Redmi 9 is powered by a MediaTek Helio G35 SoC with 4GB RAM. This combination gives you decent entry-level performance. The phone is hence good for day-to-day tasks and can handle a bunch of light to medium apps at once. While there was no ‘lag’ through our experience, the phone did have its moments where the weight of the heavy UI and multiple apps running at once showed through. While the Redmi 9 can handle more graphically demanding or resource-heavy apps, performance is drastically affected. Overall, the experience is what you would expect from a phone running the Helio G35. The processor itself isn’t bad but feels overpriced in this segment, where phones like Xiaomi’s own Redmi 9 Prime which cost a little more perform much better. The Redmi 9 offers some phenomenal battery life thanks to the 5,000mAh battery coupled with the low-resolution screen and a processor that doesn’t demand a lot. This easily makes this a two-day device which could on light use maybe even be stretched to two and a half days. However, the catch here is the charging speed. We didn’t expect flagship-level charging speeds for the budget phone, but at least 18W fast charging would have been a great addition. The 10W charging speed makes a full charge of the 5,000mAh battery on the phone painfully slow. You would most likely end up charging the Redmi 9 overnight. The good news is, once that battery is topped off, you don’t have to worry about it until the next day. The Redmi 9 is a decent overall package for an entry-level smartphone. No particular aspect of the device comes off as bad specifically. In fact, it is one of the cheapest phones to feature 4GB RAM. However, with the Indian smartphone market context in mind, the Redmi 9 is easily outperformed by competition, including Xiaomi’s own Redmi 9 Prime. For that extra Rs 1,000, you end up getting a much better overall device in the 9 Prime. This makes the 9 a hard recommendation at Rs 8,999. However, if the price were to go lower during the upcoming festive season, you might have a decent budget deal on your hands.