The Galaxy A50s has a familiar build and is identical to the Samsung Galaxy A50 in its structure. But it can be differentiated by the design pattern and color used on the back panel. The Galaxy A50s comes with a reflective multi-color chrome finish on the back panel. There’s also a tiled design where the corners have triangles with a non-chrome color. The back of the device also houses the triple-camera setup in a vertical manner with the LED-flash below it. The Samsung logo appears in the middle and this give the smartphone a rather clean look on the back. Also Read - Samsung Galaxy A50s likely to launch in India on September 11 The smartphone has a sleek build and the right hand panel houses the volume rockers and the wakeup/Bixby key combo. There is however no dedicated power button (more on this later). The left panel only houses the SIM and the SD Card tray, and it is not a hybrid one. This means you will not have to sacrifice the SD card if you’re using two SIM cards. The top panel only has a microphone hole while the bottom one has the USB-C port along with the speaker grill, and the 3.5mm audio port.

The rear glass panel of the device melds into the metal side panels which is rounded around the corners where it meets the front panel glass. The smartphone has negligible bezels with a water-drop notch on the top which is pretty chunky. The Galaxy A50s has a slightly better screen-to-body ratio compared to the Galaxy A50, but it still has the significant bottom bezel.

Like most Samsung smartphones with Super AMOLED displays the Galaxy A50s also sports a very vibrant display. It makes colors pop with contrast and heightens them. This is more about what users prefer hence some may like the muted colors while others may enjoy a vibrant display. The corners of the display are significantly rounded which is again something that may not appeal to everyone.

There were a couple of things I noticed about the build of the smartphone when using it. The first was that a tiny piece of paper got in between the side metal panel and the front panel. And it seemed to have found a gap and just would not come out. The other was that the SIM and SD Card tray seemed to have a bad finish to it. This created a sharp edge that could be significantly felt. I am not sure if this was an issue with the unit I was using or a generic problem with the design or the production line at the Samsung factory. But it surely is unexpected on a device from one of the top brands of the world at this price point.

Before we start off with the performance of the Galaxy A50s, I must mention that there is hardly any bump in the specs of the device. Sure the processor is a generation newer Exynos, but the rest is pretty much the same. The Galaxy A50s features a 10nm Exynos 9611 octa-core processor which comes with Mali G-72 GPU. It has options for RAM and storage, and the one I reviewed features 6GB RAM and 128GB internal storage.

I am in the habit of using multiple social media apps at the same time and happen to jump from one to other frequently. The phone was able to keep up with the frequent changes in the apps, and also seemed able to remember where I left off. The delay when switching apps was negligible, and regular users should not notice the time lag. It even performed well when playing games like PUBG Mobile and other heavy games on maxed out graphics.

The OS of the smartphone is the new OneUI that Samsung launched. A regular Samsung user like me had zero issues adapting to it. I just picked up the smartphone and started using it. But even new users should not find it difficult at all to use. OneUI is positively an upgrade over the previous UI. It is cleaner and simpler as well. The phone does come with some pre-installed apps, which can be uninstalled. Moving on to the battery backup of the device, it is impressive enough and lasted me a day and a half with heavy usage. And by heavy I mean constant social media, emails, some gaming and taking photos as well. The 4,000mAh battery should last users two days with medium usage. But one thing that needs to be mentioned is the lack of the dedicated power button on the smartphone. The power button has been replaced with the Bixby button that opens Bixby on long pressing. It still turns off the screen when tapped once. And the power options have been moved completely to the top drop-down. So if you were to lose the display of the smartphone by accident, turning off the smartphone will be one of your biggest problems.

For security the Galaxy A50s comes with an in-display fingerprint sensor. Setting this up is easy, but it seems rather slow and does take a while to unlock the phone. I consistently have to keep my finger pressed on it for a while before it unlocks the phone. The face recognition is relatively faster and quickly unlocks the phone. But in terms of security and viability it definitely is less reliable than the fingerprint.

Moving on to the cameras of the Samsung Galaxy A50s, and there is definitely an improvement over its predecessor. It now features a triple-camera setup on the back with the main sensor bumped up to 48-megapixel with an f/2.0 lens along with a 8-megapixel f/2.2 ultra-wide lens, and a 5-megapixel f/2.2 depth sensor. It can capture 2k videos at 30FPS now as well. This captures some detailed shots with crisp colors in daylight. This is even true for the shots indoors that are in artificial light. It comes with a Live Focus mode that features different effects that can be added after the shot is taken. 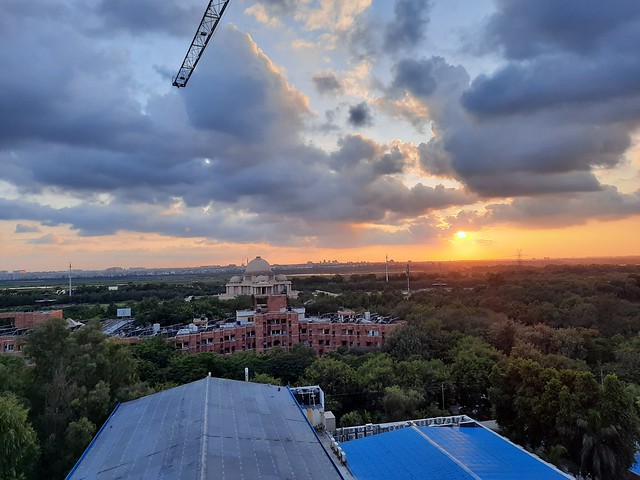 On the front end of things, it has an improved 32-megapixel f/2.0 25mm wide lens with HDR capabilities. It does soften the image a bit in artificial light, but takes crisper images in daylight. But the indoor capabilities are still appreciable for a smartphone in this price range.

Verdict: Should you buy the Samsung Galaxy A50s?

The Samsung Galaxy A50s is a well rounded smartphone. It comes with an attractive design, and has a bright and vibrant display. It has decent specs for the price which can tackle all kinds of regular usage, including gaming. The smartphone has a decent battery backup and can last more than the average smartphone under heavy usage. It has good cameras with it that capture vibrant photos, but soften them out slightly when it comes to low light selfies. And yes the retaining of the 3.5mm audio port is one of the biggest positives according to me.

On the downside, it has more bezels than I would have preferred on a smartphone in this segment. The loss of the power button is a big downside as well. Those concerned about abundant fingerprints on the rear panel may get themselves a cover for the phone. But if you want to show off that attractive rear panel then all the fingerprints will really be an eyesore. The Rs 22,999 price point over the Rs 18,490 of the Samsung Galaxy A50 with little difference in specs seems to make the latter a better choice at the moment.

In all, this is one of the better smartphones that can be purchased under the Rs 25,000 mark right now in India. And it is definitely a big improvement over the Samsung smartphones from this price segment that were available even a year back.