In 2019, Samsung has taken an aggressive approach on the competition by launching smartphones across all price segments. With the refreshed Galaxy A series, we first saw the company pushing products under Rs 20,000, and then came two more phones Galaxy A70 and Galaxy A80 for the premium mid-range segments. The South Korean technology major is yet to launch the Galaxy A80 in India, but the Galaxy A70 has been launched already at Rs 28,990, which puts it in competition with recently launched Oppo F11 Pro and Vivo V15 Pro among others. Also Read - Samsung Galaxy S22 Plus, S22 set to annoy plastic haters in 2022

The Samsung Galaxy A70‘s highlights include a 6.7-inch display and triple-rear camera setup. But one big change is the presence of a Snapdragon 675 SoC under the hood, instead of Samsung’s own Exynos chipset. The company has brought one variant in the country so far, which includes 6GB RAM and 128GB internal storage. At first, it looks like the Galaxy A50 in terms of appearance, but there is actually much more to this device, which I found out in my review. Also Read - Samsung Galaxy Z Fold3, Galaxy Z Flip3 launch on August 27? New report suggests

As mentioned, the Galaxy A70 looks a lot like the Galaxy A50 as far as the overall design is concerned. But the difference is the slightly taller 6.7-inch screen. Samsung has managed to fit in a bigger screen in the same form factor by reducing the bottom chin, hence it now gets a taller 20:9 aspect ratio with 1080 2400 pixels resolution. The Galaxy A70 uses Infinity-U panel, and then there is an optical in-display fingerprint scanner on offer. Though it is great from a design perspective, I tend to prefer physical fingerprint sensors as they are faster. Having said that, display brightness and viewing angles are great. The touch performance and response time is just like Galaxy flagship devices. In terms of design, the Galaxy A70 feels much premium than the A50 or A30. Despite having a polycarbonate body, the handset is a lot more premium than many glass offering smartphones under Rs 30,000. The phone feels lighter in hands, even though there is huge 6.7-inch display, and 4,500mAh massive battery included in the package. And when you get a big display, the single hand operation of course becomes difficult. Samsung Galaxy A70: Performance and UI

Samsung has included a Qualcomm chipset in this new A series phone instead of the Exynos processors. The Galaxy A70 packs Qualcomm’s 11nm Snapdragon 675 SoC, which is supposedly better than Qualcomm’s own Snapdragon 710 SoC. There is also 6GB of RAM, and 128GB of internal storage on offer. Additionally, there is triple slot option available which means you can use two SIM cards (Nano-SIM+Nano-SIM), and a microSD card at the same time. In my review time, I found the Galaxy A70 to be perfectly fine in terms of daily usage, multitasking and more. I didn’t encounter any stutters or reboots despite having full load on the device. Samsung’s latest OneUI adds to smoother performance, and the company has done reasonably well with the software this time around. I am not fan of their default big icon size in the OneUI, but it is still overall much better skin by Samsung than their earlier spins on Android like TouchWiz. The Galaxy A70 ships with Android 9 Pie-based OneUI out-of-the-box, just like all other Galaxy A series phones. Coming to gaming, I straight away installed PUBG to check the gameplay performance. It turns out, Samsung Galaxy A70 also runs PUBG on high-graphic settings by default, and there was very little load time. The phone does heat a little during prolonged gameplay, but doesn’t feel consistently warm. I didn’t find any frame drops or lag whatsoever. Not just heavy games, the smartphones plays out standard graphics games like Subway Surfer smoothly.

Moving on to the cameras, Samsung Galaxy A70 boasts a triple-camera module at the back. This vertically aligned setup includes a primary 32-megapixel f/1.7 aperture lens, an 8-megapixel sensor with ultra-wide (123 degree) angle camera, and a 5-megapixel depth sensor with f/2.2 aperture. In daylight condition, the rear camera shoots like a pro. It balances colors, saturation and high dynamic range (HDR) very well. While the center sharpness in all shots was up to the mark, I found it to be missing out on finer details.

Similar to camera apps on Samsung’s phones, the scene optimizer mode is also on Galaxy A70, and is pretty useful too. It works more like a preset for different situations, so keeping it on would be a great idea for any kind of shots in default ‘Photo’ mode. In case you want even better pictures, then just use Pro mode. The phone also gets an 8-megapixel 123-degrees ultra wide-angle lens, and it lets you take wider shots. Samsung has corrected the fish-eye effect issue on this phone, which I’d mentioned in my Samsung Galaxy A9 review. In low-light, the Galaxy A70 camera isn’t as impressive. During my first impressions of the phone at launch event in Thailand, I felt that camera was handling better details in low-light indoor shots, but during my review it resulted otherwise. For a decently-lit evening or night shot, the images come out nice but misses details and sharpness. But the images taken in a little dark environment or surroundings look a bit grainy Having said that, only the Pro mode could be your savior here. For selfies, the Galaxy A70 features a 32-megapixel camera on the front with f/2.0 aperture. In daylight, it makes you look great, and captures skin tone perfectly well. In ‘Live focus’ mode, which is Bokeh or blur mode, you get decent results in daylight with almost accurate edge detection. In low-light, the selfies don’t look as good as day shots, and misses on detailing as well as edge detection. Overall, I feel the camera on Galaxy A70 is quite decent, and mainly a better camera software would make it impressive, if not perfect. Checkout camera samples in the slideshow below. 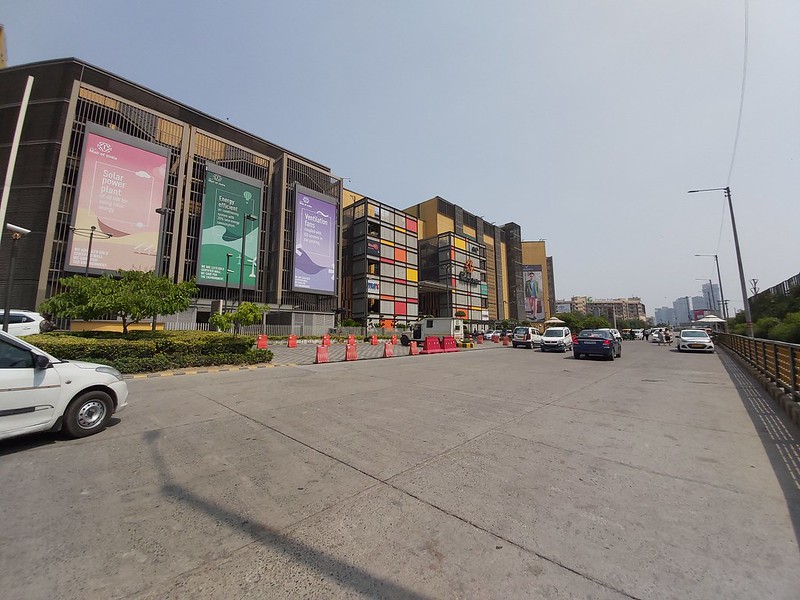 In terms of security, the Galaxy A70 gets an optical in-display fingerprint scanner which is slow and inefficient. You will be able to store up to three fingerprints on to it. Unfortunately, the software allows you to store same fingerprint three times as well, which is a bummer. For face unlock, the front-camera in the notch maps your face data. It is quite decent, but not as fast as the OnePlus’ face unlock. Also, it unlocks the phone with eyes-closed.

For power, the Galaxy A70 packs a 4,500mAh battery with support for ‘Super-Fast charging’ at 25W. What you get in the box is 25W fast charger with USB Type-C to USB Type-C cable. In terms of charging, it took approximately 1 hour 40 minutes to fully charge the phone. Also, in first 30 minutes the battery went from 0 to 40 without any major heating.

I use my phone extensively for Google Maps, social media and YouTube video streaming along with routine emails, WhatsApp messages, calls and other work. In my review time, the Galaxy A70 battery surprised me with its full day backup, and yet there was about 28 percent left in tank mostly. This is great for a smartphone with a huge 6.7-inch display.

Should you buy Samsung Galaxy A70?

The Samsung Galaxy A70 finally brings balance for Samsung phones in the mid-range segment. At Rs 28,990, the Galaxy A70 is as premium as flagship and quite powerful for the competition. It can run your daily tasks smoothly, and the processor, RAM combination works well for any kind of gaming.

For consumers interested in a big-display phone, the Galaxy A70 could be a perfect match. The taller 6.7-inch full HD+ display with tiny notch and squeezed down bottom chin is a treat for video consumption. The phone grips well in hands, and doesn’t feel too big or heavy. I found the battery to be impressive than any 5,000mAh battery phone I’ve used so far. But camera needs improvement in software department, and can be easily fixed with an update. To sum it up, the Samsung Galaxy A70 in my opinion is slightly high-priced phone, but with a perfect combination of hardware and software. If you are considering a premium Samsung phone, but don’t have big budget to spend, then you can definitely consider Galaxy A70.