The Samsung Galaxy M series shows promise and shows that the company wants to improve.

Samsung had been playing a rather lackluster game in the budget smartphone segment in India which comprises of the smartphone market priced between 7k and 13k. And by this I mean it didn’t have smartphones in this segment that could compare to its competition in terms of the specs that were being offered. But it seems like Samsung has learnt from the past and is now ready to make amends in the segment. And this is rather clear in its introduction of the new Galaxy M series smartphones with much better specs than its predecessors. We have already reviewed the Galaxy M10 in detail and found it to be an impressive offering in its segment. Now, here’s my review of the Samsung Galaxy M20 which is the higher variant between the two M Series smartphones launched so far. Also Read - Samsung Galaxy M33 5G India launch likely next month: Launch date, specifications, price and more

Design of the Samsung Galaxy M20

Right off the bat, the first aspect that anyone notices about a device is how it looks, and the Samsung Galaxy M20 shares its physical traits with affordable sibling Galaxy M10 and some of the other smartphones in this segment. It comes with a waterdrop notch like Honor 10 Lite, which has been termed as ‘Infinity-V’ and is a first for Samsung. As a matter of fact, this is the first time that the South Korean company has incorporated the notch design into its smartphones. It seems like an attempt from Samsung to incorporate itself into the segment by picking up design cues from other smartphones and pick up designs that are trending. Also Read - Samsung Galaxy S21 FE review: A flagship that was worth buying in 2021

Unlike other smartphones that are there in this category which include the Redmi Note 6 Pro, Honor 10 Lite which have metal or glass back panels, Samsung went for a polycarbonate back panel which has rounded corners to meld into the display. The back panel has the dual-camera setup in a vertical arrangement on the top left corner with the flash below it and the fingerprint sensor on down the middle. The device has two microphone openings, one on the top panel and another on the bottom beside the single speaker grille, 3.5mm port and a USB-C port. The volume rocker and the power button are on the right hand panel while the left panel houses the hybrid-SIM slot which has separate slots for two SIM cards and a MicroSD card of up to 256GB. Moving on to the display of the Galaxy M20, it features a 6.3-inch FHD+ (2340 x 1080p) PLS TFT display which is Samsung’s own technology similar to TFT. The color reproduction of the display is bright and typical of Samsung’s saturated displays, which is impressive by all means. One of the more appreciable aspects of the display is that it is quite bright and you would not have any any problem with its outdoor visibility. There were two things that surprised me, which was how light the smartphone is considering that it is packing a 5,000mAh battery and is not much heavier than the 3,300mAh packing Galaxy Note 8 which I use as my daily driver. The other thing that surprised me in terms of the design of the smartphone is how well Samsung has incorporated a proximity sensor as well as ambient sensor on the upper thin bezel, and it surprisingly works well too.

The volume rocker and the power key seems much better than the previous Samsung phones in this segment and are much more solid now without anything feeling loose. This has been typical in the mid ranged and the costlier Samsung smartphone, and the inclusion in the budget segment is an improvement of sorts for the company. The inclusion of Type-C for charging and interface with other devices is also an improvement and the fact that this comes with fast-charging capabilities also earns a thumbs up.

Booting up to the software of the Galaxy M20, I observed that Samsung has stuck to its Experience UI despite having introduced the new OneUI which has been professed as a big improvement over the previous one. Galaxy M20 does not yet have Android 9 Pie and is still stuck at Android 8.1 Oreo after the January 2019 security patch. The UI itself is no different from what we have seen in the previous Samsung devices, and we hope Samsung brings OneUI to this segment of devices as well.

Performance of the Samsung Galaxy M20

There are a few firsts for Samsung with the new Galaxy M smartphones and the inclusion of a whole new Samsung Exynos chipset in the Galaxy M20 is on of them. The Exynos 7904 processor that has been used in the Galaxy M20 is a new processor that has recently been launched by the Samsung. It is an octa-core processor which has two ARM Cortex-A73 cores clocked at 1.8GHz for high power tasks and six ARM Cortex-A53 cores clocked at 1.6GHz for the regular tasks. The processor uses Mali-G71 GPU which is efficient enough to run games like PUBG Mobile without a hitch on high graphics.

The Samsung Galaxy M20 variant which I reviewed had 4GB RAM which was capable of handling heavy apps and switching between them frequently seemed snappy and went about without a hitch. Even using apps in the split screen view didn’t seem to deter performance of the device. One of the concerns that I had was whether the background apps are killed after a while, and it seems that it usually takes a long while before the app is killed and only an iteration is there in the background apps. I noticed that the smartphone produced negligible heat when playing games like Asphalt and PUBG Mobile even at longer stretches which is definitely one of the bigger positives considering how important smartphone gaming has become.

Moving on to the battery performance of the Samsung Galaxy M20, it has been impressive to say the least. I will mention outright that generally I am not too heavy a smartphone user and in my regular medium use of the smartphone, it easily lasted 1.5 days with a single full charge. This includes a couple of PUBG matches a day, a couple of product shots, 30-40 minutes of streaming high quality video, browsing social media for the rest of the day. But to test out the extended battery capability of the device, I extended the usage and the gaming hours to match heavy usage and the battery still lasted about a day on a single charge. Now coming to the Galaxy M20’s camera capabilities, I have to admit that I had expected much better results considering that Samsung excels in optics. It is one of the primary talking points of its higher end smartphones, the company never ceases to surprise me with its below-par optics in the budget segment. The daylight shots seem perfectly fine which is expected, but the quality deteriorates as the light intensity decreases and so does capturing correct colors. The rear-camera combo of 13 megapixel primary sensor with a lens of f/1.9 aperture and a secondary 5-megapixel sensor and 120 degree field of view lens. The front camera is not too better off and the software has a tendency to overexpose the background in bright light to adjust the skin tone, while in low light it has difficulty in maintaining accuracy. 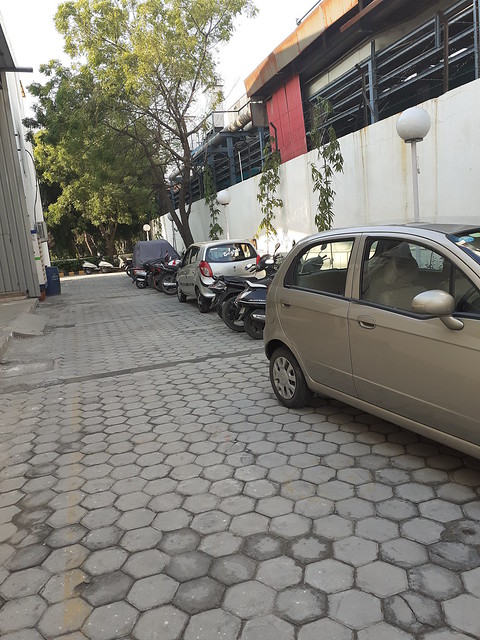 The software integration of the Face Unlock is pretty accurate (slightly slow), but definitely better than the Galaxy M10. The fingerprint sensor is pretty snappy and seems at par with even costlier devices.

The Samsung Galaxy M20 is a definite improvement over the previous Galaxy On series and Galaxy J series smartphones that we have seen. It shows that Samsung is willing to move towards making better phones for the budget segment, even though it has not reached there yet. The Galaxy M20 has impressive battery backup and the great display with performance which is quite up to the mark. But one of Samsung’s old faults of not incorporating better camera modules persists, considering the competing brands excel in the camera department especially.

In terms of the pricing, the variant I reviewed with 4GB RAM and 64GB internal storage is priced at Rs 12,990 which seems like fair pricing for the device even when comparing its positives and negatives to smartphones like the Xiaomi Redmi Note 6 Pro and Asus ZenFone Max Pro M2.