The recently launched Samsung Galaxy M31 is the direct successor to the Galaxy M30s. So how big a change does it bring? Check out our review.

The Galaxy M series has been an attempt by Samsung to make its mark in the highly competitive budget segment. After launching the Galaxy M30s in September last year, Samsung has now launched its successor. This new device is the Samsung Galaxy M31. It comes in two variants. The base model (6GB+64GB) costs Rs 15,999, while the top model (6GB+128GB) costs Rs 16,999. I’ve been using the smartphone for quite sometime now, and here’s my Samsung Galaxy M31 review. Also Read - Samsung Galaxy S20+ First Impressions: A promising upgrade?

In terms of design, the Samsung Galaxy M31 has not changed much. The front panel has just as much bezels as it did the last time around. Even the back panel has a similar look and feel as the Galaxy M30s. The one visible difference though is the larger camera module on the back. This has been done to accommodate the extra camera sensor. The right hand panel features the volume rocker along with the power button. The left panel has the SIM and SD card tray. And the bottom panel holds the Type-C charging port along with the speaker grille and the 3.5mm audio port. Also Read - Samsung Galaxy M31 launched in India at Rs 15,999: Price, specs and features

The back panel of the device is made from plastic. While it keeps the weight in check, it is a fingerprint magnet and tends to scratch easily. To keep the phone’s look intact, it is advisable to use a case. The Galaxy M31 features a 6.4-inch FHD+ Super AMOLED Infinity-U which has been retained from the previous version. The display has a slightly higher screen-to-body ratio, than last time. It is bright enough to be easily visible even when out in the sun. Also Read - Samsung Galaxy M30 Review: Long battery life, triple camera setup, amazing display Moving on to the performance bit, and the Samsung Galaxy M31 is powered by an Exynos 9611 SoC. It also runs Android 10 out-of-the-box. The OS is wrapped under the company’s own OneUI. The smartphone’s 6GB RAM does the job it is supposed to and can retain the different apps and where they were left off. But with time it does tend to kill some of the heavier apps. Gaming on the device is the real test to assess how it performs. It held up well in my sessions of playing Call of Duty: Mobile, but only after the settings were turned down to ‘Mid’, because ‘High’ settings kept tripping up an FPS loss. It did heat up a bit during extended sessions of play as well. The Galaxy M31 is backed by a large 6,000mAh battery with support for 15W fast charging. And true to Samsung’s claims, the smartphone does hold up a long time after a full session of charging. The device easily lasts you two days with heavy usage that includes checking social media every waking hour and some extensive gaming sessions as well. It also includes some intermittent video viewing on YouTube as well. But what is somewhat disappointing here is that the charging speed of the smartphone is not what its competitors are offering. The phone takes a while to say the least to fully juice up. If the battery levels fall under 10 percent, then it takes about two hours to get charged back up to 100 percent. And this while using the 15W Fast Charger provided in the box.

The device has support for a microSD card, which can be used to expand the internal memory. The fingerprint sensor on the Galaxy M31 is placed in the same area as it was on the Galaxy M30s.

Moving on to the camera department, and the Samsung Galaxy M31 now features a quad-camera setup. This includes a 64-megapixel primary camera with f/1.8 aperture. The three other sensors on the device include an 8-megapixel wide-angle camera, a 5-megapixel depth camera, and another 5-megapixel macro lens. On the front end of things it features a 32-megapixel selfie camera with f/2.0 aperture, which is an upgrade over the 16-megapixel one in the previous version. The camera does well for this price segment in brightly lit conditions, but it struggles in low light settings. The colors are reproduced well but it seems to wash out in low light, hence your club selfies may not show the correct red of your dress. In bright light the detail in the photos are noticeable. But these seem to diminish somewhat in the wide-angle mode photos. The artificial depth created using the cameras are just about fine, and the edges are not perfectly reproduced. 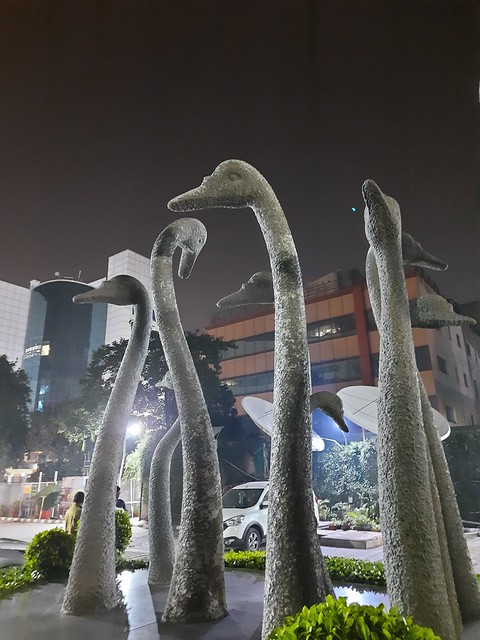 The other big addition this time around on the Galaxy M31 is the 4K 30FPS video recording which was not previously present in the budget segment phones from Samsung. Though this creates large files the quality on these can only be noticed if someone had a 4K display to play this back on. The front camera inside the water-drop notch produces pictures with marginally better details in them, but not enough to be noticeable on the phone display. This difference would also become moot when the photos from the front cam are posted on social media.

Should you buy the Samsung Galaxy M31?

Samsung has kept a lot of the things same on the Galaxy M31 when compared to it predecessor the Galaxy M30s. In fact there are only a few differences in the two phones to begin with. The new smartphone has an upgraded camera with a new 4k video recording feature. The base variant now has 6GB RAM instead of the 4GB of the previous generation. Apart from this the battery backup of the device is just as reliable as before.

But it all comes down to the fact that the previous generation of the smartphone is Rs 2,000 cheaper than this one and people buying that right now would not miss out on much. But those that feel that the extra camera and the 4K recording are something they need then they should definitely go for the Samsung Galaxy M31.