This year, Samsung launched the Galaxy S20 FE as its next best offering in the bouquet of premium S20 series of smartphones but with an affordable price tag. While offering comparable specs to a flagship, the Samsung Galaxy S20 FE was introduced in September as a ‘Fan Edition’ smartphone especially made for fans. The handset is essentially a slightly toned-down version of the Galaxy S20 in a more affordable package. Also Read - Samsung Galaxy F42 India launch tomorrow: What's confirmed, what could be the price?

In India, Samsung initially launched one variant of the phone with 8GB RAM and 128GB storage for Rs 49,999. Later, the company added 256GB variant as well, at a retail price of Rs 53,999. The difference between the Indian retail unit and the global variant is its processor. I got a chance to use the base model of Exynos-powered S20 FE without the 5G, and here’s my long-term review. Also Read - Samsung Galaxy M52 5G launched in India with price starting at Rs 29,999: Check specs, sale date

Starting with the design, the S20 FE looks quite identical to its siblings except it has a flat display and a matte-finished polycarbonate back. In comparison to the S20+, this one is slightly compact and weighs a little less. The ploybcarbonate back does feel nice to hold and doesn’t attract fingerprint/ smudges. But on the contrary, the display isn’t as good as the S20 series of phones. Both these put together, make the S20 FE a lot less premium compared to S20 or S20+. Also Read - Samsung Galaxy M52 5G launch on Amazon today: Check expected specs, price in India

Talking about the display, Samsung has packed a 6.5-inch full-HD+ 120Hz Super AMOLED screen which is not as good as the QHD+ panel you get in S20 series of phones. That said, as a standalone product, I don’t have much to complain. The panel is still good, and offers bright and vivid colors. Samsung is known for its best-in-class display panels. There is Widevine L1 support, which means you’ll be able to watch full-HD videos on Netflix and Amazon Prime Video.

Overall, the S20 FE is a well-built smartphone despite having the polycarbonate back. It offers a good screen-to-body ratio with a decent display in a lightweight package. Strangely, Samsung doesn’t provide a protective case with this phone, but it was okay with me to not use the back case because I never felt the need of it. The phone never felt delicate, and my White color review unit of S20 FE had an amazing matte-finish which didn’t attract smudges at all. One of the reason, the S20 FE has earned high praise globally because it offers Qualcomm Snapdragon 865 and 5G at an affordable price tag. But for India, it’s a bummer because you don’t get any of it. The Samsung Galaxy S20 FE India unit ships with company’s own Exynos 990 chipset, just like all the flagship S20 models. This again doesn’t offer 5G and you get two variants with 8GB RAM and 128GB or 256GB internal storage. Our review unit had 128GB storage, and It was just about okay. I have said this in my other S20 reviews, the Exynos chipset feels okay at multitasking and the real-world performance doesn’t really show any signs of lag. But where it struggles, is while keeping the overheat in-check especially during heavy-graphic gameplay. Also, the phone does heat randomly while clicking pictures and videos. Coming to the UI, the S20 FE runs Samsung’s latest OneUI 2.5 based on Android 10. Over the years, Samsung has steadily improved upon the interface. In my opinion, it is one of the best after the stock Android and OxygenOS overlay. When it comes to picture quality, I found that the triple-rear camera setup does a fairly good job in day-light conditions. The binned output from the 12-megapixel sensor maintains richness of colors. All the results had adequate amount of detailing and sharpness, as expected. The AI scene optimizer keeps the contrast levels along with very little color saturation. The HDR shots also look good from S20 FE camera. Coming to the low-light shots, the rear camera setup lacks sharpness and the images doesn’t look as impressive. I could see visible amount of noise in almost all images. That said, the Night mode is still a savior on the S20 FE. The processed images does look a little sharper and more pleasing to the eye than the normal low-light shots. Talking about the video recording, the phone supports up to 4K at 60fps in 16:9 aspect ratio. You can also shoot 4K 21:9 videos at 60fps in Pro mode. The S20+ on the other hand, could shoot up to 8K videos.

On the other hand, the front camera is an upgrade on this phone. For selfies, the Galaxy S20 FE comes with a 32-megapixel camera instead of a 10-megapixel seen on S20 series. While I didn’t like the selfie camera on the S20, I think S20 FE gets a better front camera. The images clicked from 32-megapixel lens look more detailed and crisp. Samsung by default enables beauty mode for selfies, but you can turn it off for better results. Check camera samples below (slideshow). 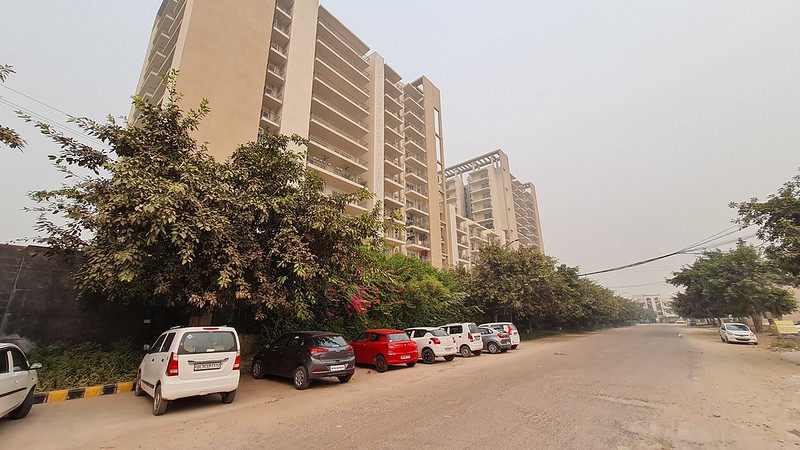 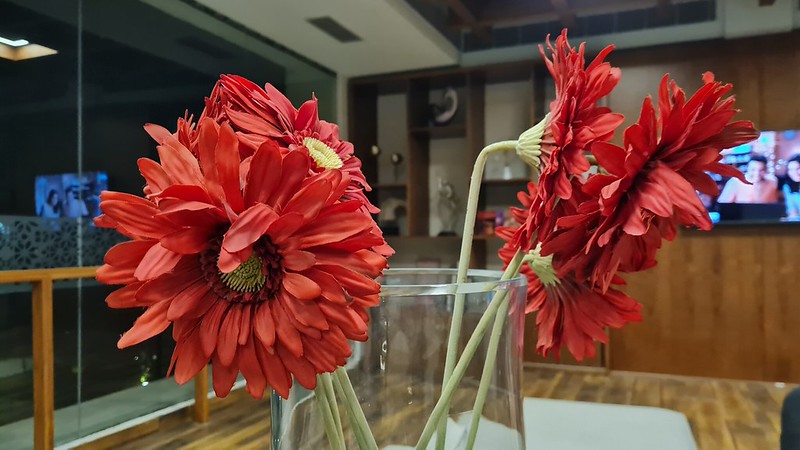 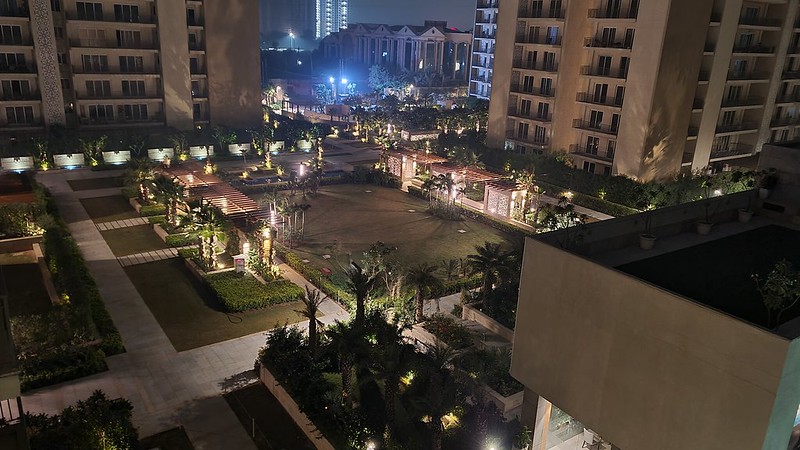 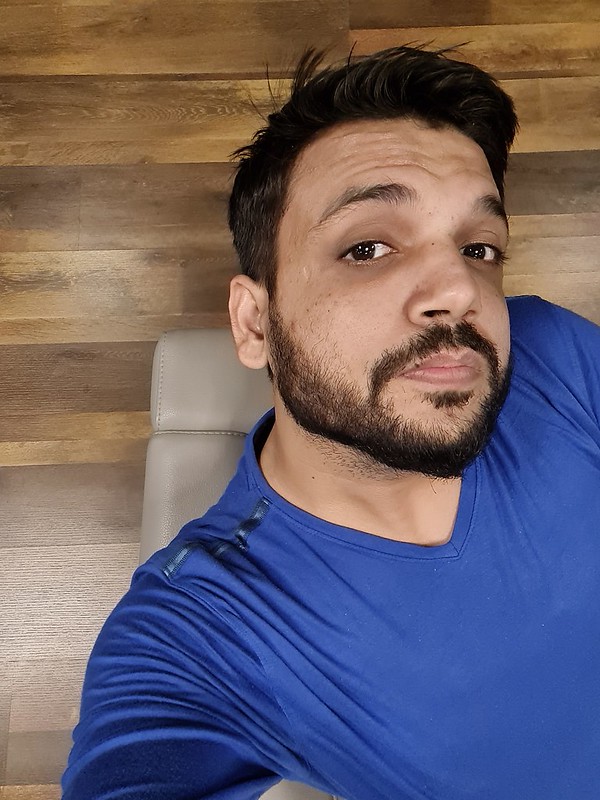 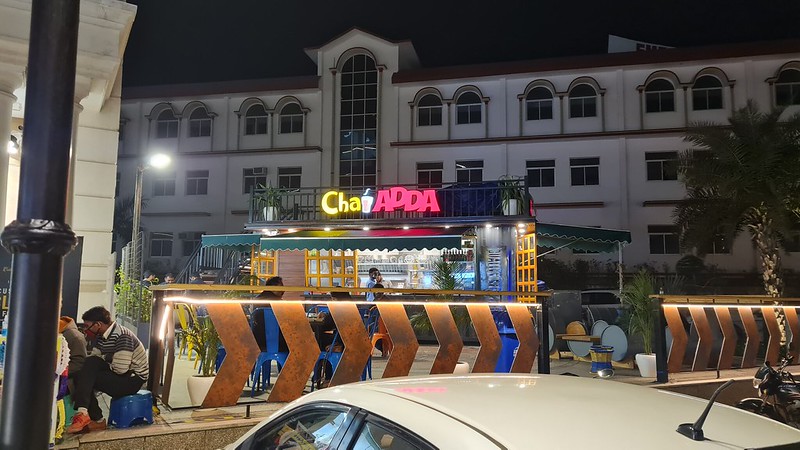 As I had written in my Galaxy S20+ review, Samsung did improve upon the Fingerprint scanner and Face Unlock features from its own last generation of phones, and similar is the case with the S20 FE. Both these security features work fine, but only if you do not compare it to any flagship phone. In my opinion, these are still not as fast as one would expect in 2020. Honestly, the face unlock on all Samsung phones work exactly the same, and this is one of the thing Samsung should work on. In case of S20 FE, I felt the fingerprint scanner lacked big time as well and it failed to recognize/ unlock many a times. Coming to the battery and charging, the S20 FE comes backed by a 4500mAh battery with support for 25W fast charging. Samsung has retained the WPC Qi wireless fast charging support and reverse Wireless PowerShare feature. But unfortunately, the company couldn’t retain a 25W fast charging adapter in the box. Instead, you get a 15W two-pin charger and USB Type-C to USB Type-C charging cable. I wonder why Samsung didn’t feel the need of a 25W charger, because clearly the phone takes a long time to charge otherwise. Also, the battery struggles to last one full day. I mostly needed to charge it up mid-way. The 120Hz panel settings consumes a lot more battery than expected.

The S20 FE might be the next best offering by Samsung globally, but unfortunately it is not for India, due to its high price and lack of support for 5G. At Rs 49,999, the smartphone competes with much-superior OnePlus 8T or Xiaomi Mi 10T Pro in its segment. Both these phones come a lower price point and offer a better value for money than the S20 FE. Samsung’s decision to leave out 5G support and Snapdragon 865 is the primary reason that this phone doesn’t look lucrative enough for its price in the country. Also, during the festive season, the S20+ got very affordable and went head-to-head with S20 FE at Rs 49,999, which made it impossible to recommend over the flagship. That said, the S20 FE is still a good looking device with decent cameras and display. If you can look past the competition and 5G support, then it does offer competitive specs for a premium smartphone. Currently, the phone is expensive for its price, but in case you get it somewhere close to 40K, then you can definitely consider.