An upgrade to the Galaxy S20 FE, the phone inherits some of the premium features from its older sibling- the Galaxy S21, but is it the right time to purchase it? Samsung opened its 2022 innings in India with the Galaxy S21 FE that was due to launch last year. An upgrade to the Galaxy S20 FE, the phone inherits some of the premium features from its older sibling- the Galaxy S21. The device rings all the bells and whistles when it comes to internals. But with almost a year’s delay and with new batch of handsets almost ready to fill up the inventory soon, the question arises as to whether the Galaxy S21 FE would offer the best bang for the buck, especially at this time when the eyes are glued to Galaxy S22 launch. We find out in our review. Also Read - Samsung Galaxy M53 5G, Galaxy M33 5G Emerald Brown color launched in India

At first glance, the Galaxy S21 FE felt more like holding its premium sibling — Galaxy S21. However, it embraces a simplistic design rather than boasting flashy chrome. Moreover, it doesn’t feel heavy, courtesy of the all-plastic body. The camera strip blends seamlessly to the sides of the phone. The camera island is slightly protruded but it’s in no way comparable to those big bullet eyes. Also Read - Samsung Galaxy Z Flip 4 spotted on Geekbench, reveals Snapdragon 8 Gen 1+ SoC The metal chassis takes the load off of the necessary ports and tangible keys. Ergonomically, the phone feels good, and one can easily carry out tasks on a single hand. The sleek profile and lightweight add to the brownie points, but we would have preferred a cover case packed with the handset, as the device fell off thrice (didn’t register any major damage or dent though) because of the slippery frame.

The advantage of having a Samsung phone is the crisp and vibrant AMOLED panel that renders brilliant details throughout frames and pixels. The Galaxy S21 FE gets a similar treatment as the flagship lineup. The display uses the proprietary Dynamic AMOLED technology, meaning you get vivid colours, deep blacks, all that is required to enjoy content on a smartphone screen. The panel has FHD+ resolution and supports a 120Hz refresh rate. While the content looks sharp, and a high refresh rate delivers a smooth scrolling experience, the drawback of the S21 FE is that it doesn’t have an adaptive refresh rate that greatly impacts the battery performance. Although you get the option to swap it to 60Hz, that’s a manual task. On the brighter side, you get a widescreen with brilliant touch response. Speaking of touch response, we found the fingerprint reader to be quite accurate most of the time, though it’s an optical sensor and not ultrasonic. There’s facial recognition that plays the side role. It took months for the mid-ranger to fly downtown and get customs clearance (just a quip), and the result, its old coat could barely save it from the cold winter. The phone equips near one-year-old flagship silicon which in no way is a downer, but with new batch (with the latest chip) getting packed, sealed, and is ready to be put in the next cargo ship, the oldie has got big shoes to fill. Besides, the phone doesn’t have a microSD slot, which is another disappointment that you will have to swallow. Talk about real-world usage, switching back and forth apps, using multiple tabs in the browser, we didn’t face any issue. The performance was fluid across activities, and we could easily run graphics-heavy games without any hiccups.  The phone had a good report card in benchmark tests, too. For your perusal, we have put the screenshots of the major tests below. Although the old chipset and the missing microSD slot take down two stars from the goody badge, the latest Android software makes up for the lost part. The Galaxy S21 FE gets Android 12 pre-installed with Samsung’s updated One UI 4.0 interface skinned on top. The interface looks clean with tons of customization and revamped Widgets. Privacy features introduced on Android 12 could be seen applied on the interface, especially in the camera. In addition, system colour sync with wallpaper gives a personalized experience. An added benefit on the software front — up to three years of promised software upgrade which means Galaxy S21 FE owners will get up to Android 15 which is a sweet deal. It seems Samsung wasn’t that excited to work on the S20 FE successor as it was the previous generation flagship series. While the Galaxy S21 FE imitates the premium S21’s design, the triple camera setup has been borrowed from S20 FE. The end results in daylighting condition are pretty good, although green and blue appear to be a bit oversaturated. The ultra-wide lens captures enough detail, although distortion is visible around the edges. The telephoto lens supports a 30x Space Zoom feature, which we would recommend using for birdwatching rather than shooting stills. The phone also offers a Portrait mode that nicely separates the subject from the background. As for low-light shots, we got mixed results. The hairline details were missing, and we could observe a visible amount of noise in most images. The Night mode adds sharpness to an extent and makes it a bit presentable. The selfie camera renders muted pictures. Although the photos appear bright and colours look accurate, the software tends to brighten to image and smoothen it losing out on details around the sides. 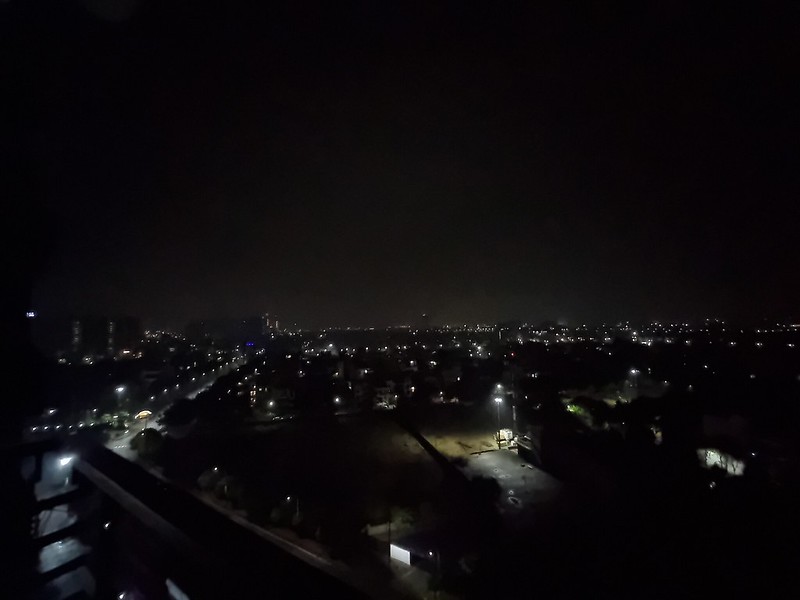 Even the battery pack and charging capability are the same as the Galaxy S20 FE. The 4,500mAh battery pack provides decent performance on moderate usage. Gaming for extended sessions kills the battery quickly. During our usage, we could get about 6 to 6 and a half hours’ worth of juice with a high refresh rate turned on. As with many premium smartphones these days, the S21 FE follows the suite of ditching the bundled charger. Hence, we couldn’t record the phone’s battery charge time. The Galaxy S21 FE completes the S21 series package, bringing top-of-the-line features for a decent price. The phone’s solid performance, bright and crisp display, over three years guaranteed software upgrade is its biggest USP. But Samsung brought the device at a time when everybody is waiting to see the upgraded models. Although the OnePlus 9RT launch in India saves the tech brand from tener la culpa to a degree, but there are a few tradeoffs that one needs to consider before making the purchase decision. The MRP along with bank offer might appear to be a reasonable deal if one is to compare with other flagships, however, the absence of in-box accessories (especially the charger) adds up to that extra amount. Moreover, the phone doesn’t include a microSD slot, hence if you want the 256GB variant, the budget exceeds the 50k limit which is as close to paying for the flagship S21 smartphone. In a nutshell, the Galaxy S21 FE is a solid phone that would have set a tough competition had it been launched last year. There are better options coming in, but if you still want to purchase it, we would recommend waiting for a price drop.