Vivo V17 launching in India is remarkably different from the one available in China. It lacks the diamond camera setup but offers faster Snapdragon 675. Is that enough to compete in this crowded market? Vivo has sprung a surprise in the Indian smartphone market. Amidst Realme’s stunning rise in the table, Vivo has held on to its number three position in the market. While it was anticipated to lose the spot, the Chinese smartphone maker is on target to beat Samsung to become the second major smartphone brand in the country. Its rise is mainly driven by demand for Y-Series in the offline market, strong response for U-series in the online market and ability to show tech prowess with the V-series. Its newest device in this V-series is called Vivo V17 and it’s still big focus is to put better cameras in your hand. Also Read - Vivo V17 with punch-hole display, quad rear cameras and Snapdragon 675 launched in India: Price, Availability and Specifications

Vivo V17 has been expected to launch in India for some time. The company launched V17 Pro with dual pop-up selfie camera in September. Three months later, the V17 comes with a punch-hole display, a quad rear camera setup that lacks a telephoto sensor and a lower price tag. With Vivo V17, the company is looking at offering a device that tries to balance between performance, imaging and design. So, is this the new holy grail for mid-range smartphones in the country? Well, we will be able to answer that question in our full review. But, we came away quite impressed with the initial few hours spent with the device. Also Read - Vivo U20 sale on Amazon India and Vivo e-shop; Price, specifications, offers, and more Vivo V17 launching in India is remarkably different from the one announced in China last month. The striking difference is the lack of diamond-shaped camera module on the back. The Vivo V17 launched today comes with four cameras on the back but they are stacked in a rectangular layout. There are three cameras that sit below each other on the top left corner while a parallel strip has another sensor and LED flash unit. The camera setup itself is enclosed in a metallic enclosure that strikes whether you get the glacier ice or black color variant. 2019 started as a year when smartphones with pop-up cameras arrived left, right and center. However, we are closing the year with punch-hole display devices. Take a look at the Infinix S5 Lite, the cheapest smartphone with punch hole camera setup. Vivo V17 also has a punch hole camera located at the right-hand side of the device. Somehow I think that punch hole is a smarter solution to need for full-screen devices than pop-up cameras. It eliminates complexity and shows how displays can be repurposed for a modern design. The punch hole on the Vivo V17 is smaller than the one seen on Samsung‘s Galaxy flagships. This also helps to further trim bezels on three sides. The chin is still big and only hindrance to truly full-screen device.

Vivo V17 has a large 6.44-inch Super AMOLED display with Full HD+ resolution. At 2400 x 1080 pixels, it offers an aspect ratio of 20:9, which is taller than 19:9 but shorter than 21:9 cinema aspect ratio adopted by Motorola. In my limited time, I found the display to be in the same league as other devices in this price segment. Vivo’s color profile has always been different where screen can be little vivid than natural. I could not see any discoloration or tinge during the brief period with the device. Overall, the display is good for this price segment and even comes with an in-display fingerprint sensor embedded underneath it. Vivo recently launched the U20 on Amazon India as the cheapest smartphone with Qualcomm Snapdragon 675 mobile platform. You get the same mobile chipset on the Vivo V17 as well. The octa-core mobile processor is fabricated using an efficient 11nm process and has two Kyro 460 Gold cores for performance clocked at 2.0GHz. The chipset seems like a better option than the Kyro 260-based Snapdragon 665 SoC. We will have more detailed look at the SD675 and SD665 in our full review but it would be fair to say that the chip is a proven one.

We have seen the Snapdragon 675 even on Xiaomi Redmi Note 7 Pro, which was among the best mid-range device until the launch of Redmi Note 8 series. Our review unit comes with 8GB RAM and 128GB storage, which is ample for a really smooth device in this segment. It runs Funtouch OS 9.2 based on Android Pie with features like system-wide dark mode. Vivo tells me that they will reveal Android 10 upgrade details in the next few weeks. Vivo V-series have always been about its cameras from the earliest days of models like the V3 and V3 Max. The V17 only takes the camera-centric ideology a step further. 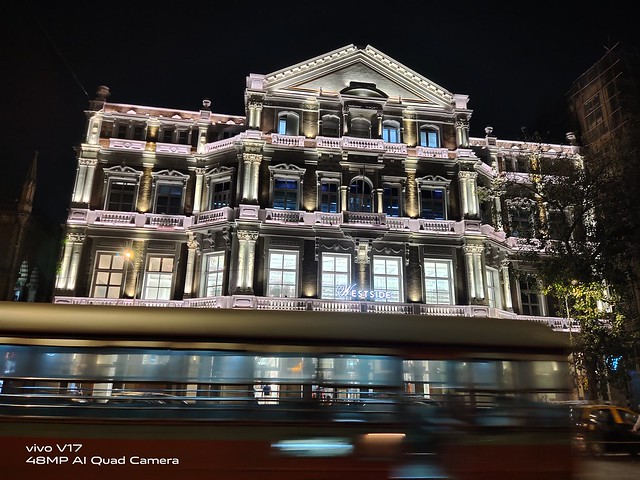 Most of the time, we limit the use of ultra wide-angle camera to landscape but trying out people is equally fun. Another area where Vivo has improved the camera with night mode. It borrows a lot from Pixel’s Night Sight and shoots with low ISO and does not open the shutter for really long duration. When Google launched the Pixel 3 with Night Sight last year, it was way ahead of what it’s competitors could do. However, a year later, every other smartphone maker has caught up in a big way. Even your budget and mid-range smartphones can capture decent pictures in low-light. In the review, we will have more insight on the versatility of this quad camera system. There is also a 32-megapixel selfie camera placed inside the punch hole. It also does low-light mode, which is remarkable. In my brief time with the Vivo V17, my takeaway has been quite simple. You can get acceptable hardware in the sub-Rs 20,000 price segment without any issue. You also get a very good design, solid build and an in-display fingerprint sensor. The decision about which phone to buy totally rests on the camera setup. In the case of Vivo V17, there are a total of five cameras and all serve a distinct purpose. The main 48-megapixel camera is great with daylight while the 8-megapixel ultra wide-angle camera lets you try new composition. There are also two 2-megapixel cameras for depth and macro.

The selfie is another area where Vivo has always been strong and V17 seems no different. But there are other smartphones from brands like Oppo, Realme, Xiaomi and Samsung that offer similar camera setup. It is impossible to judge whether Vivo V17 is better than the rest in just one day. But, it is one strong device from the brand that has been making waves in the Indian market for the last few quarters. If it continues to keep devices like these rolling then there is a possibility that it will beat Samsung to become the second major smartphone brand sooner than later.