Vivo Z1x Review: A well rounded device for the price

Vivo Z1x Review: A well rounded device for the price

The Vivo Z1x smartphone is the latest smartphone from the Chinese company to take on the budget gaming segment but with some other enhancements as well. Here's my review. The Chinese smartphone company Vivo has had a steady stream of devices in the past few years. In recent months, we’ve seen many of them geared towards the gaming community. With the new Vivo Z1x, the company wants to continue its focus on the budget gaming streak, while offering some essential improvements. Hence it offers some improved specs over its predecessor, which is set to make it a more rounded smartphone. The Vivo Z1x will be offered in two variants. The 6GB RAM + 64GB storage model of the Vivo Z1x costs Rs 16,990. The 6GB RAM + 128GB storage configuration will be available for Rs 18,990. At this price range, the Vivo smartphone is a great competitor to the Realme 5 Pro. I have been using the device as my primary phone for the last couple of weeks, and here’s my review. In terms of looks, the Vivo Z1x comes with a dual-tone chrome rear panel made of plastic, but the feel of glass. It has a triple-rear camera setup on the top corner, with the flash below it. The logo is located on the bottom half. The front panel of the smartphone comes with a bright, tall 6.38-inch Full HD+ Super AMOLED display. The display flaunts a waterdrop-style notched display. It almost has no bezels, if you overlook the slight chin.

The front and back panels form a bump with the side-panels. The panel on the right comes with power and volume rocker buttons on the right panel while the left-hand panel houses the dual-SIM cards and the Smart Button. The bottom panel houses the speaker grille, the Type-C port, and the 3.5mm audio port (this is a win for me). There are no interactive spaces on the top panel, but only a microphone hole.

The bright AMOLED display offers vibrant color that effectively highlights games. A higher contrast makes it easier for gamers to spot enemies in tough spots. Besides, this is great for consuming media on the smartphone, and is quite good for a smartphone in this price segment.

In terms of its user interface, the Vivo Z1x uses the proprietary FunTouch 9.1 OS on top of Android 9 Pie. In terms of design philosophy, it’s similar to iOS. In fact, very often seems highly ‘inspired’ by it. This means that there is no app drawer with app icons on the home screen itself. You can access notifications by swiping down from the top of the screen. Similarly, you can access Quick Settings via a bottom pull-up menu. This may take some getting used to for those that are unfamiliar with it. iPhone users would this familiar territory.

Personally, I’ve always preferred an app drawer, but that’s a very subjective preference. The default app icons are colorful ones and geometric in shape. You can change this by downloading various UI themes.

This is where the Vivo Z1x shines through. The smartphone is impressive when it comes to performance, thanks to its upgraded 10-nm Snapdragon 712 SoC. Along with the new Adreno 616 GPU processor for optimum gaming performance, there’s much to look forward to in this device. I reviewed the 6GB RAM variant with 128GB storage, and it performed seamlessly without any bugs. However, on occasions, it does slow down marginally while reloading apps. I’ve observed this is the case only with certain heavier ones.

In terms of the battery it is slightly lower than the previous 5,000mAh of the Vivo Z1 Pro. The 4,500mAh battery of the smartphone lasts well for a day of rather heavy use with media and gaming. It’s slightly surprising that Vivo reduced the battery capacity despite using an AMOLED display. Medium and low usage will get the users through more than a day on the smartphone. One major improvement is the use of a 22.5w fast charger, which is new for this segment. This chargers the smartphone rather quickly, making it efficient and better than before. Gaming plays a vital role in the the smartphone experience, and the inclusion of an Ultra Game Mode and Esports Mode underscores this further. This Ultra Game and Esports mode helps players access options to smooth out the overall gaming experience.  I tried out FIFA Mobile, PUBG Mobile, Asphalt 9: Legends and Modern Combat 5 on it and all the games ran perfectly. PUBG Mobile ran on the highest possible settings and I observed marginal signs of heating on after about 30 minutes of game play.

The smartphone didn’t lag or stutter at all when playing the games. It even maintained a steady FPS for smooth gameplay. The Esports mode unlocks the chip so players can push the smartphone to full performance without worrying about the heat. This is an appreciable feature on the smartphone of this segment.

This again is a hit for the Vivo Z1x. The photography which was just up to the common standards back in the Z1 Pro, has improved by leaps and bounds here. The Vivo Z1x features an upgraded 48-megapixel sensor on the rear that captures some photos with good detail in them. These photos are clear and crisp in the colors. These colors are bright and accurate which is quite the rarity in smartphones of this price segment. The 48-megapixel Sony primary snapper with f/1.79 aperture comes with another 8-megapixel secondary shooter (wide-angle), and a 2-megapixel depth sensor. This combination takes impressive photos in bright light and even has the capability to take some good photos in low light. The front 32-megapixel camera is also a great improvement with excellent clarity and added depth. Though this depth is added in the software bit of the processing, it is quite accurate even around the stray hair. Low-light selfies are a challenge, but it still has better results than the other Vivo phones of this segment. 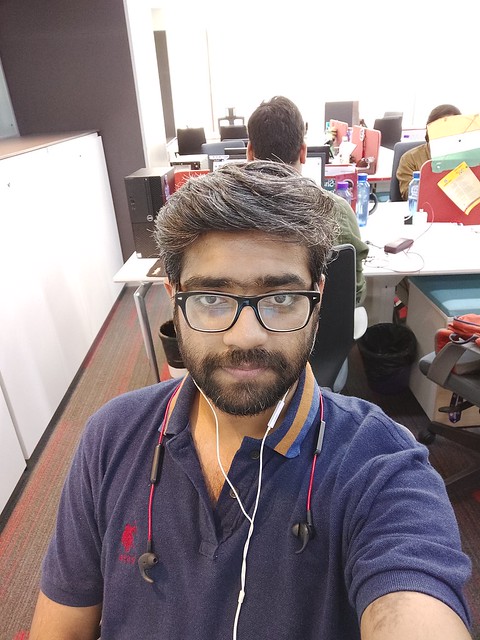 Should you buy the Vivo Z1x?

Like I mentioned in the title, the Vivo Z1x is an all-rounder for this sub-20000 price segment. It has a solid physical build with a mostly accurate fingerprint-sensor. A great display, which is hard to find in this segment. It has excellent performance, both gaming and otherwise. Its battery performance is more than acceptable, which is another notch in the positive side. To top it off, it has surprisingly good cameras that can top most other smartphones in this segment. I would say this many positives point to the fact that this is a recommendable smartphone to buy.