Starting at Rs 29,999, the Mi 11X is currently the most affordable phone with the Snapdragon 870 chip. The 120Hz AMOLED display and a pretty design are other bonuses.

Xiaomi’s venture into the premium arena is well known. The company, with the launch of the Mi 10 lineup came up with intriguing propositions last year and the same expedition continues. Except, it is based on the very ideology the company has been following since its inception: high-end specifics at a low-end price tag. Also Read - Xiaomi Mi Watch Revolve Active India launch date revealed: When's the launch?

Such is the case with the company’s new offspring, the Mi 11X, born into the new Mi X family. The phone looks like a capable contender for under 30K with a mixture of 5G futureproofing, a high refresh rate, fast charging, a premium chip, a noteworthy design, and loads of enticing features. A lot on the plate, which raises the eagerness to see how the device is like and if it’s a good buy for under Rs 30,000. Also Read - OnePlus Nord CE vs Redmi Note 10 Pro Max: Does 4G still outdo 5G at a lesser price?

The way Xiaomi has been making phones these days is a reflection of the kind of attention and energy it is putting. The Mi 11X is one of the specimens. While the phone has been cut from the same design cloth as the Mi 11 and even the Redmi K40, there isn’t a reason to complain, for we do get a good-looking chassis. Our unit is hued in ‘Cosmic Black,’ which fulfils the need for a basic yet appealing phone. Other colour options include Celestial Silver and Lunar White. Also Read - Xiaomi is hiding the front camera on its next Mi flagship smartphone Then the element of premium is the Halo Ring that surrounds the main camera housing at the back. As mentioned in my first impressions article, the phone might not have given us something different to gaze upon but what we get is worth flaunting.

But, the show-off can go a bit awry as the phone (apart from attracting attention) attracts dust and smudges. And, this is a recurring thing; you will often find dust particles and your fingerprints staying put at the back. Hence, I would recommend using the case, given that you get one for free. Two more elements that make the device an attractive one are it’s more than decent build quality and lightweight. The phone feels comfortable for one-hand usage, long gameplays, binge-watching videos, and more. Although, this can be inconvenient while lying down but you will come along.

The Mi 11X goes for the ‘simple yet classy’ motto and it feels so too. This is quite likeable and has the capability to appeal to many.

The punch-hole display spans 6.67-inch and supports a Full HD+ screen resolution, a 120Hz refresh rate, peak brightness of 1,300 nits: all based on an AMOLED panel. Feels like an opt combo! Reality says so too. The Mi 11X calls for a vivid viewing experience. Binge-watching for long hours hasn’t been a problem as the shows/movies/YouTube videos always feel good to look at. There is a decent amount of details. The colour reproduction does bend towards a saturated output (much like Redmi Note 10 Pro) but it isn’t anything prominent. The 120Hz refresh rate ensures a buttery smooth usage.

While the phone has a peak brightness of 1,300 nits, it still fails to be utterly bright even when the full level is attained. This hampers the usage under the sun to an extent and I would have liked it if the phone didn’t lack in this aspect. Having said that, it doesn’t mean that the display isn’t bright; it just fails to match with the numbers.

The device houses three rear cameras: a 48-megapixel main camera, an 8-megapixel ultra-wide lens, and a 5-megapixel macro lens. The front camera stands at 20-megapixel. There are a number of camera features such as the Portrait mode, Night mode (for both front and rear cameras), 4K videos at 30fps, Beauty mode, Vlog mode, Tilt-Shift, and more. All in all, you get a lot of things to try out if you like using the camera app quite often. Xiaomi has put in efforts in the cameras too. The result of which is a decently tuned camera department. We might not get big numbers to comprehend the phone in the ‘camera war’ list where most of the phones will find themselves. But, it does ensure outputs you will like. The main camera produces images that are mostly colour-accurate and detailed. Although, the colour palette has mostly been to the warm side.

That said, the colour reproduction is certainly better than the cameras on Xiaomi’s budget offerings, which were mostly saturated. This stands true for humans featured in your photos: you won’t get the reddish skin tones and it tries to capture colours akin to the actual skin colour, the clothes you are wearing, and much more.

The 48MP mode enables more details and zooming capabilities. While most of the images in this mode follow the lead of the default one, there are instances when the 48MP option calls for better exposure. 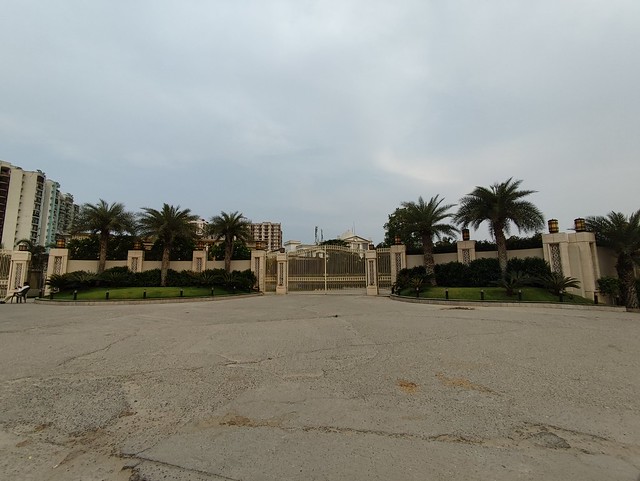 The ultra-wide lens is really ultra. It captures a good amount of area without any edge distortion. This proves helpful in clicking picturesque views, which can be a rarity these days. But, the main camera has better exposure. The macro mode has my heart. Xiaomi phones prove that macro modes are not plain useless and can give out something you will end up liking. Much like the Redmi Note 10 Pro, the macro mode on the Mi 11X clicks quite an image. Good autofocus helps in this to a great extent.

Speaking of zoomed-in photos, the 2X zoom works well without bringing graininess into the scene. The 10X digital zoom follows the footsteps and is useful to capture anything at a significant distance. The zooming capabilities turn slightly grainy in low-light, though. As for the night mode, it certainly calls for better exposure and details. This, however, isn’t applicable to the 48MP mode. Portrait mode is decent enough to create a decent bokeh effect.

The front camera has also been good, with it highlighting details and close-to natural colours. It was able to pick up my hair colour well, so I don’t have any complaints. There’s the Beauty mode, for blemish-free selfies and if you are into them, it will be helpful for you.

The Qualcomm Snapdragon 870 chip, which is being spotted on many phones these days, might not be a fireball as compared to its ‘on-paper senior’ Snapdragon 888, but it is quite a powerhouse a phone can have.

With 8GB of RAM, Snapdragon 870 is able to handle most of the tasks you would do on a smartphone. Calling, messaging, clicking photos, watching loads of videos, window shopping, and occasional gaming summed up my basic usage. This was well taken care of and I hardly remember if the phone lagged during my two weeks’ usage period. Despite the presence of loads of apps in the background, I didn’t come across any multitasking issues.

Gaming was smooth too. From light games like Candy Crush Saga and Brain Test (I like myself some brain teasers!) to graphic-intensive games like Call of Duty Mobile (CoD), the phone did a good job. I played CoD at a very high graphics and frame rate, which is a combination needed for a smooooth gameplay without much battery drop. Although the lower you go on these aspects, the more battery will be saved. This also caused heating issues: the phone ended up getting warm after 15 or 20 minutes of gaming.

There’s 128GB of storage as part of the package that is enough to go around with whatever we have to store. There’s also a 6GB of RAM/128GB of storage variant to go for. Sadly, the Mi 11X doesn’t support a memory card, which can prove disappointing for those who rely on those babies.

The dual stereo speakers, Hi-Res Audio, and Dolby Atmos helped in a loud and balanced audio output. In a small to medium-sized room, this phone dismisses the need for an external Bluetooth speaker. Among others, the calling proved decent without any echo and the side-mounted fingerprint scanner is quite snappy.

There is a 4,520mAh battery, which is sufficient for over a day’s usage. Some extensive usage can dip it to a day. But, this is pretty cool too. The battery supports 33W fast charging, which goes from zero to 100 per cent in about 50 to 55 minutes. This goes well with Xiaomi’s claim but can be improved to reduce the charge time to 35 to 40 minutes to rival Realme, OnePlus, and more. After my long-awaited meet and greet with the MIUI 12 recently, I got a chance to know it better and this is when my explore mode was turned on. It takes time to adapt to MIUI and eventually you start to realise that it is quite versatile and useful. It has got better and this is quite visible in the Mi 11X. You won’t get to see any annoying notifications from the Xiaomi apps, the themes get better, and there isn’t much bloatware. But, these things are perceived differently by different people. The presence of Netflix and Amazon India isn’t bloatware for me but might be for some. Although, during lockdown times, these two apps are quite the things we need on our phones.

This time, I found the GetApps app to be helpful as an additional source of getting apps. Although, it fails to download the now-popular Urbanic shopping app. Plus, the calculator app does more than just BODMAS: I was able to calculate my BMI too. Overall, I am enjoying MIUI and if you have any inhibitions about it, just give it a try to get rid of them.

The Xiaomi Mi 11X is quite a performer at a starting price of Rs 29,999. Certainly superior to the Pixel 4a and the OnePlus Nord that fall in the same price bracket. Also a tough competition to the direct rivals (the OnePlus 9R, Vivo X60 Pro, iQOO 7) with a noteworthy performance besides the much lower price.

But, we can’t ignore some of the misses on part of the phone. You won’t get the best camera performance, the fast charging can be better, it lacks on the display brightness part, and if this bothers, the device is a dust magnet.

That said, the Mi 11X still manages to take forward the concept of a flagship killer and trust me, it is one. This is quite a reason for you to add the phone to your cart if that’s the budget you got.