I have been using the mid-range offering for a little more than a week to push it to its limits. Here is my Xiaomi Redmi K20 review.

Xiaomi recently launched its latest Redmi K20 series in India. This new series includes two smartphones, including the Redmi K20 and the Redmi K20 Pro. The latter will compete with flagship smartphones in the market such as the OnePlus 7 Pro, Samsung Galaxy S10, Asus 6Z and more. The Redmi K20, on the other hand, competes with the likes of Realme X, Oppo F11 Pro, and Vivo V15 Pro to name a few. Also Read - Xiaomi Redmi K20 Pro performs better than the OnePlus 7 Pro in performance; benchmark tests reveal

Prices for the Redmi K20 start at Rs 21,999 and go up to Rs 23,999 for the top model. The pricing strategy, however, has caused a bit of a backlash from a small section of buyers. The issue escalated to an extent where Xiaomi India Managing director Manu Kumar Jain had to issue a statement addressing the concerns. I have been using the Xiaomi Redmi K20 for over a week now, and it is clear that the price tag doesn’t always tell the complete story. Here’s our Xiaomi Redmi K20 review. Also Read - Xiaomi Redmi K20, Redmi K20 Pro first sale today via Flipkart, Mi.com: Price in India, offers, specs

The first thing we need to talk about is the Redmi K20’s gradient finish design. This may not be the first device to boast gradient colors, but the texture is quite unique. As soon as you take the smartphone out of the box and glance at the back, you will be spellbound by the impressive design. Xiaomi is calling this unique finish as Aura Prime design and it is something that one has to experience. Xiaomi has also added Corning Gorilla Glass 5 on the front to ensure that the display is protected against any accidental damage. Another interesting component that Xiaomi has added is a Blue color LED light indicator on the sides of the pop-up camera. This helps attract the attention of users to the front camera for proper selfie. The LED light also works as a notification indicator on the top side of the smartphone. All these elements come together to really scream premium build quality. Using the smartphone actually makes one feel like Xiaomi has taken its time to craft this smartphone. The interesting part to note here is that both the flagship-grade Redmi K20 Pro and the mid-premium tier Redmi K20 feature identical design and build quality. The Redmi K20 flaunts a 6.39-inch AMOLED panel with FHD+ resolution and 19.5:9 aspect ratio. Similar to any AMOLED display, the colors produced are punchy with deeper blacks in comparison to LCD screens. In fact, Xiaomi has also added a system-wide Dark mode in MIUI so that users can get rid of blinding white theme across the OS. The smartphone maker has also added support for 100% DCI-P3 color gamut on the smartphone. Digging deeper in the display section, the Redmi K20 also comes with Widevine L1 certification. This means that Netflix subscribers can enjoy content in FHD resolution along with HDR color support. The difference between HDR and non-HDR content may not be directly visible, but the support is quite impressive. The display features impressive brightness though things may not be perfect under direct sunlight. One still ends up hunting for shade to properly see the content on screen due to the reflective nature of the screen.

The display also comes with a seventh-generation under-display optical fingerprint scanner with an increased surface area. The performance of the scanner is quite snappy and you don t have to wait as it works near instantaneously.

As far as performance is concerned, the Redmi K20 is powered by a Qualcomm Snapdragon 730 SoC. This is the first smartphone to launch in India with the Snapdragon 730 SoC in the Indian market. Also on offer is 6GB RAM, and up to 128GB internal storage. There is however no support for an external microSD card. Talking about performance, yes, this smartphone can easily run PUBG Mobile at High frame rates and HD resolution. I did not face any lags, jitters, or crashes during my testing time. The smartphone did heat up within minutes of starting the gaming sessions or long photo session. However, it also managed to not throttle the performance while cooling down somewhat faster than most glass-back smartphones. The smartphone managed to run high-end games like Real Racing 3, Shadow Gun Legends, and Dead Trigger 2. Beyond this, the smartphone performed everyday tasks and managed heavy multitasking without breaking a sweat. Audio quality parameters such as loudness and clarity were excellent during calls with bottom-firing built-in speaker delivering adequate sound while watching YouTube videos and movies.

Talking about the software, the Xiaomi Redmi K20 features the usual Android 9 Pie-based MIUI 10 skin. MIUI skin has been the bread and butter of all Xiaomi smartphones since the beginning so this aspect should not really surprise anyone. The company also rolled out an update during my test period to bring the version number to MIUI 10.3.6 with June 2019 android security patch. The software on the Redmi K20 comes with two notable changes. Focusing on the first one, Xiaomi is now shipping the Redmi K20 series with Poco Launcher out-of-the-box. The second notable change is removing advertisements from within the operating system. Xiaomi has stuck to its promise that it will not deliver any advertisements inside the OS. However, that really has been replaced by push notification-based ads from Xiaomi apps such as the GetApps built-in App Store, and Mi Video . It is also amusing to see that launching an app once will result in about 4-5 notifications in a single day. Thankfully, these push notifications can easily be disabled with in-app settings. Beyond this, there is nothing out of the ordinary of anyone who has used MIUI in the past. We get a number of in-house apps such as Mi Video, Themes, GetApps, Mi Browser, Music, and Compass. Others apps include Mi Community, Mi Calculator, Notes, Security, Screen Recorder, Recorder, Scanner, ShareMe, Weather, and more. It also comes with built-in bloat including Dailyhunt, Block Puzzle Guardian, and Ludo Master.

The Redmi K20 sports a triple rear camera setup with a 20-megapixel selfie camera embedded in a pop-up mechanism. At the back, we get a primary 48-megapixel sensor with f/1.8 aperture. The setup also features an 8-megapixel sensor with a telephoto lens along with a 13-megapixel resolution with an ultra-wide-angle lens. The smartphone also features a dedicated Dual-LED flash unit on the back for better images in low-light conditions. It also features a dedicated software Night mode to make things better. The Redmi K20 manages to capture great images during the day. However, things are just mere OK during night or in challenging lighting situations. The images captured in ample light contain good amount of details, good color reproduction, and a fair amount of texture. It is worth noting that the HDR mode is turned off by default. This feature is fast becoming an Auto setting in other smartphones. Toggling the option on does manage to improve the dynamic range of the images with improved color reproduction. The ultra-wide lens also manages to handle barrel distortion in a good way during software processing. You can check the camera samples to make your observations about the camera quality of the smartphone. 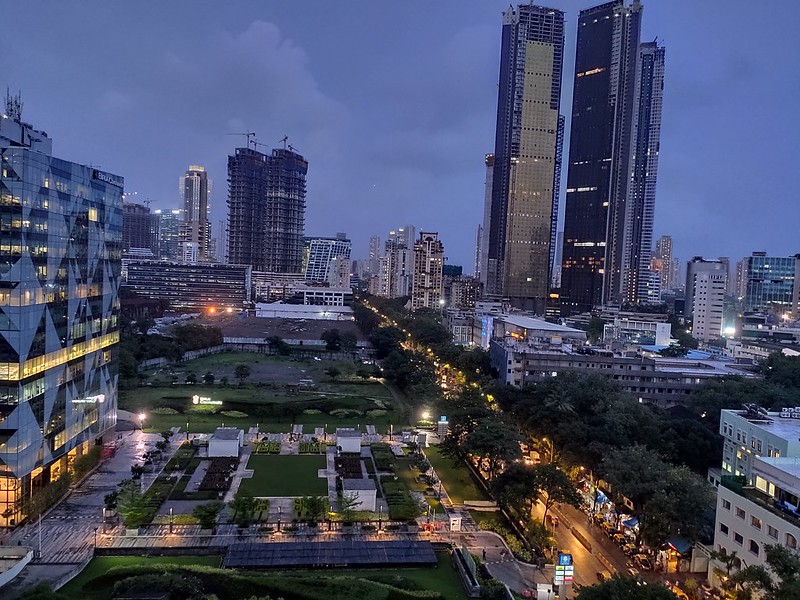 However, in low-light conditions there are not much details, texture or proper colors in the images. In fact, the images usually turn out to be somewhat muddled due to lack of light. The dedicated Night mode does take a bit longer to take multiple images and then fuse them while processing. However, the results are not that stellar as it only, slightly improves the details and texture of the images. Xiaomi could use some software patches to improve this aspect of the smartphone. The images shot on the Redmi K20 can compete with other devices in this range. But, they are no match for images taken from flagship devices. The camera app also comes with a number of different modes including Short Video , Video , Photo , and 48M . Other modes include Portrait , Night , Panorama , and Pro . The app also comes with buttons to switch between the 0.6x zoom (ultra-wide), 1x (regular), and 2x (telephoto) modes.

The smartphone comes with a 4,000mAh battery along with 18W QuickCharge 4.0 technology. I have tried to push the battery to its edge with extremely heavy usage. During a regular weekend, the Redmi K20 managed to last for about 8-8.5 hours. This number shot up to 11-12 hours on workdays when I don t really have time to mess with my smartphone.

The question of Price

As mentioned, some potential Redmi K20 buyers took to the internet asking Xiaomi to reduce the price of the smartphone by up to Rs 2,000. Some even demanded that the base model should offer at least 128GB storage. One user has also started a Change.org petition, which has seen thousands of sign. Xiaomi has already revealed that the cost of K20 depends on the higher cost of the Snapdragon 730 SoC. In our opinion though, the the price tag doesn’t really paint an accurate picture. The pricing should be considered with the fact that the buyer is getting the latest Snapdragon 700 series processor. For instance, the recently launched Samsung Galaxy A80 with the same processor is priced starting at Rs 47,990. Most users are comparing the smartphone with the Realme X that features somewhat similar hardware. But, it also features a processor that is older and cheaper in comparison.

Verdict: Should you buy the Xiaomi K20 Pro?

When reviewing the Xiaomi Redmi K20, I couldn’t help but get a sense of D j vu. I am referring to this because of the impeccable package that Xiaomi has crafted for its users. The company has constantly taken feedback from users, and improved its offerings over time. With the new Redmi K20 series Xiaomi has taken the fight to Realme X, OnePlus 7, Asus 6Z, Samsung Galaxy M40, and more. It does need to improve the camera quality in low-light conditions. But, beyond that, the Redmi K20 looks like another success story for Xiaomi.